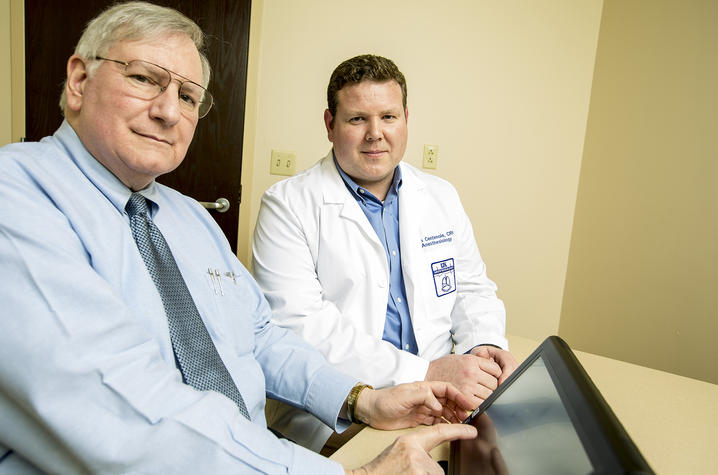 LEXINGTON (Feb. 15, 2017)—No patient wants to remember the traumatic experience of going under the knife.

With the conveniences of modern medicine, anesthesiologists and nurse anesthetists erase the memory and pain of invasive surgeries by administering medicines that induce relaxation and unconsciousness. Patients awake from a deep sleep with no memory of the surgery, the incision, or the physical harm done to their bodies.

But 10 years ago, Zohn Centimole, a nurse anesthetist at UK HealthCare, noticed his elderly patients were concerned about short-term memory loss, which they attributed to anesthetics. While only temporary, the cognitive deficits caused by anesthesia can linger for several days post-surgery, a period of time when important medical decisions and conversations take place.

One of Centimole’s senior patients, who had experienced memory changes after a previous surgery, feared the same effect as she prepared for another surgery. Rather than worry about her postoperative pain and recovery, the patient was fixated on whether she would retain her mental capacity post-surgery.

“My conversation with her that day was one of those imprinting memories,” Centimole said. “Her fear was so sincere and impactful that I can still see her face and everything about the situation.”

Centimole recently defended his doctoral dissertation in the UK College of Nursing, which found anesthesia guided by EEG-derived monitoring was superior to the standard administration and effective in reducing cognitive decline at three to five days postoperation. The Bispectral Index System (BIS) measures EEG and, through a proprietary calculation, converts changes in real time to a score, which anesthesia providers associate with depth of consciousness.

The CANTAB-MCI (Cambridge Cognition) cognitive battery was used to evaluate patient cognitive performance preoperatively, three to five days postoperatively, and three to five months postoperatively. With its touch-screen format, the battery reduces administrator bias and is cost-effective. The EEG-guided technique showed to reduce the cognitive deficits experienced in the postsurgical period, with patients whose anesthesia was conducted through this method reporting higher cognitive functioning immediately after their surgery.

Collaborating with faculty members in the UK Department of Surgery, the UK Sanders-Brown Center on Aging, and the UK College of Nursing, Centimole conducted an experiment testing the cognitive functioning of surgical patients whose anesthesia levels were monitored through a cognitive battery against patients who received surgery without the cognitive battery and a control group of individuals unaffected by anesthesia. Centimole recruited patients for the study in the preoperative clinic, often recruiting a spouse as the nonsurgical counterpart for the control group. Eighty-eight surgical patients were randomized to the BIS cognitive battery condition or the nonbattery condition. Both experimental groups, as well as individuals in the nonsurgery control group, completed the CANTAB neuropsychological functioning test. The test measures the test taker’s short-term memory, reaction time, verbal memory, and visual learning capabilities.

The 39 surgical patients who received the treatment, or BIS, condition demonstrated high levels of cognitive functioning postsurgery. Centimole also found that patients who smoked reported lower cognitive function postsurgery, suggesting a correlation between smoking and lower cognition after surgery. The results of the study suggest that EEG-derived technology has the potential to assist anesthesiologists and nurse anesthetists in tailoring their care to individual cognitive characteristics.

“We were looking for a way to assess cognitive frailty in patients,” Centimole said. “Being precise and tailoring anesthesia will vary from patient to patient. EEG-derived technology allows you to balance exposure without unwanted side effects. We want to keep tight control over exposure, and this is what that device was engineered to do.”

Centimole believes EEG-derived devices can enhance care and improve engagement and alertness in patients who were disadvantaged by the memory loss caused during their surgery. Further, the CANTAB-MCI battery was cost-effective and showed the potential to help providers evaluate frailty in patients preparing to undergo surgery.

“The novelty of the project is knowing there is a relationship between EEG-guided anesthesia and cognitive function,” he said. “But we also present evidence that this cognitive battery is financially appropriate and has a great ease of use.”

UK is the University for Kentucky. At UK, we are educating more students, treating more patients with complex illnesses and conducting more research and service than at any time in our 150-year history. To read more about the UK story and how you can support continued investment in your university and the commonwealth, go to: uky.edu/uk4ky. #uk4ky #seeblue