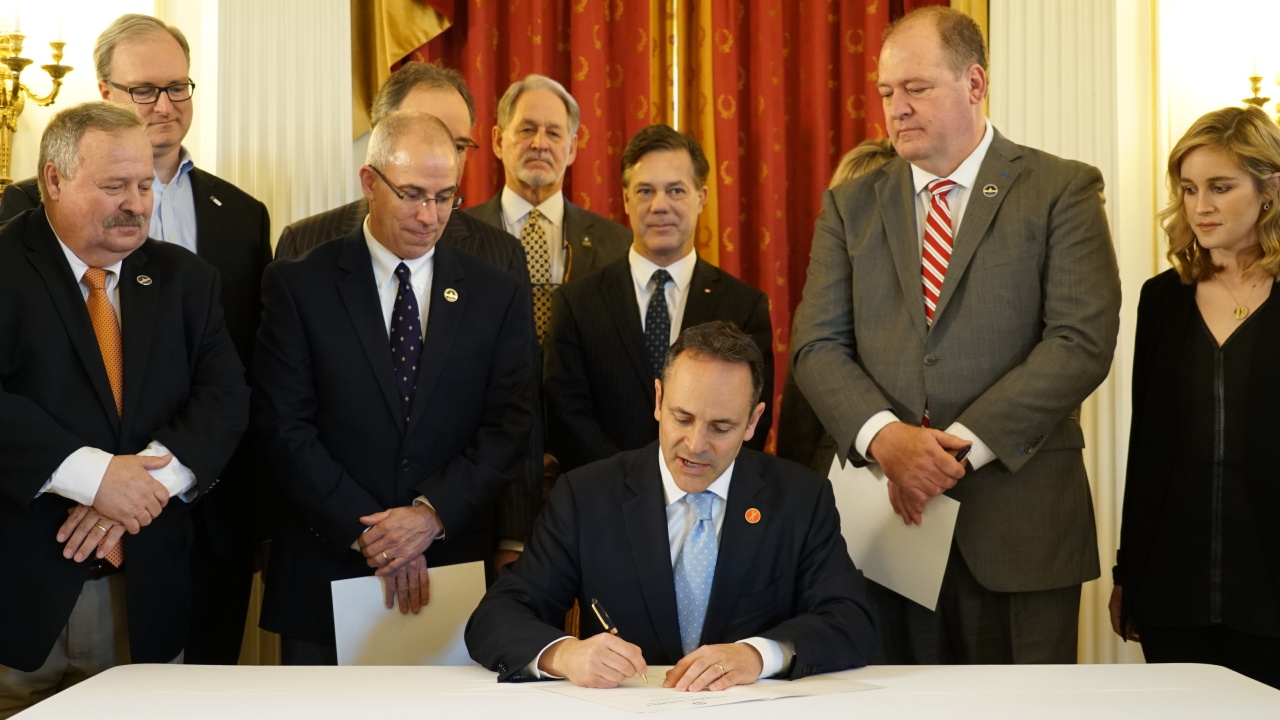 FRANKFORT (Feb, 15, 2017)—Gov. Matt Bevin today ceremonially signed House Bill 1, which provides right-to-work guarantees to all Kentucky workers, in a midday gathering with legislators, economic developers, and business advocates from across the state.

This historic new law protects employees in the commonwealth from being forced to pay union dues in order to keep their jobs. Kentucky becomes the 27th state to enact such protections, and experts say the measure will spur economic growth while boosting individual incomes.

“This is an extraordinary opportunity to ceremonially sign something that has been a long time coming,” said Gov. Bevin. “We have gotten, almost on a daily basis, unsolicited comments from economic development, workforce development, and site selection folks who have said: ‘Wow, now we believe it—Kentucky is open for business.’”

“This will mean incredible new opportunities for the commonwealth. We are already talking to people who were not going to come and consider us until this was done.”

“Passage of right-to-work legislation in Kentucky was a critical step toward job growth and business investment across the state,” said House Speaker Jeff Hoover. “Not only does the bill position Kentucky on level ground with our neighbors in the fight for jobs, but it creates additional freedom for Kentucky workers by allowing them the choice to join a union or not—and as a result take home more money. Kentuckians deserve every opportunity to have access to, and benefit from, good paying jobs. I’m proud to have played my role to ensure passage of this game-changing bill.”

“Right-to-work legislation has been something we have passed in the Senate for many years, only to fall on deaf ears at the hands of the former Democratic majority,” said Senate President Robert Stivers. “We have seen how right-to-work can grow businesses and create jobs in other states, so we knew we had to pass this bill once the House flipped. I applaud the work of Speaker Hoover, the rest of my colleagues in the legislature, and Governor Bevin, for helping make Kentucky right-to-work and open for business.”

“Right-to-work legislation is vital to attracting higher levels of advanced manufacturing jobs to the commonwealth,” said Rep. Jim DeCesare, chair of the House Committee on Economic Development and Workforce Investment. “It was a privilege for me to shepherd this legislation through the Economic Development and Workforce Investment Committee, as well as on the floor.”