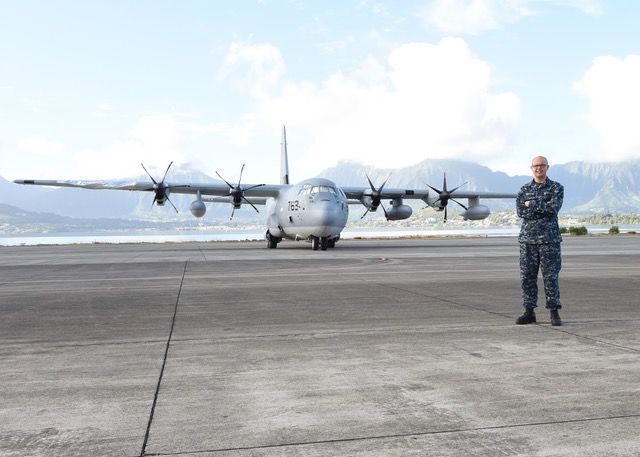 Seaman Nikolas Etherton is assigned to the Navy’s U.S. Pacific Fleet Headquarters at Pearl Harbor. Etherton is responsible for maintenance on the P-3 aircraft. Photo: Navy Office of Community Outreach

PEARL HARBOR—As the nation pauses to remember the attack on Pearl Harbor, which occurred 75 years ago on Dec. 7, 1941, the occasion has special meaning for a Owensboro, Kentucky native who is serving in the U.S. Navy in the very location that drew the United States into World War II.

“I am grateful to be serving here during such an important time in history,”

Seaman Nikolas Etherton, a 2014 Apollo High School graduate, is assigned to the Navy’s U.S. Pacific Fleet Headquarters. According to Navy officials, the U.S. Pacific Fleet is the world’s largest fleet command, encompassing 100 million square miles, nearly half the Earth’s surface, from Antarctica to the Arctic circle and from the West Coast of the United States into the Indian Ocean. The U.S. Pacific Fleet consists of approximately 200 ships/submarines, nearly 1,100 aircraft, and more than 140,000 Sailors and civilians.

Etherton is responsible for maintenance on the P-3 aircraft.

“I like that my job gives the opportunity to work with my hands,” said Etherton. “It’s an honest work.”

Being stationed in Pearl Harbor, often referred to as the gateway to the Pacific in defense circles, means that Etherton is serving in a part of the world—the Pacific—that is taking on new importance in America’s national defense strategy.

Accordingly, the Navy is basing approximately 60 percent of its ships and aircraft in the region. Officials say the Navy will also provide its most advanced warfighting platforms to the region, including missile defense-capable ships; submarines; reconnaissance aircraft; and its newest surface warfare ships.

“I am grateful to be serving here during such an important time in history,” said Etherton.

While much as changed in 75 years, American Sailors’ core attributes of toughness, initiative, accountability and integrity remain today. The last legacy of the heroism and determination exhibited on Dec. 7th, 1941 is the heritage Etherton and other service members remain committed to live up to in the 21st Century.

“It’s important for those of us serving in Pearl Harbor today to remember the sacrifice of those who served before us,” said Admiral Scott Swift, Commander, U.S. Pacific fleet. The important work we do everyday honors those who were here 75 years ago and is a testament to the enduring value of our navy’s mission.”