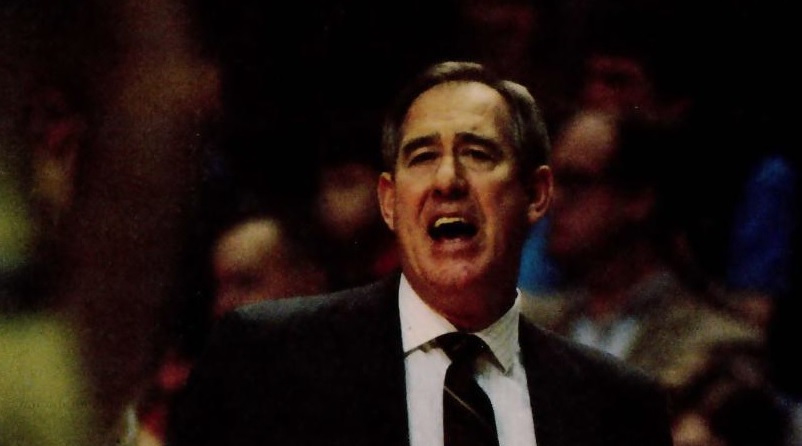 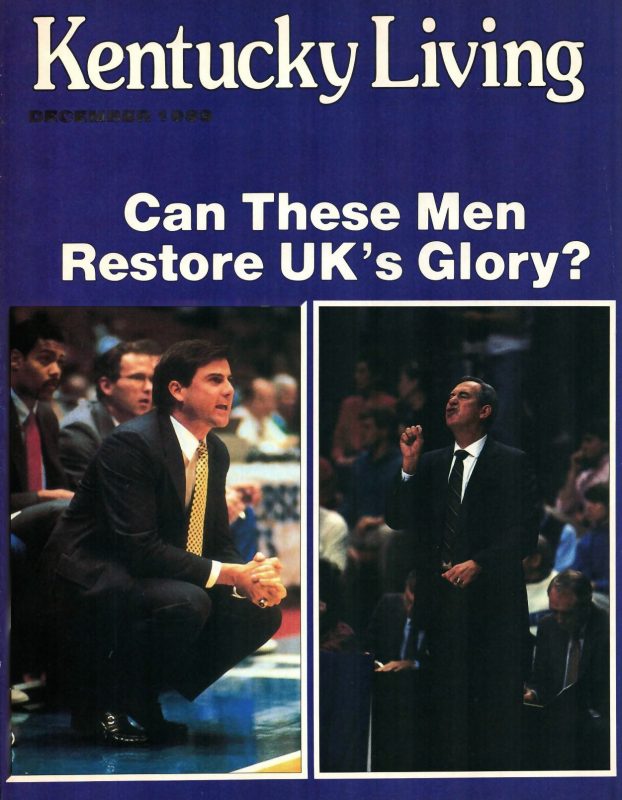 University of Kentucky athletics legend C.M. Newton died on Monday, June 4 at the age of 88. An inductee in the Naismith Memorial Basketball Hall of Fame, Newton coached at Transylvania, Alabama and Vanderbilt before becoming UK Athletic Director in 1989. The article below is reprinted from the December, 1989 Kentucky Living, upon Newton’s hiring of Rick Pitino as the university emerged from a basketball recruiting scandal.

C.M. Newton and Rick Pitino have a big job ahead making Kentucky a winner again both on and off the court.

The dark clouds that hovered earlier this year over the proud University of Kentucky basketball program have disappeared. With the start of a new season the university is embarked on the road to recovery. Not only is it striving to return to national prominence on the basketball floor, but more importantly, it hopes to prevent any recurrence
of the improprieties that brought it shame and dishonor. And the responsibility for turning the program around has been delegated to an odd couple — C.M. Newton and Rick Pitino. 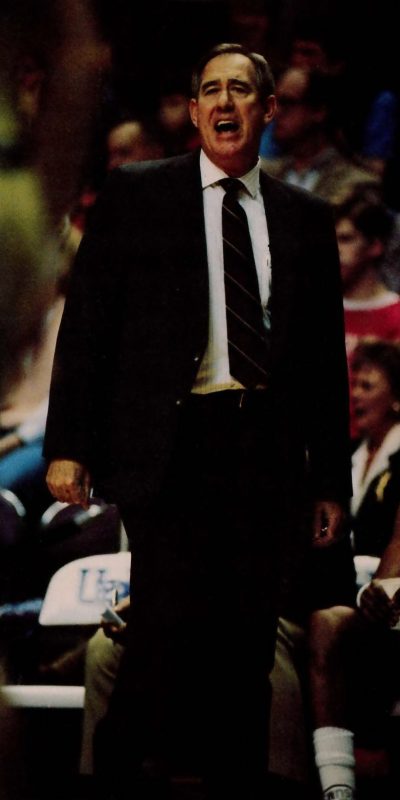 Newton, a slow-talking southerner, has been athletic director since April 1. While viewed as the quintessential
“Southern Gentleman” by many, he’s a no-nonsense, hard-nosed administrator. Pitino a fast-talking New Yorker, was hired as basketball coach in June. Although only 36, he has gained a national reputation for reviving programs in quick and honest fashion.

Last May, the National Collegiate Athletic Association punished UK for recruiting infractions with a two-year
ban on post-season play, one year without live television coverage and a limit of three scholarships in each
of the next two recruiting seasons. By the time the NCAA imposed its penalties, Kentucky president David
Roselle, had already begun to steer the beleaguered athletic program on a proper course with several administrative changes. The popular Cliff Hagan had been forced to resign as athletic director a year ago in November. Three months later, Roselle recommended to the board of trustees that Newton be hired to clean up the tarnished program. The president called Newton a man of “proven ability and the highest personal and professional integrity.”

Jock Sutherland, one-time assistant and long-time friend of Newton, said, “I don’t know how many times the
perfect job and the perfect man for that job come together, but this is one of those times.” The 59-year-old
Newton, who was Roselle’s choice from the beginning, understood firsthand the Kentucky basketball tradition,
having played for the legendary Adolph Rupp on the school’s national championship team in 1951. His first
coaching job was at Transylvania University in Lexington from 1955 to 1968. He then guided Alabama to three Southeastern Conference titles and a 211-123 record in 12 seasons. Paul “Bear” Bryant, who brought the coach to Alabama, once said: “C.M. Newton is a winner, and that’s important. But more than anything else, he wins or loses with class and that’s more important.” It is something Newton has mentioned more than once since returning to Kentucky. “When it is rebuilt, it will be a program that exudes class,” he declares. No one doubts him.

Newton served as assistant SEC commissioner for one year and coach at Vanderbilt for eight seasons before
answering the call of his alma mater. “The opportunity and the challenge, and really the great love and respect I have for (Kentucky) is something that made me want to make the change,” he said after accepting the offer.

“I truly believe 99-1/2 percent of all people in Kentucky want to win and do it the right way,” he says. “And, believe me, it can be done. It’s done at Indiana, it’s done at North Carolina, it’s done at Duke. And we’ve done it here.” One of his first moves was to name John Bostick, his longtime assistant at Alabama and Vanderbilt, as assistant director of athletics for compliance. Newton has traveled from Ashland to Paducah and from Covington to Somerset, delivering the message that the basketball program will regain the stature it held in past seasons.

Newton’s biggest decision in his first few months was to name a coach to succeed Eddie Sutton. Although Kentucky was considered one of the best coaching positions in the country, it wasn’t going to be easy finding the right man for the job. Not only would a new coach face the NCAA sanctions, he would also inherit a team that finished 13-19 in 1988-89, the school’s first losing record in 62 seasons.

Newton approached such luminaries as Arizona’s Lute Olson and Seton Hall’s P.J. Carlesimo. He got polite rejections in return. One name that surfaced throughout the searching process, however, was that of Rick Pitino, the coach of the professional New York Knicks. The youthful Pitino was regarded as a master rebuilder. At the tender age of 25, he
became head coach at a down-trodden Boston University, a school that had won only 17 games the two previous seasons. Under Pitino’s enthusiastic and energetic approach, Boston went 17-9 his first season. In five years, he
compiled a 91-51 record and became the most successful coach in the school’s history. 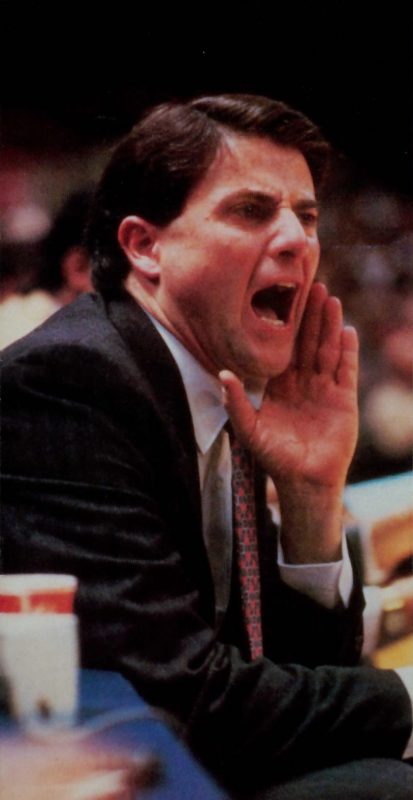 Pitino left Boston to serve as an assistant for two seasons with the Knicks under Hubie Brown. He returned to the college ranks at Providence in 1985, a year after the Friars had limped through an 11-20 season. His first team went 17-14 and played in the National Invitation Tournament.

The next season Pitino and Providence gained national attention by compiling a 25-9 record and reaching the NCAA Final Four. Pitino left Providence in 1987 to take the head job with the struggling Knicks. In the previous two seasons, they had a combined 71-175 record, worst in the National Basketball Association. Again Pitino turned things around. His first team went 38-44 and reached the playoffs. Last season, they were 52-30 in claiming the NBA’s Atlantic Division title.

Despite his success in the Big Apple, Pitino wasn’t happy. He longed for the serene atmosphere of college life. “We looked back everyday of our lives and we missed Providence,” he said of his days with the Knicks. “We missed the environment. I wanted to be a college coach and part of a college community and part of a lifestyle that’s important to the Pitino family.”

There was the competitive side that tugged at him to complete the remaining three years of his Knicks contract. “I gave up a lot,” he admitted. “I gave up a potential (NBA) championship to come to Kentucky. The lure is the family atmosphere. I wanted to be a college coach.”

On June 1, Pitino was introduced as Kentucky’s new coach. He was given a seven-year contract worth an estimated $900,000 annually. A beaming Newton declared, “We have just named the very best coach, I think, in the country.” More importantly, the hiring signified a giant step forward for the university only three weeks after the NCAA sanctions.

“Today begins a new day in Kentucky basketball,” Newton told the gathering of reporters and trustees. “Today is the first step in rebuilding this program.”

With only eight scholarship players on the squad because of three defections related to the NCAA ruling, Pitino hasn’t promised overnight success. “It’s a tradition for me to say we’ll win and we’ll win right away. Whether that means in terms of the losses and wins that show up I’m not sure. I think Kentucky people and all supporters of Kentucky basketball, forgetting the score, will leave that arena thinking that the basketball team is a winner.”

The NCAA matter doesn’t help, but Pitino fully accepts his charge. “The sanctions and probation just make it
a little tougher, but we will overcome all obstacles, making Kentucky basketball rich once again.” Pitino doesn’t sacrifice discipline for the sake of victories. He once told an interviewer he admired the late Vince Lombardi, a coach known for his strict code of discipline with the great Green Bay Packer team of the 1960s.

“He’s the person in life that I’ve tried to emulate in that he preached and practiced discipline with his teams,” he said. “Every winning team has to have a certain amount of discipline. He brought that to his teams but still had the respect of his players.”

That message has already been sent to the Kentucky players. This past summer, guard Derrick Miller skipped a few of his classes. When Pitino found out, he confronted the errant player and told him he’d miss the same number of practices.

Pitino also doesn’t have much use for boosters, who have been blamed for many of the problems in collegiate athletics. “Stay away from practice and players,” he says. “No one will have anything to do with the University of Kentucky basketball program other than our coaching staff, athletic director and certainly our faculty.” He has managed to minimize distractions by closing practices and keeping the players involved in studies and basketball.

He stresses education. “Young people think of today, that’s the only thing in their life. They’re not thinking of tomorrow or next week or next month. They’re just trying to get through today. We want to take average students and make them good and take the good students and make them great. As passionate as I am about the game of basketball, I’m more passionate about seeing them overachieve in the classroom because that flows onto the basketball court.”

As with other Kentucky coaches, Pitino is moving up the local celebrity ladder. People have even driven past his home that is under construction to get a chunk of dirt.

He promises a run-and-gun game that should please Kentucky’s hardcore fans and bring the best out of the players. Billy Donovan, one of Pitino’s assistants, was a member of Providence’s Final Four team in 1987. He is a believer in Pitino’s style of coaching. “The amount of time he spends with players individually and helping them improve is
his biggest factor,” Donovan says. “He’s going to be in the gym sweating with them and making them improve. I think what happens is that it lifts the players’ confidence level once the game starts because Coach Pitino gives you a lot of freedom offensively.”

The players have a new sense of optimism after a year under the dark clouds. “Everybody is just so excited about this season and I think that can be attributed to the attitude of the coaching staff, especially Coach Pitino,” says forward Reggie Hanson of Somerset. “He never says anything bad or downgrading about us or to us. He’s just always upbeat.”

Richie Farmer, a guard from Manchester, adds, “I think everybody — the fans, players, students, just everybody —
is glad the whole NCAA thing is over. I think everybody was really worrying about what was going to happen. We’re just happy that we’re going to be able to play.”

Pitino, always the optimist, sums up his attitude about the basketball program more succinctly: “I don’t look at the past,” he says, “I look at the future.”