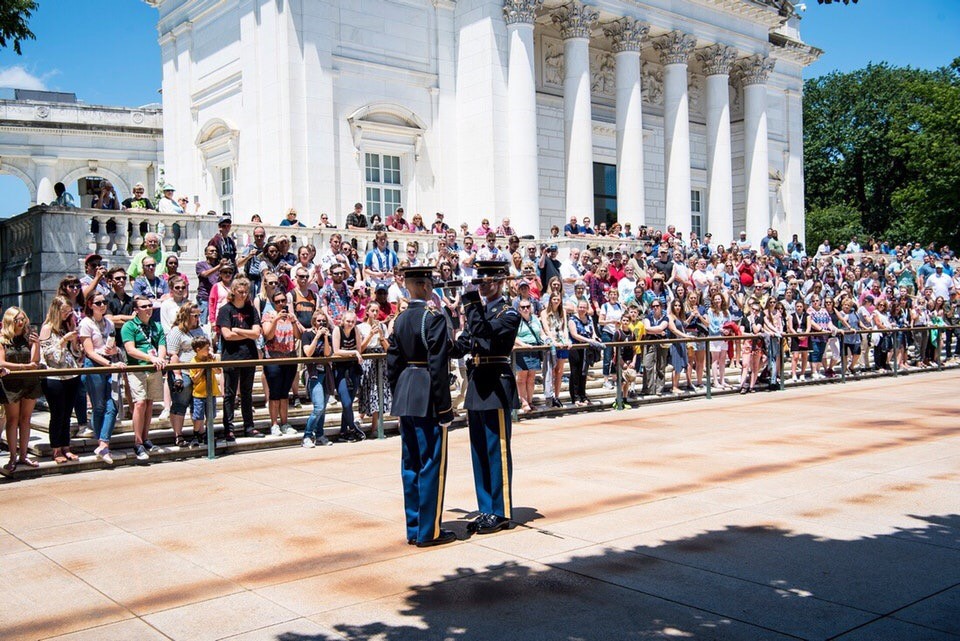 Meade County High School’s Evan Smiley is one of 90 high school seniors from Kentucky participating in the Washington Youth Tour, an annual program of America’s Electric Cooperatives. Kentucky Living is proud to share their stories.

Courage. By definition it means, “the ability to do something that frightens one.” But to our nation’s greatest heroes, courage is much more than that. Courage is going above the call of duty and serving in one of our country’s gruesome wars and served as leaders not just in their battalions, but for their communities and their country. Many of these heroes gave the greatest sacrifice to prepare, preserve, and protect the rights of every American.

On June 12, 90 high school seniors and 15 chaperones representing Kentucky’s electric cooperatives on the Washington Youth Tour witnessed a testament to that courage at Arlington National Cemetery – the United States’ most sacred memorial ground. Participants toured the roughly 562 acres where 420,000 fallen soldiers are entombed, dating back as far as 1864.

Youth tour delegates are rising high school seniors selected for their academic performance, social involvement, and personalities. The Kentucky Association of Electric Cooperatives (KAEC) has coordinated the tour for Kentucky co-ops since 1972, when 18 students and four chaperones made the trip. In all, the more than 1,800 delegates from across rural America are in Washington, D.C. to learn about the political process, interact with elected officials and gain an up-close understanding of American history.

For many participants, including myself, Arlington is the final resting place of close relatives and friends. Therefore, when the opportunity presented itself to visit the gravesites of these loved ones, participants were eager to pay their respects. Arlington even provides a smartphone app known as “ANC Explorer” that allows the user to identify the exact location and directions to a particular grave. A shuttle guided tour allows visitors to explore an area and simply “hop on” the next shuttle. Sometimes, the shuttles are delayed by funeral processions which average 20-30 every weekday and ten on Saturdays.

Arlington National Cemetery has a unique history that involves many historical figures. The land was once a plantation owned by the adopted grandson of President George Washington, whose daughter married the Confederate General Robert E. Lee. During the Civil War, the Lee’s abandoned Arlington House to fight in the war. Meanwhile, the Union Army used it as a headquarters. Arlington House overlooks the great national cemetery and serves as a memorial for Lee. Many great figures have visited and admired the home. President John F. Kennedy stated that he loved the view from Arlington House that he could stay there forever. Just eight months later, he was assassinated and was laid to rest in Arlington.

Kennedy isn’t the only President buried at Arlington, however. President William Howard Taft also wanted his final resting place to be there, joining the long list of great leaders and patriots within the hallowed grounds.

Arlington is home to one of the most solemn places of United States History – the Tomb of the Unknown Soldier. The tomb is guarded 24 hours a day, 365 days a year despite any weather conditions. Participants of the youth tour were able to witness the legendary changing of the guard. Two of Kentucky’s youth tour delegates, James Shaddox and Tori Drew, placed a wreath on the tomb on behalf of Kentucky’s electric cooperatives. Many participants said this was their favorite part of the entire tour of Washington DC. The Tomb of the Unknown Soldier is one of many memorials at the cemetery including the Coast Guard Memorial, Chaplains’ Hill, and the Space Shuttle Challenger Memorial.

Arlington National Cemetery is a treasured part of the youth tour itinerary, a place of courage and honor for our country’s finest men and women.