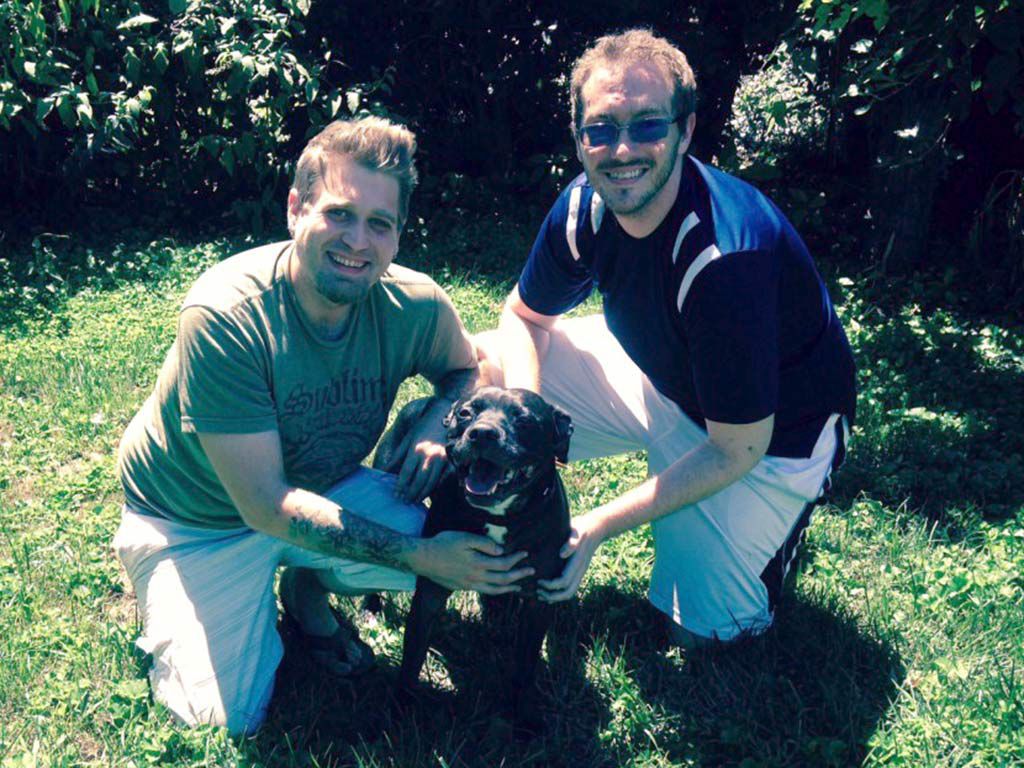 Considering the fan base this dog had on Facebook, I’m betting many of you remember Blake from my Creature Comforts column a couple years ago, “Saving Blake.” (click here for story) Blake was the “unadoptable” black pit bull that received an outpouring of love from people all over the country as they read about his journey of leaving a shelter, being rehabilitated, and his search for a home. He was my personal project dog, and one of the happiest days of my life was when he was adopted into the perfect home by Austin Sheehan of Louisville.

So when I got a frantic call from Austin recently that Blake was missing, I ran to his house to join the search. Austin was crying, saying, “My son is missing, I’ve got to get him back, that’s my child.”

Blake has always had a terror of storms; the previous night, Austin tried to get Blake to go potty before a storm hit, but he was seconds too late: lightning flashed, and Blake jumped the fence.

Austin, his roommate Nick Rowan, and other friends immediately put together a search party and organized a plan for finding Blake.

And that’s what impressed me the most. Would you know what to do if your pet was missing? Not everybody would, but Austin and his crew did everything exactly right.

Besides walking the neighborhood and talking to people on the streets, they called the company Pet Watch that has his microchip in their registry. They called the police, Metro Animal Services, the Kentucky Humane Society, and the rescue where Austin adopted Blake. They posted Blake on social media, and plastered the neighborhood with flyers.

It was a long night for these guys, but as Austin said,

“If you love your dog, you’ll do anything to find him. There is no in between with a pet: either you care or you don’t.”

Their work paid off: Nick got a call that Blake was on the back porch of a residential home about four miles away. They had seen his tag that listed his chip registry, and called the company. We rushed to get there, as the family was leery of letting Blake in their house, and if he got spooked, he could take off again.

Blake was indeed still there, and I’ve never seen such relieved faces as I saw on Austin and Nick. Blake was safe.

This incident with Blake struck me on a couple levels. One was the camaraderie and teamwork between Austin and his friends. As they worked together, I heard a lot of “Thanks, man” and “Love you, bro.” I was in awe of the friendship between these young men, and the support they showed in getting Blake back.

Nick explained it this way: “Blake may as well be my dog, too, I love him like he’s mine. How could I not? Just look at that face! Pets are family, it’s as simple as that.”

The other thing I wondered about was, would other people know what to do when a pet goes missing? If everyone worked as hard to find a lost pet, we wouldn’t have so many strays in shelters. So what advice does Austin have for others?

“First of all, stay calm,” he said. “I didn’t break down until later. Reach out for help: I couldn’t have found Blake without my friends’ help. We didn’t give up—that was the key. I love my dog too much to stop. Our quick reaction and the chip Blake has in him kept him from being lost for good.

“Why don’t more people try as hard as we did? Maybe they don’t care. Or maybe they’re too afraid or embarrassed to report their dog missing. Don’t be: this could happen to anyone—get help.”

Nick agreed. “When I got the call from Pet Watch, I was able to talk to the people who found Blake immediately. There’s no sitting on your hands in a situation like this. It may seem futile, but you can only lose if you don’t try.”

As for Blake, he was a bit traumatized for a few days afterward, and Austin carried him around a lot. But aside from a few scratches and a torn paw pad, he checked out fine.

Blake was lucky. He was found in just 12 hours. Too many dogs and cats aren’t found for days, weeks. Or at all. There are many animals in shelters picked up as strays that are obviously someone’s pet. Yet no one comes looking for them. If they’re lucky, they’re readopted. Others aren’t.