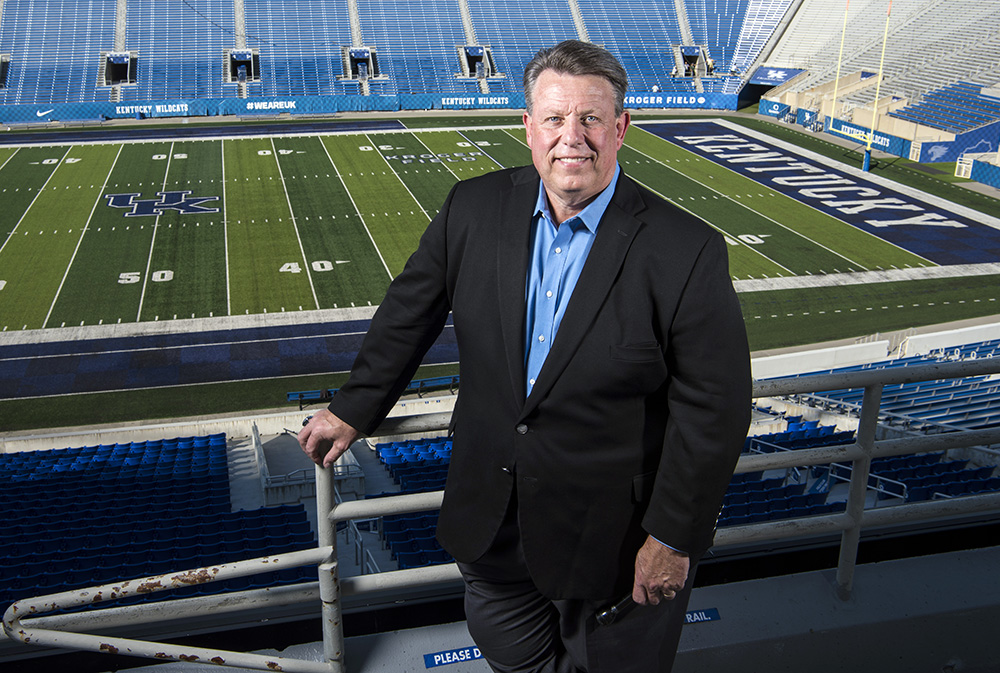 The year 1997 was a transitional time for UK football fans, and not only because of a coaching change.

Under coach Bill Curry, the Wildcats hadn’t seen a winning record—and had attended only one bowl game—in seven straight seasons. In December 1996, UK hired a new coach, Hal Mumme, to turn around the team. About the same time, Ralph Hacker, the play-by-play voice of the Wildcats, announced he was stepping down after five seasons. That’s when UK Radio Network’s Jim Host named a new sportscaster, 36-year-old Tom Leach, to replace Hacker.

During that first season, Leach often dropped in to watch Mumme and the team. During one of their practices, Mumme said something Leach has never forgotten.

“He told them that the Eagles play Hotel California thousands of times, just so it will sound good the one time you’ve paid your money to come and hear it. That’s the monotony of greatness.”

The phrase resonated with Leach. Broadcasting, like football or anything else that requires practice, is about repetition—going through the motions over and over, so when it’s time to go on air, the delivery is smooth, the facts are accurate and the broadcast is professional. Since he was 16 years old, Leach had been toiling in obscurity, paying his dues and dealing with a lot of monotony; now he was ready for a chance at greatness.

Leach’s story starts in the small tobacco farming community of Center Hill in Bourbon County. He learned the value of hard work from his father and mother, who raised tobacco and sold vegetables at the local farmers market to make ends meet.

“When you grow up on a tobacco farm, you work on Thanksgiving Day, you work on Christmas Day,” he says. From Alvin, his father, Leach also learned a love of sports.

Growing up before 24-hour sports networks and cable sports shows, Leach devoured the sports section of the newspaper and listened to as many games as he could on the radio.

When Commonwealth Stadium opened in 1973, Alvin bought season tickets for the football Wildcats. He and Leach travelled down Paris Pike to Lexington, got a bite to eat and sat in the stadium lot, listening on the car radio to an hour or so of pregame shows. When the game started, Leach would carry his transistor radio inside to listen to his idols call the game.

Here’s an audio file of Leach from 1977, his first time on the air:

“Around the eighth grade, I remember getting the play-by-play bug,” he says. “I was captivated by Cawood (Ledford) and Ralph at UK.”

At 16, Leach started working at WBGR, an AM station in Paris. “I loved going to work,” he says of the job he would have from his junior year in high school until he graduated from college. “I was really bad, but I was working for longtime radio guys who didn’t let me cut any corners.”

It was in these early days that Leach learned broadcasting greatness was made through preparation and the behind-the-scenes monotony. There was no such thing as digitally editing out a mistake with the quick swipe of a mouse. “In the ’70s, you were recording on what essentially looked like an eight-track tape,” he says. “If you made a mistake four minutes and 55 seconds into a five-minute newscast, you erased the tape and started all over. That kind of taught you to do it right the first time.”

When Leach graduated from Bourbon County High School in 1979, he planned to major in communications at the University of Kentucky. In a senior profile in the local newspaper, he told the reporter he wanted to be next Cawood Ledford. He wanted to be the Voice of the Kentucky Wildcats.

In 1983, Leach graduated from UK and began working for WMST in Mt. Sterling, announcing area high school football games. In the fall of 1984, he got a job reporting news for WVLK, and by 1989, Leach began working on the UK Radio Network doing postgame scoreboard shows. Then, in 1997, 18 years after he’d declared his dream, Leach made his break into the UK press box.

Just as things were changing for Leach, they were also changing for the Wildcats. In the first game of Leach’s UK broadcasting career, the Wildcats were pitted against cross-state rival Louisville. Leach was nervous: “I had a one-year contract, and I knew if I didn’t do well, I wouldn’t get my second contract. And if I did really poorly, I might not even make it to the second week.”

Despite his nerves, he survived, and having Leslie County native Tim Couch throw four touchdowns for a 38-24 win didn’t hurt. “Cawood had a line, ‘You sound better when they win,’ and I’ve come to appreciate that,” Leach says.

As the Hal Mumme Air Raid offense began to impact SEC scoreboards, Leach started to feel comfortable in his new role. He went to the practices, interviewed the coaching staff, studied game notes and listened to old tapes of his predecessors. But there was something missing. He needed a signature line.

“Jim suggested I try to come up with something for a touchdown call, and I thought about it. I just kept thinking about it, but nothing really sounded right. Everything sounded like I was planting it or scripting it,” he says.

“It started with just me saying ‘Touchdown, Kentucky!’ with a lot of enthusiasm. It’s pretty simple, but with Tim and Craig Yeast and those guys, it caught on because they were scoring a lot of them.”

In 2001, when Cawood Ledford, who had announced UK basketball for 39 years, retired, Leach became the announcer for the basketball Wildcats, too. “It was such an honor, knowing who had come before me and the standard Claude (Sullivan) and Ralph and Cawood set,” he says. “It was, and still is, such a great privilege.”

Now in his 21st season as UK football’s play-by-play announcer and his 16th season with UK basketball, Leach’s smooth, yet vibrant voice is synonymous with sports coverage in the Bluegrass. “Sometimes when the season’s not going well, someone will say to me, ‘I’ll bet you’ll be glad when this season is over.’ But I never am. Because I get to do this. I get to do what I love to do.”

If you’re a doctor or a teacher, you might be doing what you love five or six days a week, but play-by-play announcers do the work they love for about 13 football games (depending on a bowl game invitation) or 40-some basketball games (including a few exhibition and championship games) per season. “The hook for me was to do play-by-play for games, but that’s only 55 or 56 days a year out of 365 where I get to do what I love to do,” says University of Kentucky sportscaster Tom Leach. With so few games to call, Leach still has his favorites, or the most memorable on-air moments. Here are his top three:

When you work as the announcer for the Kentucky basketball program, you figure you’re going to work many Final Fours in your career, and you may get to call a couple of championship games. Leach has already realized that dream. “Cawood (Ledford) called a championship, Ralph (Hacker) had a couple, so it was nice to get in that club. Hopefully, there will be more, but you savor them because they’re hard to achieve,” Leach says.

On October 13, 2007, UK beat LSU, the No. 1 team in the country, in a triple-overtime stunner on a dramatic fourth-down stop. “Coach Brooks had been turning the program back around. He had a really good team and that was a magical night to watch the revival of Kentucky football culminate in a moment like that.” It was a memorable day for Kentucky football fans, and Leach’s second all-time favorite on-air moment of his career.

It was Leach’s first game on-air as the Voice of the Wildcats. “It was the opening game of the Hal Mumme era, and it was the year of the air raid,” he says. “There were a lot of fun moments that football season and it coincided with my first season.” The Wildcats went on to beat the Cardinals 38-24 for the program’s 500th victory, an auspicious day for a young sportscaster’s debut.