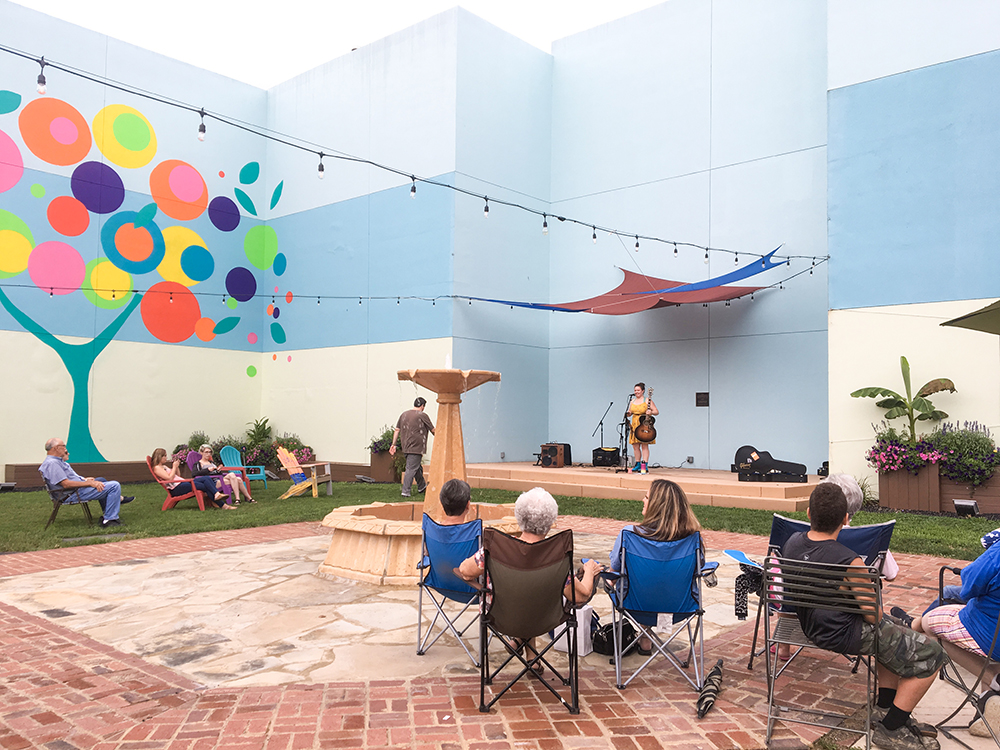 Mt. Sterling local artists designed a large mural, and a local store, A Plus Interior and Exterior Painting, donated time and materials to transform drab exteriors of neighboring buildings into an eye-popping and fun event space. Photo: Tracy Pearce

When the 200,000 visitors converge on the annual Mt. Sterling October Court Days (October 12-15), they will see a major improvement to the city’s downtown. A once-neglected park is now a social hub for the revitalized community about 25 miles east of Lexington.

The 15-month project to rejuvenate Mt. Sterling is the winner of the Governor’s Award in the second annual Beautify the Bluegrass initiative, a partnership of Governor Matt Bevin and Kentucky Living to encourage Kentuckians to work together to repair, enhance or beautify an area in their community.

From 23 submissions, the governor selected three winners from finalists voted by Kentucky Living readers. Winners were announced on August 23 at Kentucky Living’s Best in Kentucky awards at the Kentucky State Fair.

“I’m really excited to see how this project has begun to grow in popularity and participation,” Bevin says. “I want to give a personal thanks to the Kentucky Association of Electric Cooperatives and their publication, Kentucky Living magazine, that has adopted this.”

Mt. Sterling’s project wins them a barbecue for 200 with Governor Bevin and Lt. Governor Jenean Hampton.

When Dr. Danielle King moved to Mt. Sterling in 2002 to join a private medical practice, she loved the city’s historic buildings and charm, and quickly began caring for the community and its people.

Yet, the physician also made an important diagnosis.

“Our downtown was sort of dried up,” she recalls.

In 2010, King purchased a charming old jewelry store that had closed in 1997 and was dilapidated. With the help of her father and friends, she renovated the building, and then partnered with a good friend to open a bakery there one day a week on King’s day off from the health clinic.

“We baked Wednesday night and opened Thursday mornings and would sell out,” King says. It was enough to break even.

“I realized more that the downtown could only survive if we tried to make it user-friendly and get more pedestrian traffic,” King says. “A few businesses started popping up once we opened the bakery.”

A downtown business group, dormant for 10 years, began to meet again and King was elected to the city council.

In what King describes as a “total inclusive community effort,” volunteers partnered with city government, city workers, the local chamber of commerce and businesses to design and execute the transformation of the downtown park.

Dedicated in April, the park is now a popular lunch hangout and hosts concerts and other events.

“It’s helped the local economy and businesses because it’s given people a place to be,” King says, “It’s made a tremendous difference.”

At the end of a residential street near one of London’s main cemeteries sits another small graveyard. Until recently, the plots were overgrown and some headstones overturned. The African Americans buried there were largely forgotten.

Governor Bevin selected the project as the recipient of the Beautify the Bluegrass Commonwealth’s Award.

“We enjoyed working together as a team toward the common goal of cleaning the area, learning about the soldiers buried there, and honoring them for their service so long ago,” says Brittany Riley, who chairs the design committee of the London Downtown Board.

The director at Blue Licks Battlefield State Resort Park near Mt. Olivet feared he would have to close the park’s four playgrounds because of a lack of mulch and the funds to buy more. The Beautify the Bluegrass team from Fleming-Mason Energy Cooperative not only replenished the mulch, but also repaired the playground equipment. With the help of employees, co-op directors, families and friends, the team revived the pollinator garden with plantings and installed benches for visitors to enjoy.

“One of the core cooperative principles is commitment to community,” says Fleming-Mason’s Lori Ulrich, director of Community & Economic Development. “This project gave us a chance to work together as a team to help with a need in our community.”

See the other entries from 2018’s contest.