Here are the other great projects that were entered in the 2018 Beautify the Bluegrass contest.

Big Sandy Rural Electric Cooperative employees chose to landscape the entrance to our local state park. “We chose this project in hopes of catching the eye of folks who would otherwise pass by this gem we have hidden in the hills of Eastern Kentucky. We feel very fortunate to have such a beautify state park in our community and we want to highlight this part of it,” said Natasha Wiley, Manager, Big Sandy RECC. 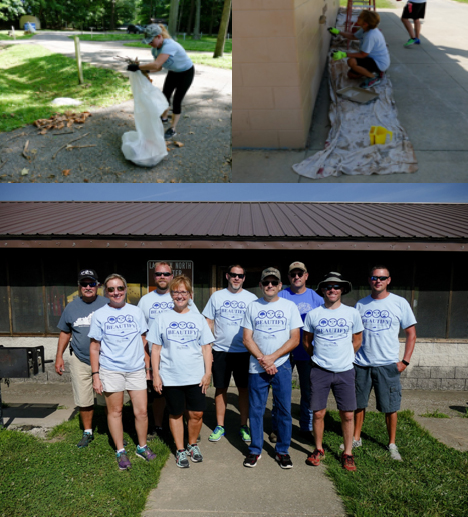 Employees of Big Rivers Electric Corporation divided their time between two projects in June. Since the company covers a 22-county service territory, one park in Henderson and one park in Owensboro were selected for clean up efforts. A team of employees spent a full day at Audubon State Park in Henderson picking up trash and clearing weeds from the campground and other park property. Another employee team dedicated a full day to spreading mulch and painting the ball field facilities at Panther Creek Park in Owensboro. 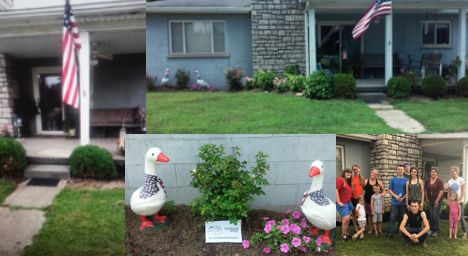 In Boone County, enthusiasm for the Beautify Belleview project has spread like wildfire. It was started by the Belleview Baptist Youth Group. The goal was to use community projects to teach youth about honoring God, by serving others and growing pride in the community. We started landscaping at the Belleview Cemetery, where most of us have relatives buried. Next, we picked up litter along the road, for Trash for Cash. Word traveled fast that landscaping items were needed. Donations came from as far as Piner. Neighbors divided their plants for us and a mystery donor left mulch. We fixed up landscaping for Kelly Elementary, our church and some senior neighbors. The community 4th of July parade route showcased many of these areas. When rain canceled a project, a long-lost relative arrived to mulch in the rain. We gave extra plants to neighbors to beautify their homes. We had all ages working together to make our town a beautiful place. 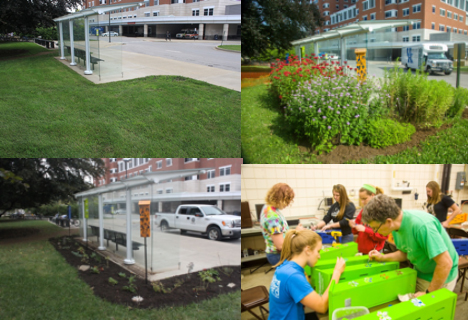 Pollinator gardens are designed to attract and support bees, butterflies, etc. Such gardens contain nectar plants which provide food and host plants on which pollinators lay their eggs. Not only are these pollinators beautiful, but they also provide important ecosystem services. Pollinators are responsible for supporting over 1/3 of the food we eat. Recently, the University of Kentucky welcomed to its campus six new pollinator gardens totaling over 3,000 sq. ft. Under the guidance of Dr. Carmen Agouridis, students designed the gardens, procured materials and supplies, assisted with the construction process, and installed the native plants. The pollinator gardens are located across campus at in the Barnhart building courtyard, the Lextran bus stop at Agricultural Science Center North, T.P. Cooper building, near the Women’s Cancer Center, near the Slone Research building, and along Erikson Hall. Student organizations have adopted the gardens. Learn more at https://bit.ly/2mlDgvZ.

Clark Energy and East Kentucky Power Cooperative (EKPC) weeded, planted flowers and spread 36 bags of mulch at the Welcome to Winchester sign on KY 627 as part of Gov. Matt Bevin’s Beautify the Bluegrass campaign. Working on the weekends, co-op staff and family pulled weeds, purchased the mulch at Lowe’s and then made repeated trips to spread it. Co-op representatives planted begonias and coleus flowers. City officials thanked the co-ops on social media for enhancing the south entrance to town. Both Mayor Burtner and City Commissioner Kitty Strode came to the sign to be photographed with staff from Clark Energy and EKPC. One city commissioner wrote the following on Facebook: “Thank you. That welcome sign is perfect.” Photo caption: Representing Clark Energy from left are Patty Young, Lois Hatton and Charlie Pasley. Next is Winchester Mayor Ed Burtner and City Commissioner Kitty Strode, followed by Kevin Osbourn and Joe Settles from EKPC.

Together with the Hopkinsville Beautification Commission, Town and Country Garden Club, and the Public Works Dept., they transformed an empty spot in the Ft. Campbell Memorial Park into an area that can be enjoyed by everyone. They will continue working on this park into the fall, with many new beds.

Jackson Energy partnered with the Four Seasons Garden Club of Irvine, Kentucky to rejuvenate their Monarch Waystation located at the West Irvine Intermediate School.  This waystation was originally created to provide a unique habitat specially designed for the monarch butterfly.  Although the waystation provides food and rest for all life-stages of these magnificent creatures, this waystation also serves as an outdoor classroom for the students at West Irvine Intermediate.  The students get to see firsthand not only the importance of the garden itself but the precious life cycles that unfold before their eyes.  This waystation is also accessible to the Irvine community to appreciate, observe and enjoy. 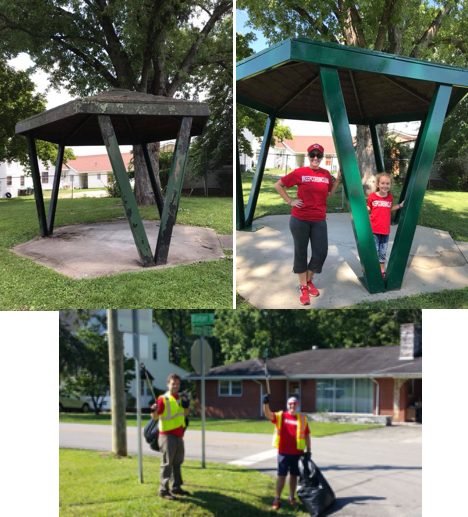 “When Gov. Bevin announced this contest in 2017, it became a catalyst to tackle a pervasive, and unsightly, problem with roadside litter in Corbin. It was rampant! We created the #KeepCorbinClean campaign as a response to this issue. It’s made a huge difference, Trent Knuckles, of the News Journal and a City Commissioner for the City of Corbin.

For the second straight year, we hit the streets for a month doing cleanups along our roadways and other public spaces. We photograph these cleanups and post them to social media with the #KeepCorbinClean hashtag to document our activity, and encourage others to participate. It’s really caught on! This year, we added a community clean-up day on July 21 and has dozens of volunteers. One local family even renovated a neglected park near one of our schools. I’ve included many photos of our efforts. Thank you!

Together with the Hopkinsville Beautification Commission, Town and Country Garden Club, and  the Public Works Dept., we transformed an empty spot in the Ft. Campbell Memorial Park into an area that can be enjoyed by everyone. We will continue working on this park into the fall, with many new beds.” 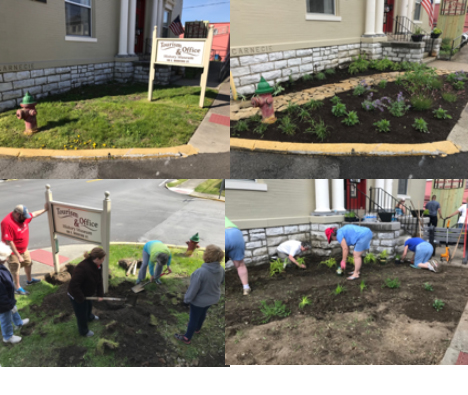 The Lawrenceburg/Anderson County tourism office moved into the Anderson County History Museum in December 2017, reopening a building that had been closed for 2 years. The 110-year-old former Carnegie Library’s landscaping was in sad shape, but members of Lawrenceburg’s America in Bloom group decided to tackle it as a project for 2018. The building is located along East Woodford Street, a main route for Bourbon Trail travelers as they head to and from the nearby Wild Turkey distillery, so beautifying this location was important. Up to 15 volunteers stripped out grass, weeds, rocks, bricks, and concrete, replacing that with plants that will flower throughout the growing season, an “S” shaped stone path which is a nod to the “S” shaped bridge just down the road over the Kentucky River (one of only a few such bridges in the world). Flowering plants were placed inside an old burgoo pot and firewood was placed underneath, a nod to the county’s annual burgoo festival. 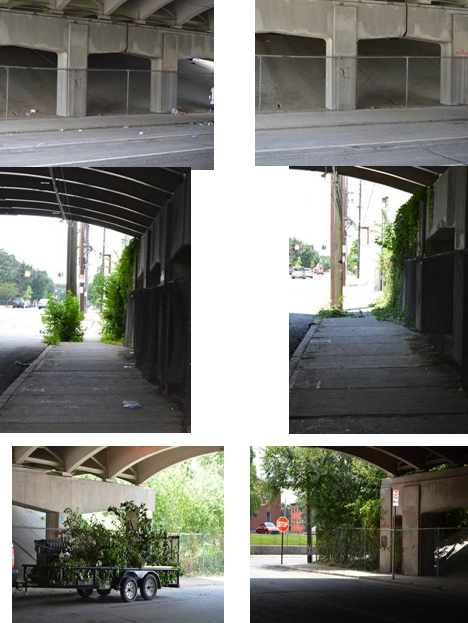 The project consisted of cleaning up garbage and sweeping debris from under I65 at College, Jacob, and Breckenridge Streets.  A large amount of garbage was removed.  The crews also cut back brush that had grown over the sidewalk and carried it off.

The Management Team at the Louisville Convention & Visitors Bureau assisted in a clean-up project at thespent Southwick Community Center and Russell Lee Park in Louisville through Mayor Fischer’s Give-a-Day program.  The team spent a half day planting trees in the park to help beautify the area.

“We quickly developed a plan to level out ten different areas and prepare a surface for concrete pavers. After the prep work was done, with assistance from the Christian County Jail, Pennyrile Electric employees began leveling each area and laying the pavers in place,” said Brent Gilkey, of Pennyrile. “In addition to the pavers, we planted some flowers in large pots and placed them at various locations around the tables. This project came together with the assistance of several local businesses. Lowes of Hopkinsville provided material at a discounted rate. The Christian County Jail crew came out and provided equipment and labor to level the selected areas and prepare them for the pavers. The rock and sand were donated by Rogers Group and hauled to the location by Tom Gamble Trucking free of charge. We would like to thank everyone who played a part in making this project a success and putting forth an effort to beautify the place we call home.” 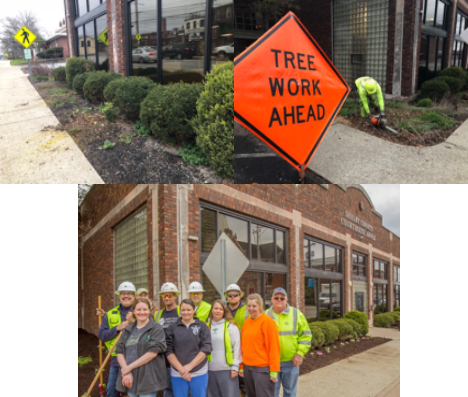 Shelby Energy improved the appearance of the Shelby County Annex Building by removing old trees and shrubs, trimmed and weeded, and planted flowers and put down new mulch. 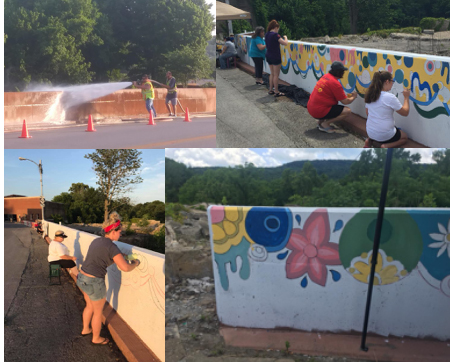 In 2017, the South Central Arts Council requested the Monticello City Council to allow the group to work on a mural of some sort to be completed on an eyesore downtown- a retaining wall put up by the state on Main Street across from City Hall and the new Farmer’s Market.  The council agreed to support the arts council and work was scheduled for Spring of 2018.  The arts council began work on the project in June along with help from the volunteer fire department pressure washing the retaining wall and priming it for paint. The council led a community event on June 23, 2018, “Color Downtown” and invited everyone in the community to come and help ‘color’ the wall. The event was a success and citizens from the community have shown up at various times over the summer to help on the project. Completion is expected before school starts this year.  The wall will feature various tourist attractions relative to Monticello including Mills Springs and the Wayne County Museum. 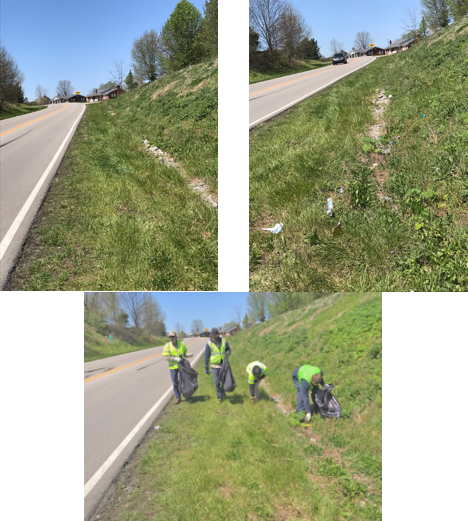 South KY RECC had 45 of its Somerset employees participate in the local, recent PRIDE cleanup day in Pulaski Co. Employees picked up trash on Parkers Mill Rd, Electric Ave, Weddle Ln, Regency Rd, and Enterprise Dr. It is something that we try to participate in every year – helping to beautify our community.

West Kentucky Rural Electric Cooperative decided to beautify the entrance to one of Western Kentucky’s most important tourism venues, Kenlake State Park. The park is located in Marshall County, on the shores of Kentucky Lake and near the Land Between the Lakes, a national recreation area.

The project was selected and coordinated by WKRECC’s Community Engagement Committee. The project team was compiled of employees, managers and board members, all of whom lent a particular expertise. The team also worked closely with Kenlake Park management to ensure the work met all necessary requirements. 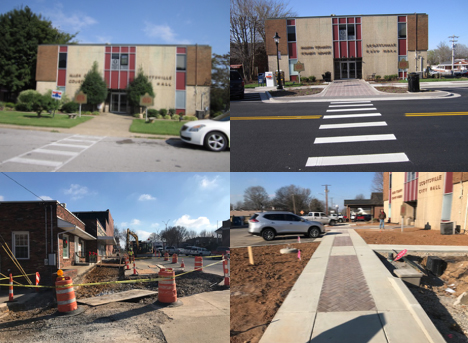 West Main Streetscape project was a complete overhaul of the infrastructure of West Main Street in Scottsville, Kentucky.  New sidewalks with pavers were installed and included a sidewalk reconstruction that aligned all of West Main walkways; parallel parking spaces were modified to diagonal spaces for additional parking spaces. An additional handicap space was added for van parking;  Improved illumination and more cost efficient street lamps replaced  existing lamps.  Upgraded and added additional electrical outlets for our vendors during festivals. All new landscaping, park benches and trash receptacles were added also. Improved and made more visible the two main crosswalks on West Main Street. 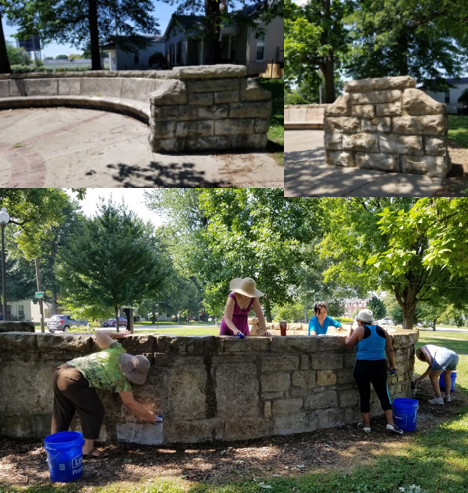 In 1897, world-renowned sculptor, Enid Yandell executed the Wheelman’s Memorial Bench at Wayside Park in Louisville.  In order to celebrate Miss Yandell’s 150th birthday in 2019,  a group of women from the Iroquois Neighborhood Association decided to give the bench and the park a good cleaning.

On June 3, 2018, volunteers sprayed the bench with D2, a biological cleaner, in order to begin eating away at the years of growth of mold, lichens and pollution.  On July 14, 2018, a group of volunteers returned to the bench to spray it down again and give it a good scrubbing.

The results created a new source of pride in the neighborhood.  Additionally, the volunteer’s efforts restored an amazing piece of public art/women’s history for years to come.