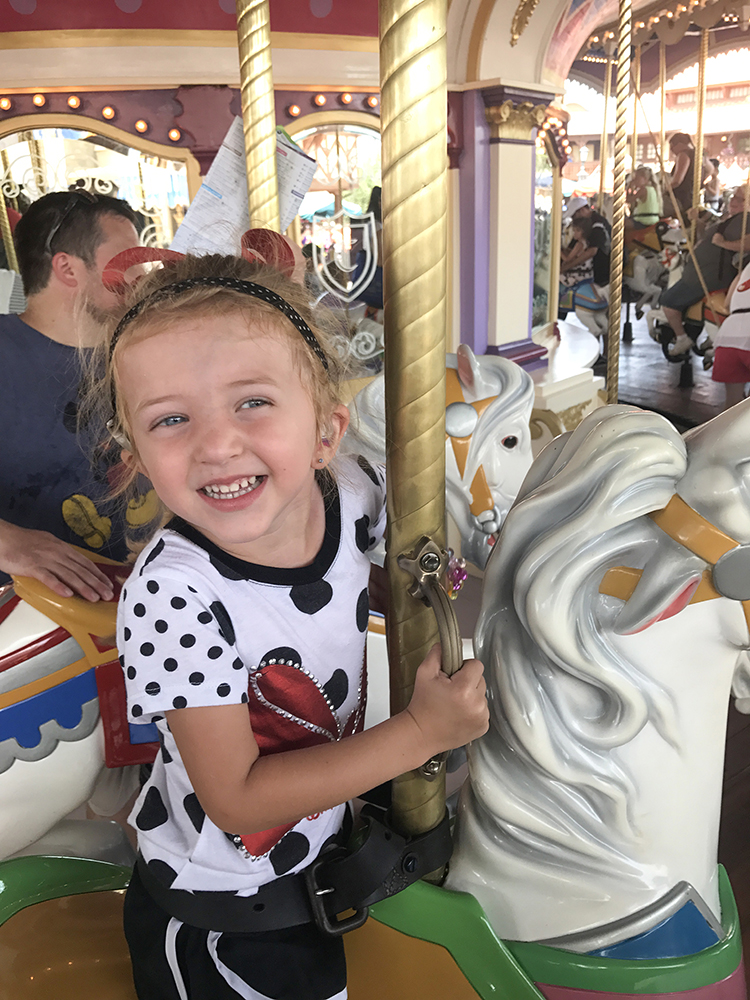 Shiloh Lusk is a lively 4-year-old who plays T-ball, is a cheerleader at her school and loves watching her sister Gracie play softball—she also has cochlear implants so she can hear. The devices have made a huge difference for Shiloh. Photo: Lusk family

When Shiloh Lusk was born, her doctors were worried about a heart condition and kept her in neonatal intensive care for five weeks. During these five weeks, they discovered that Shiloh’s heart was healing fine, but she couldn’t hear.

“They did the newborn hearing screen in the NICU, so they were able to diagnose that she has hearing loss. We didn’t know to what extent,” says Shiloh’s mother, Jennifer Lusk. “Just before she turned a year old they did, where they sedate her, a test called an ABR. That’s where they diagnosed that she definitely had hearing loss. By the time she was 1, she had her first hearing aids.”

The Auditory Brainstem Response test uses electrodes to test brain waves in response to sound. This test is particularly useful with patients who are young or

This test enabled Jennifer and her husband, David, and Shiloh’s older sister Gracie, who live in Fulton and are members of Gibson EMC, to understand the extent of Shiloh’s hearing loss, and paved the way for getting her first set of standard amplification hearing aids.

“They did good, because her speech was developing and everything,” says Jennifer. “It’s just that they knew that she had severe hearing loss and eventually the hearing aids were only going to do so much.”

As Shiloh reached a zenith with her standard hearing aids, she was tested as a candidate for cochlear implants.

A cochlear implant is “a device that provides direct electrical stimulation to the auditory (hearing) nerve in the inner ear,” according to the American Speech-Language-Hearing Association.

Standard hearing aids amplify sound. The cochlear implant bypasses the damaged parts of the ear that keep sound from reaching the auditory nerve, and directly stimulates that nerve, taking over the function of the damaged structures. A cochlear implant has external and internal parts, the latter surgically implanted several weeks prior to the patient being fitted with the external portion.

The federal Food and Drug Administration establishes criteria for cochlear implant eligibility, both for children and adults, says Cheryl Donaldson, a speech-language pathologist with Heuser Hearing Institute in Louisville. “Adults are a little bit different, but children have to have a severe to profound lateral sensor neural hearing loss. They have to be at the bottom of the audiogram,” she explains.

“Within the first 10 minutes, he had already done a test with her speech that he could tell she was a candidate,” says Jennifer. “We met with the speech pathologist and we met with the audiologist, and ear, nose and throat doctor.”

Then the family had to get approval from their insurance company. Once that was secured, Shiloh’s surgery was the next step in the cochlear implant process.

“It was nerve-wracking, because they go in behind her ear and make an incision then make a hole in that bone behind her ear,” Jennifer says. “They monitor the facial nerve while they’re doing the surgery because they get so close to it. If they get too close to this nerve they can have paralysis and it can affect their sense of taste.”

Shiloh has had two cochlear implant surgeries at the Monroe Carell Jr. Children’s Hospital at Vanderbilt in Nashville, completing the latest in late November last year.

“She’ll go back every three months for programming with the new implant,” says Jennifer. “They require her to have speech therapy.”

“It is a process,” Donaldson says. “The child doesn’t come in for their activation, get it turned on and immediately understand what they’re hearing and start to talk. The brain has to learn to interpret the sound, attach meaning to the sound, just as infants do when they are beginning to learn spoken language.”

The cochlear implants have allowed Shiloh to progress, her mother says: “She’s just a normal 4-year-old. She’s going to preschool. She’s doing the little cheerleader program at school and we travel with her older sister, who is 16, for softball.”