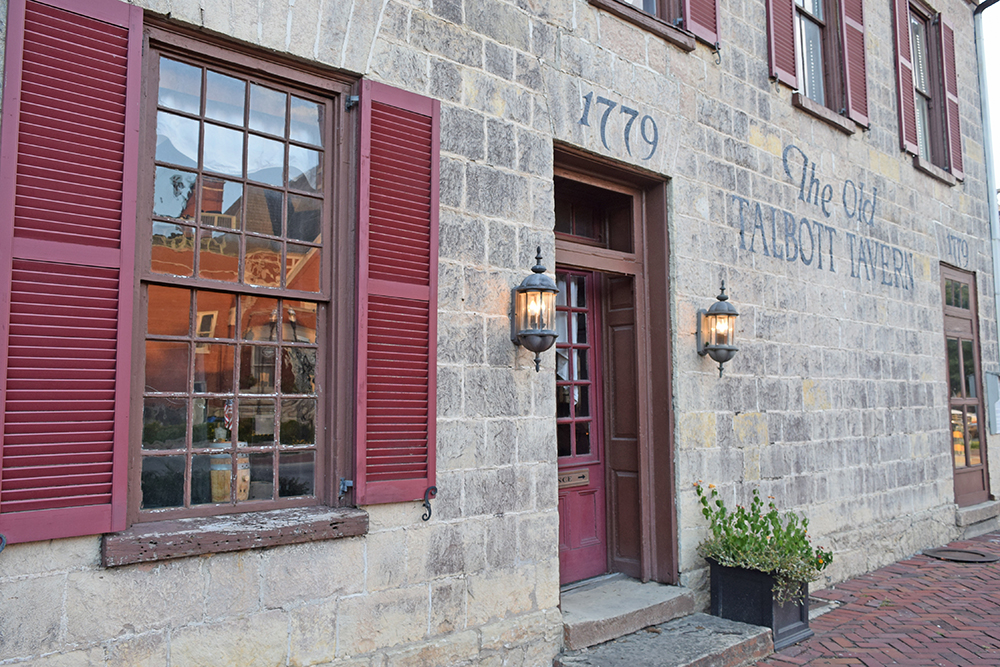 The Lincoln family stayed at The Old Talbott Tavern when Abe was young while their land dispute case was tried in the local courthouse. Photo: Jane Simon Ammeson

Along the byways and backroads of Kentucky, interactive culinary history takes us to places where Abraham Lincoln dined—a food journey celebrating Kentucky’s dedication to both good food and preservation. Call it a way to indulge in sumptuous cooking without guilt—after all, it’s all about connecting to history, isn’t it?

A land dispute brought Thomas Lincoln and his family to Bardstown, where they stayed at the Old Talbott Tavern just across the street from the courthouse while their case was being tried.

“Abraham Lincoln was about 5 years old when he stayed here,” says Deanna Kelley, whose husband’s family has owned the inn for decades. “It’s kind of crazy to think that he used to be here, in this very building.”

The tavern first opened in 1779. At that time, many taverns and inns lined the rudimentary roads crisscrossing America. They offered the perfect trifecta for travelers—beds, edibles and strong spirits.

But very few now remain. Old Talbott Tavern is considered one of the oldest, continuously operating taverns in the U.S. and the oldest stagecoach stop west of the Allegheny Mountains. Described as a rare example of Flemish bond stonework, the tavern has an old English feel, with its thick walls, deeply inset windows, original timbered ceiling and the wide doorways.

“The doors are wide like that because women had to get through them with their hoop skirts,” says Kelley.

Women in wide skirts (always a fire hazard) also cooked over the two large fireplaces that flank the sides of the door leading into a second dining area.

“They would have served a lot of game back then,” says Kelley. “It would be what might have been shot that day. We don’t have game on the menu anymore; it’s gotten too hard to get.”

In other words, don’t expect to find a menu of fried squirrel, partridge, venison or raccoon, which Lincoln was said to favor. But if you want to dine like Abe, the tavern cooks several dishes (in the kitchen now, not over an open fire) that qualify. These include Kentucky burgoo—a thick stew of vegetables and meats—biscuits, grits and slow-cooked pot roast.

Chicken was fried back then in large cast iron skillets and Kelley says they still fry their chicken the same way—though not in the same skillets.

Lincoln would have been too young to partake of Bardstown’s rich bourbon history, but surely his father Thomas bellied up to the bar, particularly given that he was losing his farm.

A stagecoach stop on the Midland Trail

While Lincoln’s stay at the Talbott Tavern is well-documented, it is logic and oral history that put him at the Old Stone Inn in Simpsonville when he was a successful attorney and statesman.

Lincoln’s paternal grandparents, his father and two uncles lived not far away, and his grandfather (another Abraham), who was killed in an ambush while planting corn, is buried a few miles away—another reason why Lincoln might have visited.

Built in the early 1800s, the inn, with its 2-foot thick stone walls, numerous fireplaces and wood floors, was a stagecoach stop, tavern and inn along the Midland Trail, or U.S. 60. Besides Lincoln, other famous personages who stayed there include Andrew Jackson, who traveled the trail as he made his way between Tennessee and Washington, D.C.

As for the foods Lincoln might have dined on, Kayrouz says menu offerings would have included locally grown seasonal produce (the original farm to fork), which after December would be a tedious assortment of root vegetables, pork and, of course, fried chicken. In the 1830s, there was a separate entrance to the tavern that was probably for gents only—a place where they could do manly things like sip bourbon, spit and smoke. Times change and now both sexes can order a bourbon at the inn, but there’s no longer either spitting or smoking.

Abraham Lincoln had campaigned in southwestern Indiana, where he had lived as a youngster before moving to Illinois. He returned only once, in 1844 when he campaigned for Henry Clay, who was running for the presidency. But Lincoln’s support of Clay is said to have waned after he met the great statesman following a speech he gave in Lexington in 1847.

Clay lived at Ashland, a grand estate now located in a historic neighborhood in Lexington and open to visitors as a house museum. There’s an ongoing two-century-long debate among historians about whether Lincoln ever dined at Ashland. Mary most likely did, as the families were friends.

We weren’t there, but we’re going with the researchers who believe Lincoln ate there, too.

According to Ashland curator Eric Brooks, the Clays raised pigs and his wife, Lucretia, was known for her hams that she sold at Lexington’s downtown market, which still exists. Though you can no longer taste her hams, Ashland’s brick smokehouse has been converted into the charming Ginkgo Tree Café.

“It’s about keeping Kentucky recipes alive,” says Sundral Sizemore, who creates such traditional dishes as sweet potato biscuits, chicken and dumplings, and olive nut sandwiches (using only Duke Mayonnaise, please) at her café. “I grew up eating this type of food. We ate biscuits with almost every meal, and I added sweet potatoes, which is a very Kentucky type of food, to them. It’s classic, but at times taking it in a slightly different direction. People love coming here, sitting outside on the patio overlooking the grounds and enjoying the classic foods.”

A haven for the heartbroken

Lincoln did dine at Farmington, the Federal-style home of John and Lucy Speed built in 1816 based on plans most likely designed by Thomas Jefferson. The Speeds owned a 550-acre hemp farm near Louisville and when John Speed passed away, his son Joshua returned home from Springfield, Illinois, where he counted Lincoln among his best friends.

“When Mary and Abe broke off their engagement, Lincoln was really morose,” says Terry Pyles, a docent at the Farmington who has a passion for culinary history as well as architectural preservation and decorative arts. “Joshua invited Lincoln to stay here.”

It was an invitation that some credit with saving Lincoln’s life.

Speed was at the wharf to meet Lincoln when he arrived by steamboat and for almost the entire month of August 1841, the Illinois lawyer stayed with the family.

The foods he ate when living with the family are reflected in the Speed Family Heritage Recipes: Commemorating the 200th Anniversary of Farmington Historic Plantation, edited by Susan E. Lindsey. Though the mansion is now a house museum, culinary events often are held there, including annual events like Harvest Festival, Derby Day Breakfast, Oktoberfest and, just recently, an heirloom dinner that served foods from the cookbook.