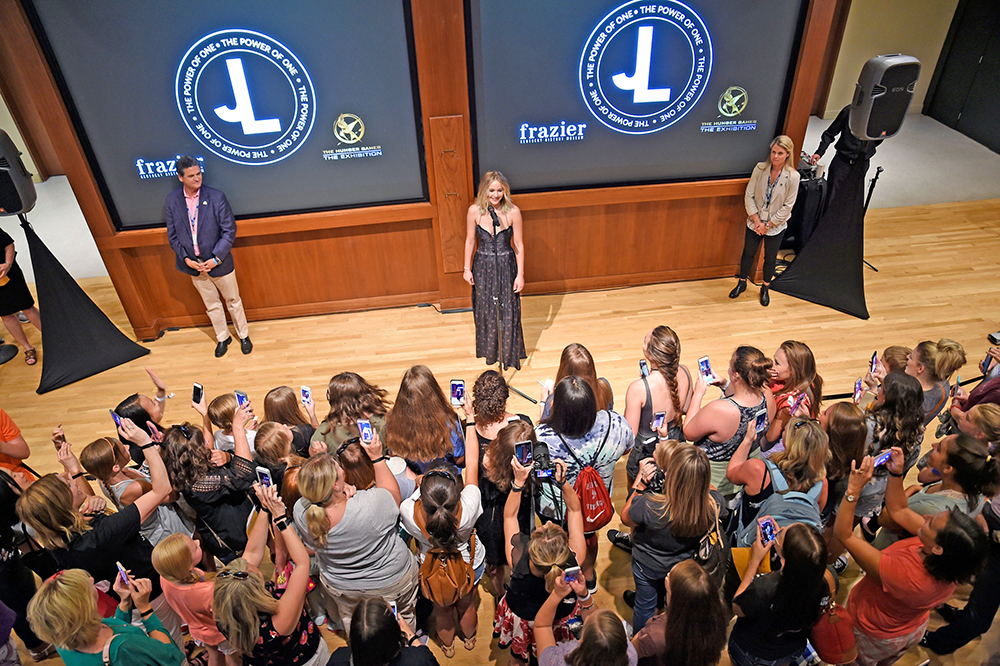 In 2014, with The Hunger Games franchise catching fire around the world, Lawrence started a foundation, in part, to give other young people the same opportunities that she had growing up.

“It’s so exciting to be able to help,” explains Lawrence during the foundation’s Power of One fundraising event at Louisville’s Frazier History Museum in July 2017.

Lawrence enjoyed a healthy, happy childhood where she was encouraged to explore that brilliant, sometimes awkward angst that framed her a little differently than the other tweens in class. The opportunity the arts gave her to celebrate her form of expression is not one she takes lightly.

“I wouldn’t have a job if it wasn’t for the arts,” Lawrence says. “I think creativity is a tool that can be learned and harnessed at such a young age that we need to support and explore every aspect of how someone can be useful.”

The foundation is managed by Lawrence’s sister-in-law, Meredith, who serves as its executive director, with support and guidance from Jennifer’s mom.

“It’s an honor; I have the greatest sister-in-law in the entire world who’s been working so hard and running my foundation,” Jennifer says. “And my mother has been so supportive and really successful.”

Her mom Karen says, “It’s an opportunity to help those without a voice … those who need a hand. Jen’s celebrity gives us a great platform, and we are the hands that work on behalf of the foundation to help make dreams come true or to make life a little better.”

The mission of the Jennifer Lawrence Foundation is to positively impact the lives of young people and the organizations that serve them. It hasn’t taken long for its impact to take hold. The Boys and Girls Club, Uspiritus and Fund for the Arts are just a few of the organizations the foundation has supported through its parent organization, the Community Foundation of Louisville.

If you’ve ever seen Lawrence on The Tonight Show, The Late Show or Saturday Night Live, then you’re already familiar with her casual, vibrant and occasionally self-deprecating sense of humor. That’s not an act: it’s just Jennifer being Jennifer. Authenticity isn’t something you see too often from the actresses gracing covers of Vogue, Glamour, Cosmopolitan and Vanity Fair, but that’s what you get from Lawrence.

In addition to her comedic timing, the Academy Award winner also has an uncanny ability to portray great suffering and pain, but human suffering is not something she stomachs well in real life—especially when it’s children who are suffering.

“I mean, once you’ve seen parents that are helpless as to how they help their child, and you’ve seen children in pain that you can’t even imagine … it doesn’t matter how many times you see it; it’s hard,” says Lawrence. “That’s why I am so blessed to be able to have the job I do. If you can make any kind of impact on somebody’s day, just by signing a poster, or just by saying hi … I’m just so lucky to be able to do that.”

The organizations Lawrence supports feel pretty lucky, too. The Make-A-Wish-Foundation, West End School and Norton Children’s Hospital are other organizations that are receiving funding from the Jennifer Lawrence Foundation.

In 2016, the Jennifer Lawrence Foundation donated $2 million to create the Jennifer Lawrence Cardiac Intensive Care Unit within Norton Children’s Hospital in Louisville. The 17-bed unit, which will include three neonatal rooms, will offer space for families to stay with their children. It will be staffed by additional specialists with cardiac critical care training and experience, dedicated nursing staff and other professionals focused solely on heart care.

“This donation from the Jennifer Lawrence Foundation will play a significant role in helping thousands of local children receive the specialized heart care they need,” says Lynnie Meyer, chief development officer at Norton Healthcare. “We’re incredibly grateful for the support, and we look forward to opening the Jennifer Lawrence Cardiac Intensive Care Unit in 2019.”

West End School Director of Development Christa Rounsavall says they called on the foundation early in the 2017-18 academic year when the boys boarding school had an urgent and immediate need for an industrial dishwasher. The foundation came through then, as it had done earlier.

“Back in 2014, they sponsored an American Hustle benefit screening designating West End School as the sole beneficiary, which was amazing,” says Rounsavall. “All of those funds were unrestricted, so we were able to use them for general operating, which are the hardest funds to come by as a nonprofit and the most important since they support the programs that directly serve our boys.”

WATCH THE VIDEO Jennifer Lawrence talks about using her celebrity status to help children in Kentucky.

Watching young people react to Lawrence and seeing the way she genuinely engages in those encounters brings a very clear understanding of why children are the focus of the Jennifer Lawrence Foundation.

Lawrence says, “I believe that everybody deserves a chance, especially children, because they are the greatest hope we have for our future.”

It’s a hope the foundation is invested in through talent, time and, of course, dollars that Jennifer, Meredith and Karen raise through events like the Frazier’s Power of One Gala and Pajama Party last summer.

Getting back to her home state of Kentucky has a calming, grounding effect on the actress, but it’s her giving back that brings comfort to folks back home.