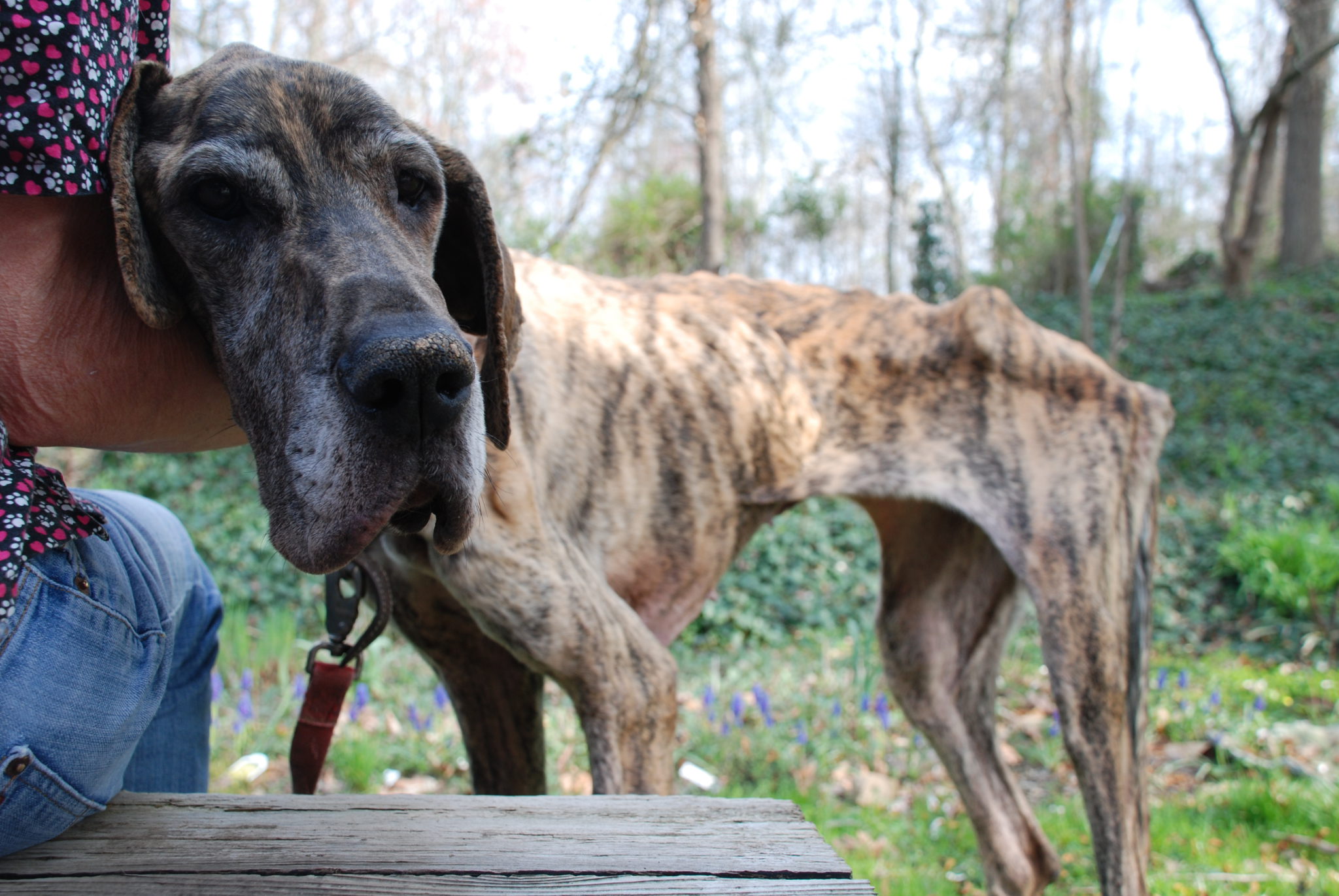 Every day, it seems, we hear of a dog that’s been lost, abused, or is in need of a new home. Pleas are sent out telling the stories of these dogs, begging for help. But unless they happen to be pit bulls formerly owned by Michael Vick, we never know what ultimately happened to these dogs.

During the past year in Kentucky, there were many dogs with particularly touching stories. If you’re even casually involved in dog rescue, you’ll remember these dogs. Here’s what happened to them:

Last winter, a witness saw a puppy thrown from a car onto a Louisville street. The witness called the Kentucky Humane Society, who sent out a rescue officer. The young boxer had a head injury from the fall, she was malnourished, and had a bad case of mange. The puppy was named Penelope, and the staff at KHS immediately began treating her.

It took several months of foster care, but as the before-and-after pictures show, Penelope became a brand new dog. She was put up for adoption, and found a loving home. One of the more horrific stories of the past year involved a Border collie mix named Sadie. She was found on a wet winter day frozen to a picnic table in Owingsville. She was nearly dead when found, and was taken in by the Bath County Humane Society. After her story aired on the local news, calls came flooding in offering to adopt her. But Sadie required a lot of care before that could happen. Probably abused by her former owner, she did nothing but lie still on the floor the first two weeks. A broken tail kept her from wagging for a month.

But Sadie did recover, and was placed with a rescue in Winnipeg, Canada. Renamed Tusani, which means “beautiful,” the call went out again to get her to her new home. Volunteer drivers signed up for the two-day drive, and Tusani is now busy playing with her very own little boy. The long-haired terrier that came in wet and matted was turned in to a southern Kentucky shelter when his owner could no longer afford to care for him. Owner turn-ins are usually the first to be euthanized when a shelter is full, so if they are adoptable, they often get priority by rescuers.

But the day the notice went out to Kentucky rescues, the dog was euthanized, stunning those trying to help him. As a rescuer noted in a later e-mail, “This guy was young, healthy, and very adoptable. Little did I know that the day I sent the e-mail post on him was his last day. I thought to myself that this boy would find a home in no time.”

When the dog died, another rescuer said, “He had feelings. Look at those eyes. He was scared. I could see it and I could feel it.”

The lesson learned in this dog’s case was that rescuers need to respond as quickly as possible to situations like this. Mostly, it was just bad luck that the dog was euthanized so soon, but many rescue shelters had offered to take this dog in. But they responded too late. Those who work at shelters and humane societies see more sad situations than anyone deserves. Such was the case of a 10-year-old collie mix. This senior dog was brought to a shelter in Columbia by his owner; he wagged his tail as the owner turned him over, not knowing that senior turn-ins have little chance of being adopted. The owner turned him in because he felt the dog was “too old.” The owner then adopted a puppy and took it home.

E-mails were immediately sent to everyone involved in Kentucky rescue, as well as other states, pleading for this dog. A “pull fee” of only $5 was offered to no-kill shelters to take this dog in. The dog was in danger of being euthanized at any time, so people were asked to call the shelter directly to put a hold on the dog.

And it worked. A shelter in Connecticut offered to take him, and the dog joined a caravan of other rescued dogs going to that state. The story hasn’t ended yet for the Great Dane found starving in Knox County. Described as a “dead dog walking,” the dog was supposedly being cared for by the owner’s aunt. Obviously, she was not.

The dog was taken by Knox County Animal Control, who deemed the dog was only half the weight she should have been; the dog could barely stand when she was rescued. Animal control officers said it would have taken months for the dog to have lost so much weight.

It was decided the kindest thing to do for the dog, whose name was Princess, was to euthanize her. But when the time came, they couldn’t do it. Shelter employee Amy Young said in a newspaper article, “The dog was so sweet-natured and loving, it was all she could do to wag her tail.”

So Princess went home with Amy, and for a while, all seemed well. The pressure sores on her hips healed, and she put on weight. The only concern was a swelling on her front leg—possibly the leg would later have to be amputated.

The swelling turned out to be cancer. After months spent becoming healthy again, Princess had to be euthanized after all.

The cruelty case against Princess’ owner is now in court. It’s an understatement to say it’s difficult to get pit bulls adopted. But once in a while, a special pit bull gets another chance.

Angel was found stuck in a drainage pipe in Shelby County. It took the work of an animal control officer and the fire department to get her out. She was taken to the Shelby County Animal Shelter, where no one expected her to come out alive.

But the staff fell in love with Angel, and animal control officer James Collins sent out a special plea on her behalf: “I know pits are just not easy to place. But this girl is special, she is so sweet. She has more kisses to give than can be counted. I promised I would give this girl a chance at salvation.”

Angel was rescued by a humane society in Indiana, and after temperament testing, which she easily passed, was put up for adoption. The adoption process for pit bulls is more involved and extensive than for other dogs, as you can imagine, but Angel found the perfect home with a young couple who had decided they wanted a dog rather than children.

The list of dogs such as these is longer than can be covered here. There was the beagle in Shepherdsville who was turned in because he wouldn’t hunt, and was adopted at the very last minute; the full-blooded German shepherd in Montgomery County who was transported to a no-kill shelter at a volunteer’s own expense; the Pomeranian found in the streets of Louisville with a note on his collar that said his owners were “having a baby and they can’t afford to take care of me”; and the puppy in Hartford that was left in a cemetery and attacked by a coyote, and though she had a rescue to take her in, died from her injuries.

If there is a common “good” theme for these dogs, it’s that they all had people who tried to help them. Sometimes they couldn’t be saved. But as one rescuer noted, “I know we can’t save them all but, by gosh, we can sure try.”