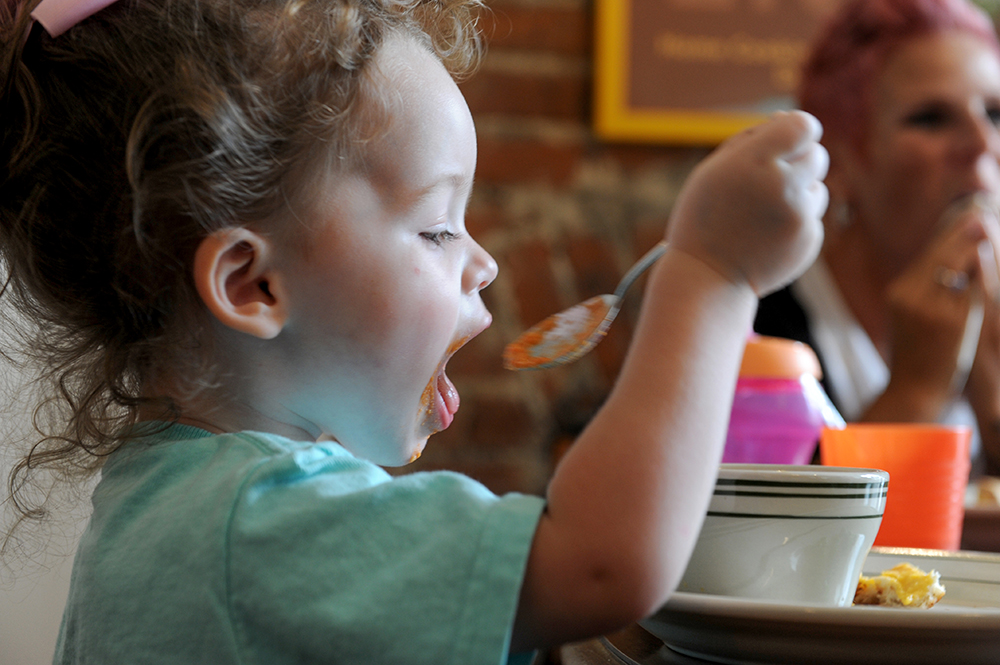 Lucy is a regular at Grace Café, a pay-what-you-can restaurant in Danville. Photo: Nick Lacy

Organizations help their communities during the holidays—and all year long

People helping people. It may sound simple, but it takes hard work from volunteers, countless charitable organizations and the donors who support them to strengthen communities, brighten futures and lessen mental or physical pain.

In the season of giving, we’re profiling some nonprofits across Kentucky that are making a difference in people’s lives with meaningful and often creative gestures.

These helpful organizations may boost your faith in humanity and will hopefully inspire you to lend a hand in your own communities.

A key difference is this community café opened in 2015 to combat food insecurity, its founder and executive director Rochelle Bayless says. The café and about 55 others nationwide are affiliated with the organization One World Everybody Eats, or OWEE,  designed to help ease hunger at the community level with a pay-what-you-can model.

Food insecurity, Bayless explains, is when someone is worried about having enough food for themselves or their families to eat, while hunger is defined as missing meals entirely.

“We want to make sure that we are an access point for a healthy, local sourced meal every day for anybody who needs it, so we can prevent hunger from happening in the first place,” she says.

With 10 employees, Grace Café is open daily for one three-hour meal service with an ever-changing menu. Some constants are Taco Tuesdays, and Fridays bring comfort food like meatloaf and mashed potatoes. With the help of partnering local farmers, there’s an emphasis on healthy, locally sourced ingredients.

There are suggested donations for meals, but with no proof of income requirement, patrons pay as they’re able to or can even “pay it forward” and donate toward others’ meals.

During a recent three-hour period, Grace Café served 137 meals, Bayless says, though the average is about 70 per day. The café seats 65.

“It’s not expensive,” she says. “It’s whatever you can pay. … The workers are friendly people and they make you feel welcome.”

About 60 percent of Grace Café’s funding comes from diners’ donations and the remainder from individual donations, corporate sponsorships and grants, Bayless says. Other community partners include Centre College, communities in Boyle and surrounding counties, and the city of Danville.

Bayless has worked as a chaplain and in the nonprofit sector and though the café isn’t religiously affiliated, she says her work there is spiritually satisfying.

“I also love to eat, and I love good food and I love community, and this seems to be a really good fit for me … it’s a really joyful mission,” she says.

Another OWEE-affiliated community café, a farm-to-table eatery called The Table, is in Louisville and one called Spark is slated to open in Versailles in December, its organizers say. Visit www.sparkcommunitycafeky.org for details and updates.

The caring and humble Biblical act of foot washing is recreated on the campus of University of the Cumberlands in Williamsburg each fall during Shoes 4 the Soul.

During this event, the university’s incoming freshmen, faculty and staff members wash the feet of participating children, providing them with new socks, shoes, a backpack full of school supplies and a few hours of fun activities.

More than 2,100 local children have been served since the program’s 2011 inception, with a current goal to serve 500 children per year.

Emily Coleman is vice president for Student Services and Jasmine Newport is director of Appalachian Ministries at the university. Both are involved with Shoes 4 the Soul, which they say originated with the women’s basketball team.

Students, faculty and staff, alumni, community members and others sponsor children each year for $30 each.

“Some students get really reverent with it, but most of the students just take the time to build relationships with those kids,” she says.

Coleman says this year one boy proudly showed off his new shoes to her, saying he could tell they made him jump higher and run faster than ever before.

“He kept saying, ‘My feet feel SO good!’” she says. “It’s those little moments that are so exciting.”

When a family suffers the heartbreaking loss of a newborn, a group of caring Owensboro volunteers offers a handmade and heartfelt gesture of sympathy through God’s Littlest Angels.

Tammy Boarman and Mary Fogle, both of Owensboro, met in a doctor’s office in 2014 and began chatting. Fogle is a retired seamstress and mentioned wanting to use her skills to start a new ministry.

Boarman, a pharmaceutical representative, said that she couldn’t sew but could help with promotions, and soon their idea took flight. They use donated wedding and prom dresses that volunteers fashion into infant wraps or gowns for newborns who have passed away.

Donated formalwear comes from as far away as California and Florida. So far, more than 1,500 dresses have been made and distributed among 24 participating hospitals, Boarman says.

The group occupies space in Owensboro Christian Church, and community volunteers take on different roles in the process as their time and abilities dictate, retrieving donations from drop-off points, disassembling donated dresses or cutting out patterns. Others sew the finished garments, which are then delivered to participating hospitals.

Overhead is low, Boarman says, but the group receives some monetary donations. God’s Littlest Angels has even helped other locations start similar ministries, including one in Bowling Green.

Volunteers save unused beads for bracelets that local youth make to include with each gown. The gowns also are affixed with tiny angel charms.

All the work is performed at no cost to recipients.

“We hope that dress brings comfort and we expect absolutely nothing in return,” Boarman says.

When you need help, it’s nice to know that your friends will assist with no strings attached.

Likewise, the Friends of Paint Lick, a community service organization, is open three days a week to connect people’s donated items with other people who need them, board president and volunteer Linda Caldwell says.

The nonprofit was founded in 1988 by then-middle schooler Kevin Brown, who was pursuing a community volunteer project and tapped local go-getter Dean Cornett, who Caldwell says was known for helping people. In no time, the two had cooked up a concept for Friends of Paint Lick.

Soon the group began offering GED classes and collected and distributed items like clothes and small household items, regardless of recipients’ income.

“(Cornett) always wanted it to be for everyone,” Caldwell says. “It didn’t matter how rich you were or how poor you were, if you wanted something it was yours, so we operated on that idea.”

Eventually Cornett’s health declined, and she passed away, Caldwell says. After a period of inactivity, community members rebooted the group in her memory about 15 years ago. Around eight volunteers help daily, she says, most hailing from Blue Grass or Inter-County electric cooperative households.

Local churches help with the effort, and along with others donate financially to help defray operating costs.

Caldwell says she still feels elated when she is able to provide the very thing someone was searching for.

“I think we all feel really privileged to be able to do that and feel blessed to have the strength to keep going,” she says.