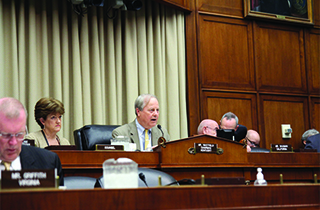 A Kentucky-style alternative to Environmental Protection Agency rules on coal-fired power plants continues to move through Congress with approval in late January by the House Energy and Commerce Committee. The next stop would be a vote by the full House of Representatives.

The proposal calls for new coal plants to meet greenhouse gas limits with technology that has been demonstrated to be commercially feasible. EPA regulations specify “carbon capture and storage” technology, which collects greenhouse gases before they are emitted from the power plant, and stores them in a permanent site, like underground rock formations.

Critics of the EPA rules say carbon capture and storage technology is untested, and could turn out to be prohibitively expensive. The rules were released in the fall and apply to future power plants. The EPA plans to release greenhouse gas regulations for existing plants later this year.

The alternative proposal is authored by Rep. Ed Whitfield, a Republican from Kentucky, and Sen. Joe Manchin, a Democrat from West Virginia.

With committee passage of The Electricity Security and Affordability Act, Whitfield said, “Under EPA’s extreme proposal, America would not even be able to build the most state-of-the-art clean coal-fired power plant, because the technology required under the proposed regulation is not commercially feasible. This bipartisan legislation allows for us to bring these proposed regulations to the forefront and have a public debate about the effect that they will have on jobs, energy costs, and economic growth.”

Electric co-ops have also weighed in opposing the EPA regulations.

Jo Ann Emerson, CEO of the National Rural Electric Cooperative Association, called for the White House to reconsider the EPA regulations, saying they threaten every household and business on a budget, not to mention the ability of electric cooperatives to continue providing reliable and affordable energy.

Emerson added, “We require the freedom to pursue new technologies and innovations. The EPA’s insistence to rely on carbon dioxide capture and storage technology that isn’t ready for prime time hamstrings us in a significant way.”