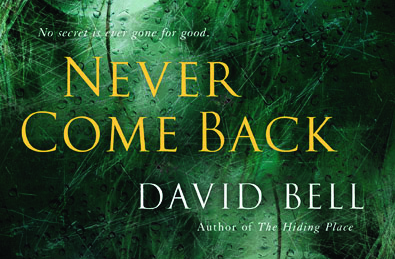 Bowling Green author and Western Kentucky University English professor David Bell never gave much thought to his parents’ lives before he was born. Like it does to most children, it seemed to him their stories only became significant upon having children. His surprise at discovering a bit of his father’s past translated into his latest mystery novel, Never Come Back (Penguin, $15, www.penguin.com).

Bell wastes no time pulling the reader into the mystery as the first chapter begins with Elizabeth, a no-nonsense mid-20s graduate student, discovering her mother has been murdered in her small-town Ohio home. Since Elizabeth knew her mother as a reserved person who kept to herself, the murder seems more than a random killing. The police think so, too, and they begin their investigation with Elizabeth’s Down syndrome brother, Ronnie.

While Elizabeth embarks on a quest to prove her brother innocent, she uncovers some shocking secrets in her mother’s past. Add to this an unfamiliar name in her mother’s will, and Elizabeth is forced to re-evaluate all she thought she knew about her family.

“My own writing has improved as I find myself applying the same lessons to it,” he says.

His works tend to center around his own environment with settings in mid-size college towns and characters who are students or faculty.

Bell grew up in Ohio, began his higher education in Indiana, and has also lived in Louisiana, Georgia, and Washington, D.C.

When asked by WKU Public Radio if living in Bowling Green has impacted his writing in any way, Bell replied, “I think Bowling Green is the kind of town that people look at as a great place to live. It’s a very beautiful town. But there are also always dark secrets in towns like this, and maybe people who live in a town like this don’t expect there to be as many dark secrets or weird stories as there are. So it’s kind of nice to peel that layer off the top of a town like this and see what’s underneath it.”

In his free time, Bell enjoys watching movies or walking in the cemetery near his house, and is an avid reader. Visit his Web site at www.davidbellnovels.com.