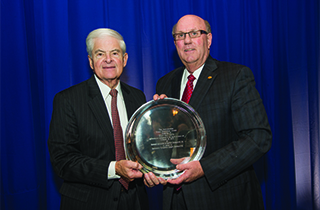 Billy Ray Smith, long-time farm leader and former Kentucky commissioner of Agriculture, accepts the 2013 Distinguished Rural Kentuckian Award from Bill Corum, president/CEO of the Kentucky Association of Electric Cooperatives at the association’s annual meeting banquet in Louisville. The award presentation described Smith’s career that includes two terms as Kentucky’s commissioner of Agriculture; 14 years in the Kentucky General Assembly representing Warren and Simpson counties; seven years as executive director of the Kentucky FFA Foundation; and 30 years managing a grain elevator and livestock feed products company. In accepting the award Smith said one of his proudest achievements was the role he played in passing a law that mandated that 50 percent of the funds Kentucky receives from the tobacco master settlement agreement be used to improve Kentucky agriculture. The electric co-ops of Kentucky have presented the Distinguished Rural Kentuckian Award annually since 1982 to recognize people who have improved the quality of life in the state.