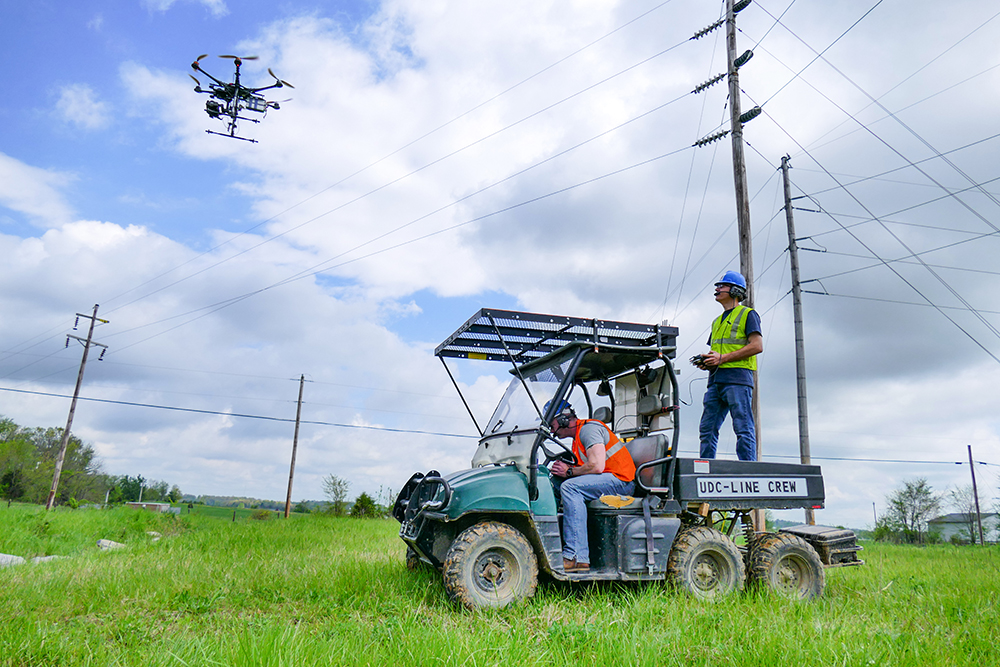 Did you know squirrels, lightning and trees have something in common? They all can knock out your electricity.

Electric cooperatives work hard to keep your lights on all the time, but “limited power outages are inevitable,” says Clarence Greene, safety and loss control manager at Kentucky Electric Cooperatives. “Getting power restored is important, but safety of lineworkers and the public comes first. The dangers of downed power lines need to be part of any conversation about power restoration.”

An electric utility’s basic job of keeping the power flowing 24/7 calls for maintaining a complex network of power plants, poles and wires. But it also means battling the unpredictable. Greene cites the top three troublemakers to electric reliability as trees falling on power lines and other interferences from vegetation, lightning strikes and animals going about their daily routines, especially squirrels chewing on electrical equipment.

Despite the potential problems, statistics show the percentage of time that the average American has electricity at the flip of a switch is a steady 99.97 percent.

“I don’t see big swings from year to year,” says Tony Thomas, senior principal engineer with the National Rural Electric Cooperative Association (NRECA). “If things are fairly consistent, that means the utility is operating about as efficiently as it can.”

“One method that many Kentucky cooperatives are using to prevent squirrels from causing outages is by installing electrostatic guards on overhead transformers,” explains Tony Dempsey, a safety and loss prevention instructor with Kentucky Electric Cooperatives. “The guard emits a static charge that deters squirrels or other animals from creating a short at the point where the main line is connected to the transformer.”

Utilities operate extensive right-of-way programs to keep vegetation away from power lines. Digital software can forecast the growth of trees and other plants so that utilities can prune branches before they cause a problem.

Other software tries to manage lightning by analyzing the age and wear on the utility’s equipment, which minimizes the damage from lightning strikes by replacing it before it fails.

By far the biggest factor in reliability comes from the decades of building, maintaining and updating the massive machinery of the nation’s electric grid at power plants, high-voltage transmission lines, banks of substations and transformers and local distribution lines.

Working out of three high-voltage demonstration trailers, Kentucky Electric Cooperatives helps train lineworkers to troubleshoot outages, including both overhead and underground equipment and devices. Vendors and electrical equipment manufacturers participate in workshops that ensure equipment is used and operated safely and efficiently.

“Kentucky co-ops have lineworkers on call every night and each weekend to respond to outages,” Thornton says.

Keeping the grid up and running calls for a lot of planning among utilities to anticipate how electricity will be used in the future. Part of that reliability planning focuses on protecting the electricity system from computer-based digital attacks.

As director of government affairs for NRECA, Bridgette Bourge is among those overseeing how digital technology affects reliability for electric co-ops and their consumer-members.

“Cyber helps a lot on reliability because it gives us the ability to monitor and know everything right away,” she says. “But whenever you increase reliability through a technology, you do potentially open up vulnerabilities as well from the security angle.”

Bourge says it’s routine for a co-op to receive tens of thousands of attempts each day to break into its computer network. She says NRECA cyber-reliability programs aim to help protect against a range of threats, from broad attempts to shut down parts of the electric grid, to more focused efforts to corrupt pieces of software used by electric cooperatives.

Cooperation among cooperatives is a cooperative principle. Much like traditional safety training, Kentucky Electric Cooperatives works with NRECA and other partners to share techniques for protecting utility systems from internet invaders. Cyber mutual-assistance agreements utilize teams of information technology experts in the case of a cyber incident or natural disaster.

“You will never be 100 percent cybersecure,” says Chris Hayes, chief technology officer with Kentucky Electric Cooperatives. Hayes serves as a liaison to Kentucky co-ops on information technology and cybersecurity. “The bad guys buy the same hardware and software as co-ops and other major companies to find flaws and exploit them.”

Hayes sees electric co-ops as well-placed to pay attention to cybersecurity. He says as community-based, member-led businesses, electric co-ops have a unique interest in protecting the reliability of the local community’s energy supply.

“Cybersecurity has to be a priority in everything we do,” says Hayes. “Protecting the electric grid means protecting our family, friends communities.”