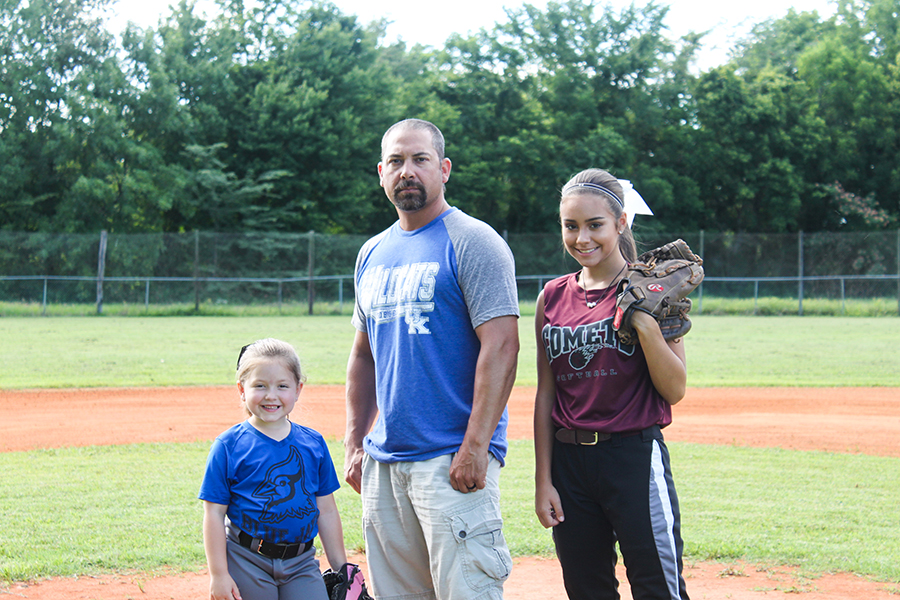 Jimmy Allen with two of his softball team members, who also happen to be his daughters Emmagen, 12, and Eastyn, 6. Photo: Christa Allen

“If you give 100 percent, everything will be fine.”

Jimmy Allen learned that life lesson playing baseball throughout his youth. Now, he is teaching daughters Emmagen, 12, and Eastyn, 6, that same lesson in the same way. Allen is a coach for a girls softball team in Carlisle County, helping the players learn the sport and all the life lessons that come with it. This year, Allen is first-base coach, though he has served in other positions over the years.

As a first-class lineworker who has been with Gibson EMC since 2007, Allen sees another parallel between his passions of work and softball—that of teamwork. “Teamwork is essential in work and on the field,” he says. “Absolutely essential.”

Allen demonstrates that daily in his work and by coming to every practice and continuing to coach despite a broken leg that ended his own competitive softball career.

He also shows his dedication to his community through competitive cooking. He and his cooking team, Trippple D, prepare food to give to various charities.

“I try to help in every way possible,” Allen says.

All three titles belong to Jude Canchola, and while they are distinctly different roles, the purpose of all three is the same: to help the community by helping its people.

For Canchola, it started in high school when his Little League baseball coach introduced him to firefighting. As he learned to fight fires, he also learned to build trust in himself and the men beside him. A sense of community soon emerged.

“I had to trust in their abilities as well as my own,” Canchola says. “I began to feel a real sense of pride knowing that our actions could really help people.”

Today, his regular job with Owen Electric, his volunteer job as a firefighter, and his annual job with Special Olympics all blend to paint a portrait of duty, service and honor.