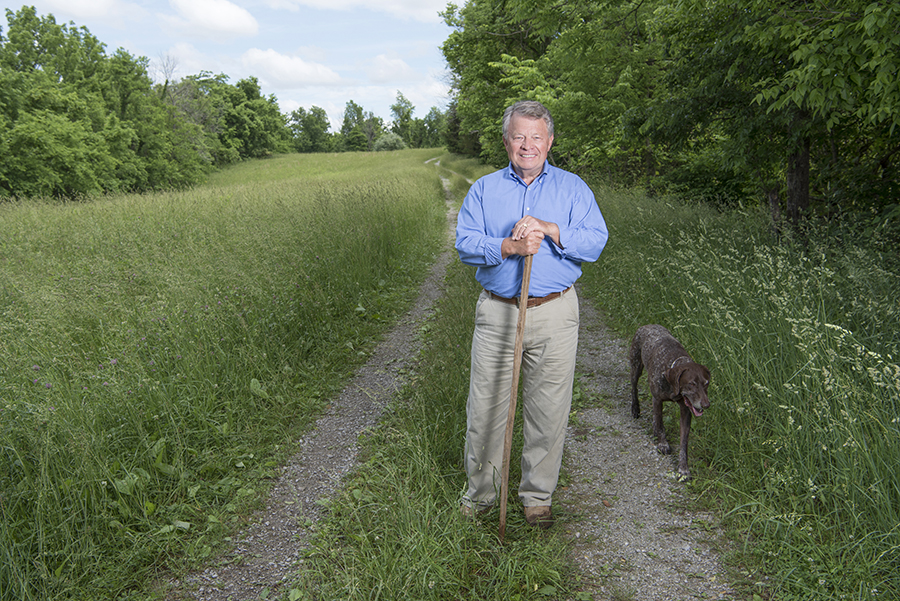 Byron Crawford’s career has taken him to many lesser-traveled paths, like this one in Waddy. The paths often lead to some of Kentucky’s best people, places and stories—and Crawford is just the right person to tell them. Photo: Tim Webb

As Byron Crawford tells it, his story doesn’t begin on the Lincoln County farm where he was born in 1945, or with the 1960s high school field trip that led to his first radio broadcast, or even when he left WHAS-TV in 1979 to take the mantle of the coveted Kentucky Column at Louisville’s The Courier-Journal.

Instead, the roots of Crawford’s journey of more than 5,000 newspaper columns, television and radio reports, and the monthly dispatches appearing on the back page of Kentucky Living since 2011 can be found at his father’s knee in rural Kentucky.

“I listened to a lot of great storytellers, friends of my Dad at the feed mill or at the

stockyards, or in the tobacco barn, people who dropped by to visit,” Crawford recalls. “And I would have to be quiet, and the other kids would, too. We would all have to listen.”

The Kentucky Journalism Hall-of-Famer says hearing how those storytellers handled a story may have been the best education he ever received on how to present a story.

“They knew how to get you hooked at the beginning. They filled it with some details that were interesting and informative. And they usually tied it up in a bow at the end, where it had some meaning,” Crawford says. “If it was a funny story, that’s where the biggest laugh came. If it was a story that pulled at your heartstrings, then that ending would do it.”

“There’s just a blatant honesty,” Adams says. “He can tell the story in real terms, really understandable terms without doing any embellishment or any alteration of the facts at all. He’s got that level of detail and I think that’s a very rare talent to be able to do that. Byron is Kentucky’s truthteller.”

Adams recalls some of the people profiled by Crawford over the years, among them a hubcap collector “someplace on 27 between Stanford and Pulaski County,” a top-notch slingshot target shooter who would “throw cans up in the air and the guy could bust them,” and a mushroom hunter who astounded Crawford with his ability.

“I think he’s a mirror for those of us who have a pride similar to his,” Adams says with a smile. “Byron is proud of rural Kentucky, and it just shows.”

The only child of Delbert and Lucille Crawford, Byron Garrison Crawford grew up on the family farm halfway down a 2-mile-long gravel, dead-end road near Hanging Fork Creek, adjacent to the farms of his uncle and great-aunt. Neighbors would drop by unannounced to visit.

“We raised tobacco, milked cows, had a few cattle, raised some corn, and I had the run of all of that territory,” Crawford recalls. “Fences didn’t mean much to us in those days.”

Looking out the window of his high school, the young Byron would daydream about exploring Kentucky, envisioning a career in forestry.

“I can remember the desk. I remember the window in the school. We were on the second floor. I can remember when everybody else was supposed to be working, and I was, too,” Crawford chuckles. “I had my eye on this fence line of woodlands off in the distance dreaming about maybe what was in there and wishing that I could get in there.

“I just roamed through the creeks and streams and woods and briar patches from daylight to dark sometimes, and I think it gave my imagination a real chance to develop.”

That inborn curiosity turned out to be a natural fit for a gifted writer who says he has learned something from almost all of his interviews.

“I always wondered what was the little story within the big story,” Crawford explains. “That was kind of what I wanted to build my career around.”

His career includes radio news reporting for both WAKY and WHAS in Louisville and smaller radio stations in Danville and Richmond. While working in the late 1960s at WCKY in Cincinnati, Crawford would also serve as a disc jockey and television anchor with an Armed Forces Network Reserve unit.

But it was his work as a WHAS-TV feature reporter that would set the course for the rest of his career: nearly three decades of Louisville Courier-Journal columns and statewide television exposure on KET’s Kentucky Life program.

Eric Crawford, the oldest of Byron and Jackie Crawford’s four children, is now a sports reporter for WDRB-TV in Louisville. Eric, who also wrote for The Courier-Journal, says his father is among the last in a distinguished line of statewide newspaper columnists.

“He’s interested in things and wrote about things that may or may not have a place in mainstream media anymore,” Eric says. “So, he occupies a very important place in my view of telling the stories of this state from border to border, to people in the cities that don’t always hear those stories.”

When his friend and legendary columnist David Dick died one year later, Byron humbly accepted his latest assignment—the back-page column of Kentucky Living that Dick had written for 21 years.

“I’ve tried to keep my writing on that back page in the vein that I thought David would appreciate,” Crawford says.

“The wonderful thing about Byron is that he has an innate sense about being able to listen,” Dick says. “He listens to people. And, now when people are talking over one another all the time, by phones or cells or whatever, he makes people slow down. His is a calming manner of writing that makes you want to curl up with a good book or just learn to sit there and listen to him.”

“He’s always felt an affinity for the people here,” she says. “He’s loved all the people that he did stories on and he remembers them after all these years.”

To his legions of Kentucky Living fans whose letters and emails praise past columns and submit ideas for future ones, Crawford finds simple truths and profound meaning in the real-life stories of Kentuckians.

“I want this back page to be the people’s chance to tell their stories,” Crawford says, smiling. “I’m just a guy who takes down the notes.”