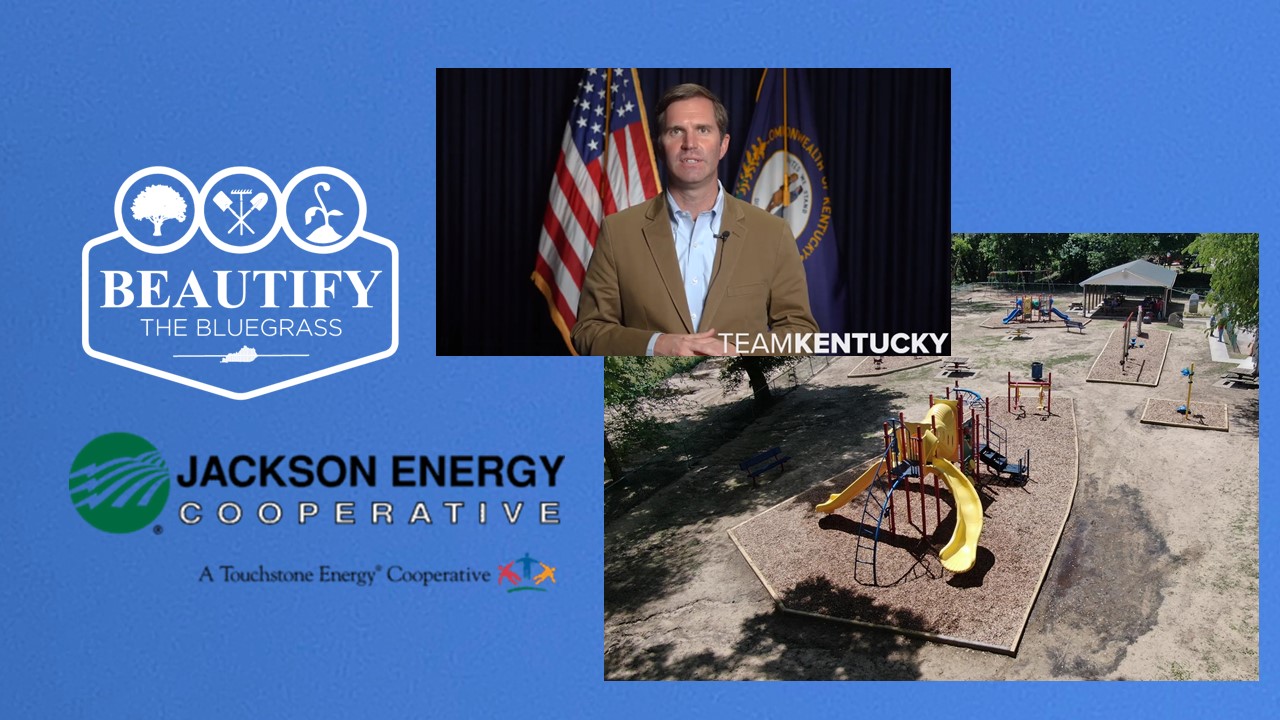 Recognized for restoration of Beattyville City Park after devastating flooding

The restoration of Beattyville City Park by volunteers from Jackson Energy Cooperative has been named the winner of the 2021 Beautify the Bluegrass Governor’s Award by Governor Andy Beshear and Kentucky Electric Cooperatives.

More than 45 Jackson Energy Cooperative employees volunteered 630-man-hours over a two-day span to help restore the Beattyville City Park after it was submerged and devastated by historic flooding earlier this year. The park was left in total disarray and was no longer safe for children in the community. The flood waters left behind damaged fencing, broken equipment and mounds of sand that covered everything from the top of the slides to the gutters on the shelter.

Under the guidance of Beattyville Mayor Scott Jackson, Jackson Energy Cooperative employees worked alongside several City of Beattyville employees to reconstruct the required safety fall-zone around each piece of play equipment, shoveled tons of sand and a truckload of mulch, repaired fencing, pressure-washed the play equipment and shelter building, revitalized the landscaping and added a final touch of paint.

“I am proud to partner with Kentucky’s electric cooperatives to support homegrown beautification efforts across the commonwealth and appreciate the cooperative spirit of Beautify the Bluegrass,” Beshear said in a video posted on his social media channels. “When we say “Team Kentucky,” this is what we’re talking about, Kentuckians who care about their communities and take action to help. All of the projects deserve recognition, and the work by these volunteers truly exemplifies concern for community. I am so pleased to present Jackson Energy Cooperative with the 2021 Beautify the Bluegrass Governor’s Award.”

“The employees of Jackson Energy understand the importance of a strong community and we are committed to doing our part,” says Carol Wright, president and CEO of Jackson Energy. “It was our privilege to work alongside the leaders of Beattyville-Lee County to restore their city park and to give a vital piece of their community back to them. When given the opportunity to give back, we are ready to make a positive impact for the families we call neighbors.”

Kentucky Electric Cooperatives, the statewide association of Kentucky’s 26 locally owned and operated electric cooperatives, joined the “Beautify the Bluegrass” effort in 2018, in partnership with the Governor’s Office, because the initiative’s goals align with the cooperatives’ mission to improve quality of life in the communities they serve.

“Cooperatives are led by, belong to and were built by the communities we serve,” says Chris Perry, president and CEO of Kentucky Electric Cooperatives. “Our member co-ops are excited to partner with Gov. Beshear to recognize Kentuckians who roll up their sleeves and complete beautification projects because they care about their community.”