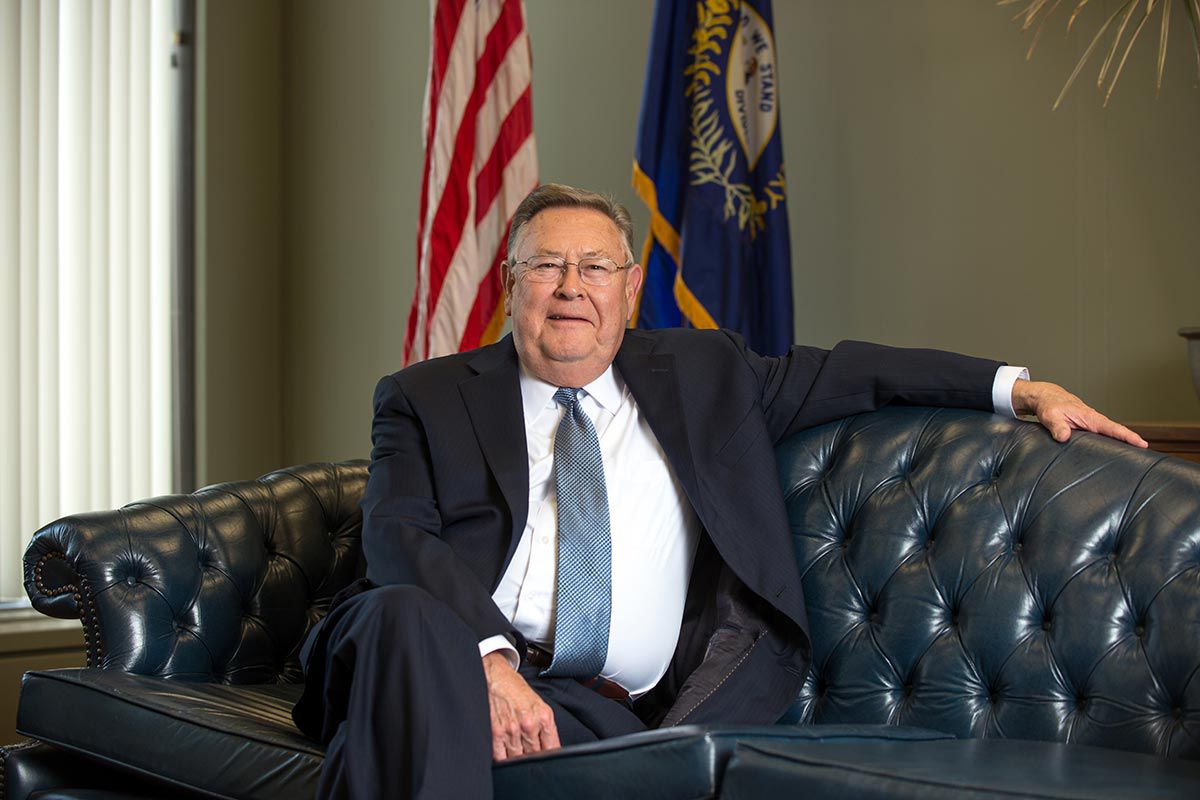 Energy Secretary Len Peters, at his office in Frankfort, discusses Kentucky’s future of electricity in light of the EPA’s Clean Power Plan, which was announced in August. Photo: Elliott Hess

“Think of energy and environment, balance them, but make sure you don’t forget economy.”

As Len Peters closes the book on his eight years as Kentucky’s first Energy and Environment Cabinet secretary, he hopes his successor takes the time to read it.

“Listen to your stakeholders. See what the citizens want to say, see what the regulated community wants to say,” Peters says, in relation to the federal government’s Clean Power Plan requirements.

From his first day as secretary of the newly combined Energy and Environment Cabinet eight years ago, Peters and Governor Steve Beshear looked toward the future and warned that Kentucky’s energy policy will be increasingly shaped by decisions at the national level, a reality that intensified this past year.

I chatted with Secretary Peters in Frankfort before the November gubernatorial election to discuss the challenges facing the incoming governor and Kentucky’s next energy cabinet secretary. Peters had already decided he would retire from state government on the last day of the Beshear administration, December 7.

Telling Kentucky’s story in Washington
“When we were preparing the energy plan in 2008, our thinking was not if but when are we going to see greenhouse gas emissions controls,” says Peters. “It was clear then that discussions about reducing emissions must include asking, how can we do that without doing significant harm to our economy?”

Fast forward to June 2013 when President Obama announced his intention to reduce greenhouse gas emissions by focusing exclusively on the electric utility sector—which in effect would accelerate the use of natural gas rather than coal for electricity generation.

Jobs in Kentucky’s coal fields were starting to disappear. But there’s more to the story than that.

Kentucky’s historic use of coal to generate more than 90 percent of the state’s power supply is the basis for the state’s reliable, low-cost electricity—of major importance to manufacturers employing more than 230,000 people.

Peters predicts the costs to comply with new environmental regulations will likely lead to higher prices for both electricity and manufactured goods.

Peters and Beshear met with Environmental Protection Agency Administrator Gina McCarthy in Washington to talk about the economic impacts, “and to open up a line of communication about what was different in Kentucky and manufacturing states overall,” Peters says.

Drastic changes for Kentucky
Throughout the comment period for the proposed federal legislation, Peters and Assistant Secretary for Climate Policy John Lyons made repeated trips to Washington. “More meetings than I want to count,” Peters says, “talking about why it was important for the EPA to look at emissions on a state-by-state-by-state basis. We continued to make that argument and those points right up to the very end.”

The EPA’s revised Clean Power Plan stunned Kentucky officials when it was released on August 3. “The final rule very much surprised us,” Peters says. “It was very, very different from the proposed rule. The final rule came out based more on a regional analysis around the eastern, western, and Texas interconnects” rather than the states, to calculate the final requirements.

In the original proposal, Kentucky would be required to cut carbon dioxide emissions by 18.6 percent. The final rule is much steeper, requiring more than a 30 percent reduction.

“That is the largest change from proposed to final than any other state in the nation,” Peters says.

When the EPA’s regulations were finally published in the Federal Register on October 23, Kentucky and 25 other states, as well as the National Rural Electric Cooperative Association (NRECA) and numerous other groups, filed lawsuits against the plan.

The challenge ahead
Peters and his staff spent many weeks preparing transition documents for the next administration that include background information, timelines, and other practical details.

A key decision facing the Matt Bevin administration will be whether to submit a state implementation plan to the EPA by the September 6, 2016, deadline.

At a gubernatorial debate before the board of the Kentucky Association of Electric Cooperatives in September, Bevin instructed utilities not to comply with the EPA requirement, “because, as a state, we will not comply. As a governor, I will not submit that plan.”

Peters, however, makes the case for a plan for Kentucky prepared by Kentuckians.

“That way we can take in issues that are specific to our state and build a plan around those,” Peters says. “We’ve had numerous conversations with a large number of stakeholders, utilities, and various other groups, virtually all of them—but not all of them—have said ‘the state should prepare a plan.’

“I believe that that is the most compelling evidence that any incoming governor should be listening to. What are the stakeholders saying? Don’t listen to what Len Peters says—listen to what the stakeholders say. What is the regulated community saying? What are those people who are interested saying? And overwhelmingly it is, ‘Prepare a state plan.’

“Do not take the chance of having a plan that is not approved by EPA and having to take their plan as the controlling regulatory plan.”

Why the final Clean Power Plan surprised Kentucky
During the comment period for the proposed greenhouse gas regulations, Peters and Governor Beshear went to Washington to explain the role of affordable, reliable coal-generated electricity in Kentucky’s manufacturing economy to EPA Administrator McCarthy. Later Peters and Kentucky’s Assistant Secretary for Climate Policy John Lyons had additional meetings in Washington to give more insights into the potential economic impacts of regulating greenhouse gas emissions.

To plan or not to plan?
A key feature of the Clean Power Plan is the requirement that each state submit an implementation plan to the Environmental Protection Agency in Washington. Those plans must give details of what actions that state will take to meet the greenhouse gas limits in the new regulations.

Such plans must be approved by the EPA, and the EPA can impose plans on states that do not do so by the deadlines. Many state governors have said they intend to boycott that requirement while they wait for the various legal challenges to the plan to make their way through the courts. On the campaign trail last fall, then-candidate and now Kentucky 62nd Governor Matt Bevin said, “I will not submit that plan.” But that could be a risky strategy.

Peters said he and former Gov. Beshear believe “a plan prepared by Kentuckians for Kentucky is best for the Commonwealth.” Peters said the majority of conversations with stakeholders, utilities and other groups lead to the same conclusion — “the state should prepare a plan.”

Understanding conflict over the EPA’s Clean Power Plan
Many lawsuits have already been filed challenging the EPA’s Clean Power Plan from several different standpoints. A major point to be settled in federal court is whether or not the Environmental Protection Agency has the authority to regulate greenhouse gases. Peters offers some insights into the legal battles that are underway in Washington.

Nancy Grant from the January 2016 Issue