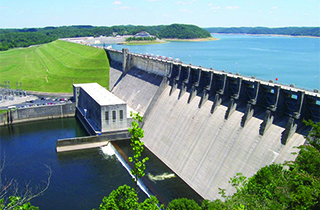 Converting the natural energy of moving water to mechanical energy to spin a turbine to generate electricity – hydropower – can be done three ways.

Building a dam (impoundment) is the most common method. Water accumulates upstream behind a barrier, then is released so it will move through the equipment at the dam to generate electricity.

Building a spillway (diversion) splits a river into two sections. On its way downstream some of the water is channeled toward turbines to generate electricity. The other section flows without obstructions in the natural watercourse.

Building a pair of reservoirs (pumped storage) is the most complicated method. Some river water enters a closed system nearby with one reservoir of water uphill from the other. Water flowing from the upper reservoir to the lower one generates electricity. Later, the water that has accumulated in the lower reservoir is pumped back up to the first reservoir, where it can be released the next day to generate electricity again. The cycle repeats with the same water.

More than 600 electric co-ops across the country purchase power from 134 federally owned and operated dams, most built between the late 1930s and early 1960s. Hydropower accounts for roughly three-quarters of the renewable energy generated within the electric co-op system.

Today about 2,500 dams provide conventional and pumped-storage hydropower to all kinds of utilities in the United States. However, a 2012 report from the U.S. Department of Energy revealed that the majority of the nation’s dams – about 80,000 – do not provide any power.

According to the DOE report, “Many of these dams could be converted to generate electricity with minimal impact to critical species, habitats, parks, or wilderness areas.”