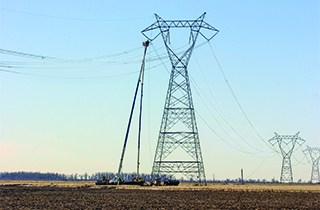 This is the second of three columns about the regulations that keep order in the day-to-day operation of electric utilities.

The road to safe, reliable electric energy looks straight and simple when you’re out with linemen. The other morning I laced up my steel toe boots and put on a hard hat to meet a construction crew. The grasses were still dew-covered, and the sun barely up, as I walked across the field. When the men drove their rumbling bucket trucks into position, I had to make sure I wasn’t getting in the way of progress while they dug the hole, set the pole, and raised the wire.

The men chatted a bit as they called out instructions to each other – yet remained totally focused on the job, doing each task step by step to get everything connected exactly right. One crew member says he figures this latest addition to the power system will still be functioning long after he retires.

100 years of effective regulation
The North American power grid is an engineering marvel of gigantic proportions, often called the largest piece of machinery on earth. Everywhere, the safety rules are the same, and the science rules are the same – electrons flow this way, not that way.

A good place to see how these rules overlap and intersect is at the state level.

Within each state, electric utilities operate as monopolies within the geographic boundaries of their service territories. In the early part of the last century, people realized it’s in the consumer’s best interest for an independent authority to watch over – in other words, to regulate – the activities of these sole providers of such an essential service.

Rob Thormeyer, director of Communications at the National Association of Regulatory Utility Commissioners, says, “The job of state public service commissioners is to ensure that electricity rates are fair, just, and reasonable, and that utilities remain financially stable. The whole system is set up to keep rates as affordable as they can be. It’s been working that way for more than 100 years.”

Although every state regulates electricity, each chooses what kinds of electric utilities to regulate. Within each state utility company, business models are different, local resources are different, and local geography is different.

Some states say that an electric utility company can only provide one kind of service. A utility might be limited to only providing electricity directly to consumers. In that kind of state, another separate utility would only be allowed to generate and transmit bulk power to the local distribution utilities. But no matter who generates the power, or who transmits it to the local utility, the cost to do so is passed along to end consumers.

Among other jobs, the Federal Energy Regulatory Commission oversees what happens when electric utilities transmit bulk power across state lines. If a utility sends electricity from a power plant in Ohio through high-voltage lines to consumers in Kentucky, certain FERC rules spell out how each utility must calculate the costs involved.

At the North American Electric Reliability Corporation, the focus is not on money, but on service. NERC’s goal is to ensure that in each region of the United States, Canada, and a section of northern Mexico, there are enough power plants generating enough electricity – plus some to spare in case of an emergency – to meet consumer demand all the time. NERC regulations cover minute-by-minute operations at utilities during each season of the year.

The Environmental Protection Agency has completely different goals. Regulations from this federal agency cover such things as what can or cannot go into the air as electricity is generated.

As rules change, here’s what can happen: an EPA rule concerning power plant emissions reduces the amount of electricity flowing into the grid from a coal-based power plant in one state. Electricity generated using another resource in another state must be transmitted across state lines to meet demand in the first state.

That single shift affects how the utilities in both states meet NERC’s standards for steady, reliable power. It also sets off a chain of financial transactions that must be examined. FERC and each of the individual states’ public utilities commissions will review the dollars and cents involved in doing things differently, then make certain that customer bills are figured correctly.

As Americans strive to put new energy ideas into practice, every tug here or tweak there to existing rules and regulations sets off a wave of other actions – and new expenses for utility companies – changes that must be paid for and will eventually show up on your bill.

Next month: the new regional organizations that coordinate the flow of electricity

Kentucky laws allow for many different business models. In a “vertically integrated” utility, a single company may do everything – generate power, send it through high-voltage transmission lines, and deliver electricity directly to end consumers. Or a company might only generate and transmit power, or only distribute electricity to consumers. Any business plan is okay – Kentucky’s regulated utilities range from small, single-focus companies to multi-tasking giants.