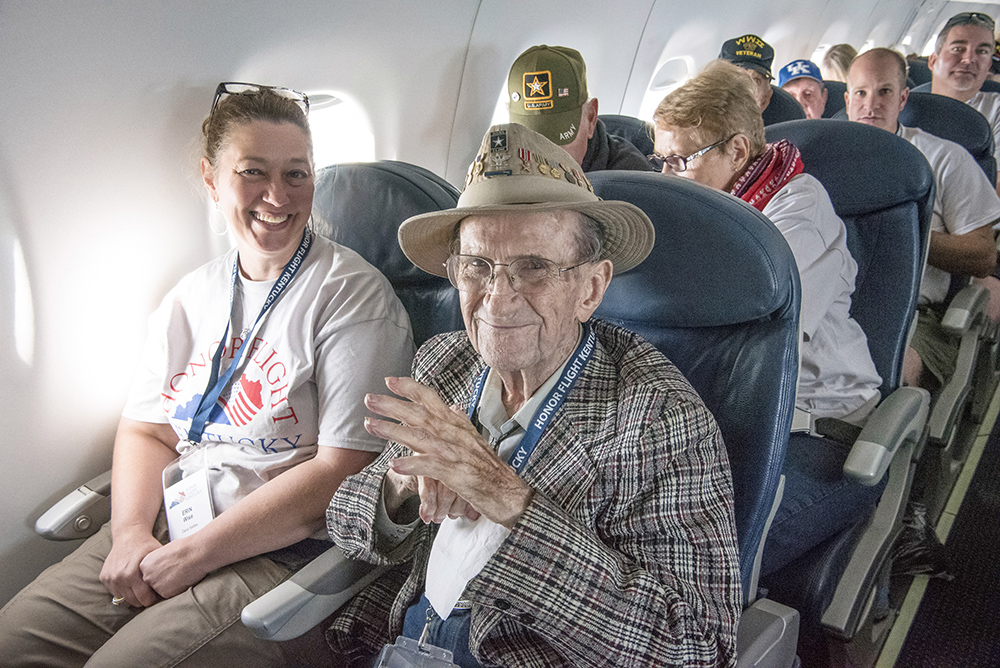 Erin Wise, a 27-year employee at Taylor County Rural Electric Cooperative Corporation, had heard the excited recollections of those who had gone on an Honor Flight.

Designed for veterans, the flights take vets to Washington, D.C., to see the war memorials and be honored for their contributions to the country. Erin decided to volunteer as a guardian, someone who helps veterans with individual needs.

The day was “awesome,” Erin says. The emotions of the day and the appreciation of the veterans remained with her long after the trip was over. She decided to volunteer again—and then again.

The third time Erin was a guardian for her father, James Thompson, who served during the Korean War.

“Every American should get to see what happens on those trips,” Erin says. “Such great stories. The one thing that impressed me most was that regular citizens come up and thank the vets and want their picture taken with them. I will always have that time with my dad and the stories he told me about serving in Alaska.”

Through Gideons International, an association of Christian business and professional people, some 2 billion Bibles in 100 languages have been distributed in 200 countries.

“This is close to my heart,” Kerry says. “Placing the Bibles is a mission I can do right here at home.”

Kerry presents a Bible to every fifth-grader in the Magoffin County school system. He presents Bibles with camouflage covers to military recruits, large-print Bibles to nursing home residents, New Testaments to trick-or-treaters, and Bibles without covers to inmates. (Hardcovers are not allowed in prisons.) He also gives Bibles to motels, doctor’s offices, high school seniors and most anyone who desires one.

“I also speak at churches,” Kerry notes. “Some will bring the Bible they got in the fifth-grade with them. They still remember that. It is always exciting to hear the stories.”