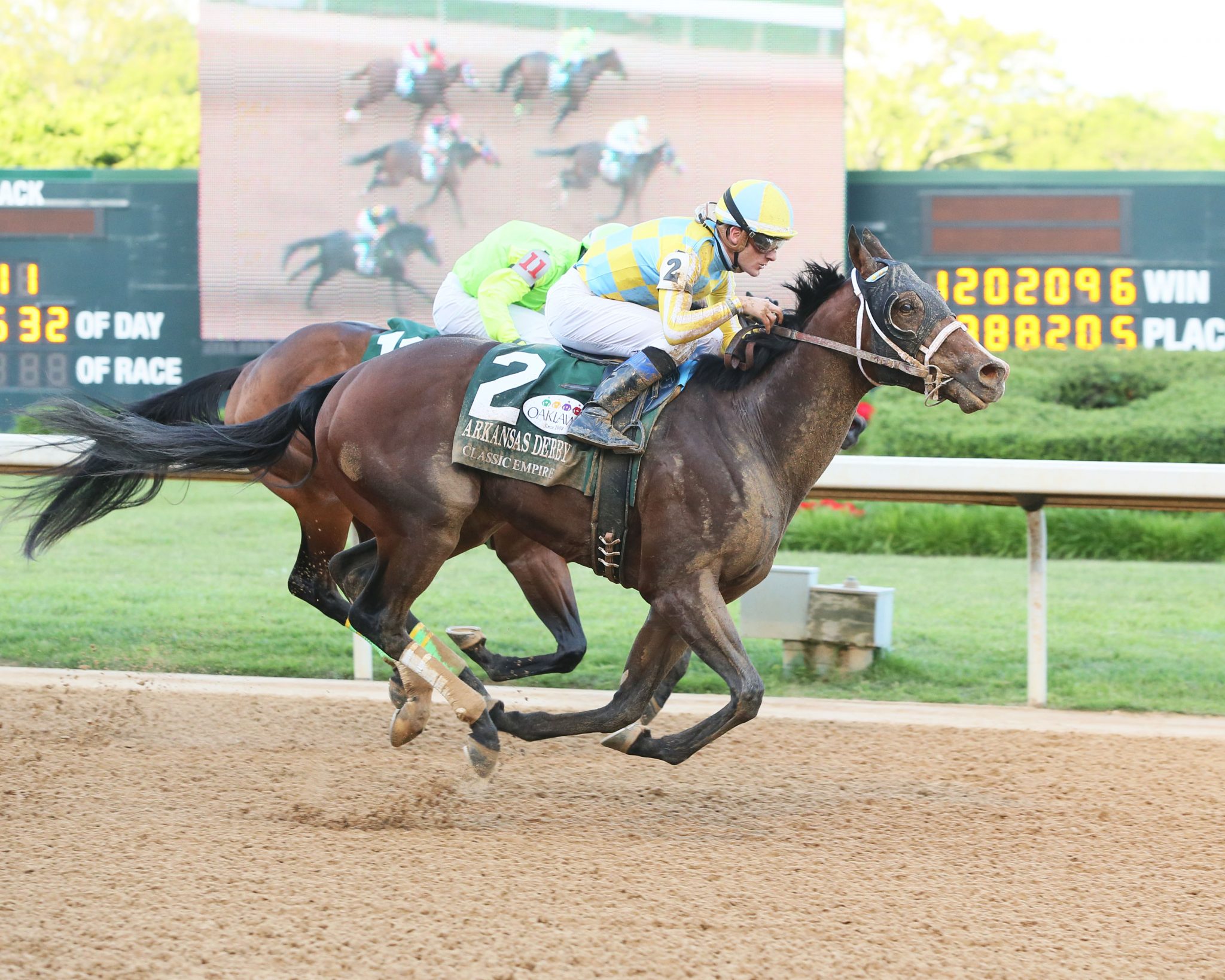 LOUISVILLE, Ky. (Wednesday, May 3, 2017)–John Oxley’s Classic Empire, the unanimous Eclipse Award selection as champion 2-year-old of 2016 and a three-time Grade I winner, has been established as the 4-1 morning-line favorite in a field of 20 3-year-olds and two also-eligibles entered for Saturday’s 143rd running of the $2,395,800 Kentucky Derby Presented by Yum! Brands (Grade I).

The field for the Kentucky Derby with jockey and morning-line odds from the rail out, is: 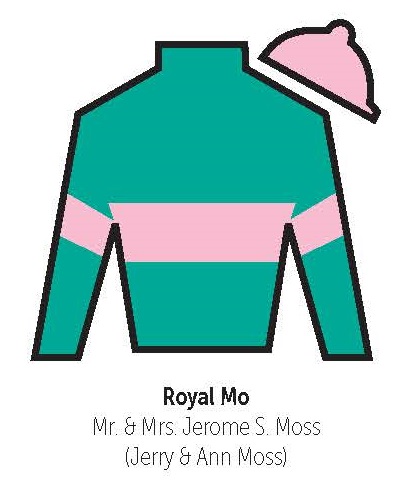 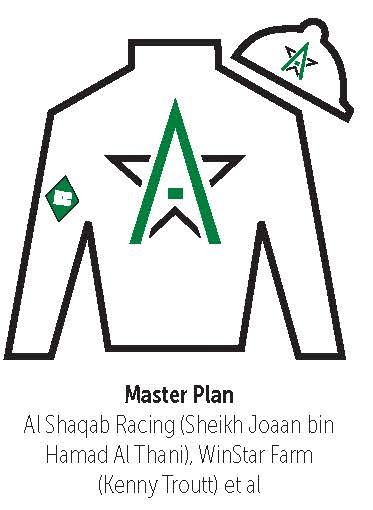 All starters will carry 126 pounds.

The 1 ¼-mile classic that starts the Triple Crown series serves as the centerpiece of Saturday’s 14-race program and will go as the 12th race with a 6:46 p.m. (all times Eastern) post time. First post time Saturday is 10:30 a.m.

Trained by Mark Casse, Classic Empire will be attempting to give Oxley a second Kentucky Derby victory to join 2001 winner Monarchos.

A two-time winner at Churchill Downs that includes a debut victory last year during Derby Week, Classic Empire won the Arkansas Derby (GI) in his most recent start. He closed out 2016 with victories in the Breeders’ Futurity (GI) at Keeneland and the Breeders’ Cup Juvenile (GI) at Santa Anita.

Julien Leparoux, who has been aboard Classic Empire for all five of his victories, has the mount Saturday as he seeks a first Kentucky Derby victory and what would be a first for Casse. Classic Empire will break from post position 14.

Casse also will send out Conrad Farms’ State of Honor. The Florida Derby (GI) runner-up, 30-1 on the morning line, will be ridden for the first time by Jose Lezcano and break from post position six.

Co-second choices on the line at 5-1 are the Brooklyn Boyz Stables and Teresa Viola Racing Stables’ Always Dreaming and Whitham Thoroughbreds’ McCraken.

A winner of his past three starts including a five-length victory in the Florida Derby, Always Dreaming is trained by Todd Pletcher and will be ridden by John Velazquez, both of whom are seeking their second victory in the Run for the Roses. Super Saver won the 2010 Derby for Pletcher and Velazquez rode Animal Kingdom to the 2011 Derby win. Always Dreaming will break from post position five.

Pletcher will be sending out two other starters: Bridlewood Farm, Eclipse Thoroughbred Partners, and Robert LaPenta’s Tapwrit and Calumet Farm’s Patch. Al Shaqab Racing and WinStar Farm’s Master Plan is one of the also-eligibles.

Winner of his first four starts with three coming at Churchill Downs, McCraken is trained by Ian Wilkes. Wilkes, who was the exercise rider for 1990 Kentucky Derby winner Unbridled and assistant to trainer Carl Nafzger in 2007 when Street Sense won the Derby, is seeking his first Kentucky Derby victory.

Brian Hernandez Jr. will be riding in his second Derby and break McCraken out of post position 15.

Isabella de Tomaso’s Irish War Cry is the fourth choice on the morning line at 6-1.

Daylight winner of the Holy Bull (GII) and Wood Memorial (GII), Irish War Cry will attempt to give trainer Graham Motion a second Kentucky Derby victory to place alongside Animal Kingdom. Rajiv Maragh has the mount on Irish War Cry, who will exit post position 17.

In addition to Classic Empire and Always Dreaming, two other Derby entrants are Grade I winners.

Jerry and Ann Moss’ Gormley, winner of the Santa Anita Derby (GI) and FrontRunner (GI), is trained by John Shirreffs. The owner-trainer combo won the 2005 Derby with Giacomo.

Three-time Derby-winning rider and newly elected Hall of Famer Victor Espinoza will ride Gormley and attempt to join Bill Shoemaker as a four-time race winner, second only to the five wins by Eddie Arcaro and Bill Hartack.

Listed at 15-1 on the morning line, Gormley will break from post position 18.

The Mosses also entered by Royal Mo, who is the first also-eligible. Three-time Kentucky Derby-winning rider Gary Stevens has the mount if Royal Mo gets in the race.

Klaravich Stables and William Lawrence’s Practical Joke, winner of the Hopeful (GI) and Champagne (GI) last year, is trained by Chad Brown and will be ridden by Joel Rosario, who rode Orb to victory in 2013. Listed at 20-1 on the morning line, Practical Joke will break from post position 19.

Also seeking to build on their Derby resumes will be the human connections of Blue Grass Stakes (GII) winner Irap.

Reddam Racing, trainer Doug O’Neill, and jockey Mario Gutierrez will be shooting for their third Derby victory and a consecutive score on the heels of Nyquist in 2016. The team first hit Derby gold in 2012 with I’ll Have Another.

Should Irap, who broke his maiden in the Blue Grass in his most recent start, prevail, Reddam Racing would join three other owners to post victories in back-to-back years. The feat has been accomplished four times, most recently in 1972-73 by Meadow Stable with Riva Ridge and Secretariat.

Six trainers have won the Derby in consecutive years, most recently accomplished by Bob Baffert in 1997-98 with Silver Charm and Real Quiet.

Gutierrez could become the seventh rider to win the Derby in back-to-back years with the most recent being Espinoza (2014-15).

Irap, listed at 20-1 on the morning line, will break from post position nine.

Calumet Farm, which has won a record eight Kentucky Derbys, is represented by three runners in Hence, trained by Steve Asmussen, Sonneteer, trained by Keith Desormeaux and Patch.

Adding a touch of foreign intrigue to Derby 143 is Thunder Snow (IRE).

Winner of the UAE 2000 Guineas (Group III) and the UAE Derby (Group II) in his lone starts on dirt, Thunder Snow will represent Godolphin Racing’s 10th Kentucky Derby starter. Listed at 20-1 on the morning line, Thunder Snow is trained by Saeed bin Suroor and will be ridden by Christophe Soumillon, breaking from post position two. 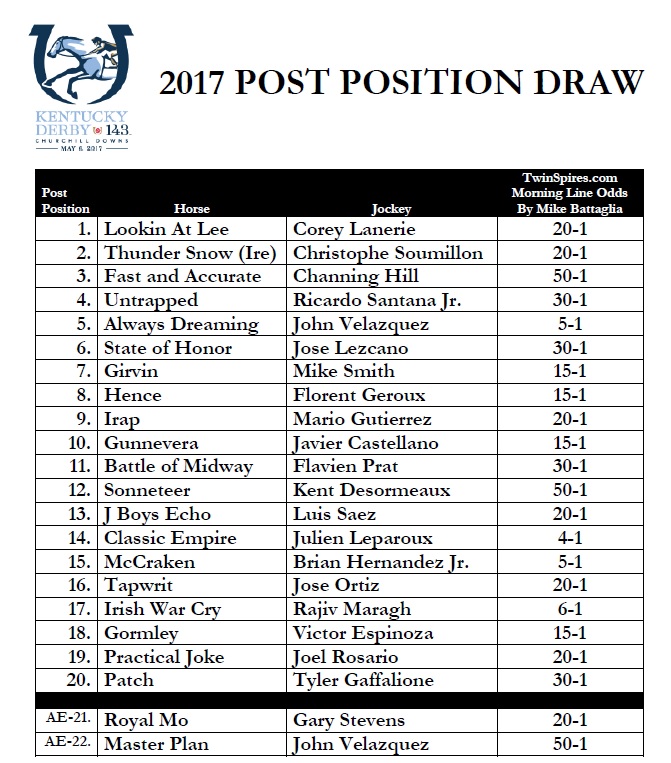