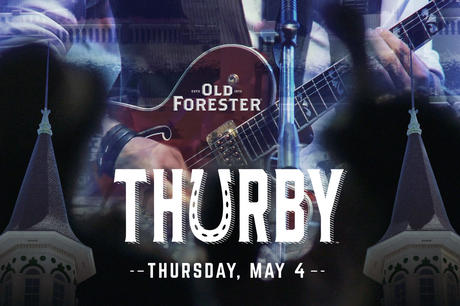 Courtesy Churchill Downs
LOUISVILLE, KY – A generation ago, the day before the Kentucky Derby was regarded as “Louisville’s day at the track,” ahead of the onslaught of revelers from across the world who descended upon Churchill Downs each first Saturday in May.
Yet with the race card on Kentucky Oaks day now attracting Derby-like crowds, the locals have adopted the Thursday before Derby as the day for the hometown audience.
And the racetrack has obliged. In its fourth year, the organic “Thurby” is now an official date on the Derby week calendar, with local music, Kentucky bourbon, and world-class horse racing.

Thurby will also be broadcast live on the NBC Sports Network from 4:00 p.m.–6:00 p.m. Tickets start at $20 and are available at www.kentuckyderbyweek.com.
Thurby 2017 highlights include:
• Homegrown music with DJ Sam Sneed in the Plaza and Louisville Accord, which pairs Louisville musicians from different genres to create completely original works of audio art
• National anthem performed by Louisvillian and former contestant on The Voice, David Moisan
• Thurby signature cocktail Old Thaimer, created by Old Forester 2016 Batch Match Winner Casey Perez
• A contest for the best “julep shuffle,” a new dance by Lady Gaga dancer and Louisvillian Graham Breitenstein to celebrate the Old Forester Mint Julep
• A 2017 Oaks and Derby box giveaway in the Thurby Classic Sweepstakes
Louisville Accord musicians and the original compositions they will perform in locations throughout the track on Thurby include:
• Louisville Orchestra’s Teddy Abrams and Michael Cleveland perform, October
• Alanna Fugate and Danny Flanigan perform Storefront Companion
• Cheyenne Marie Mize
• JD Green and Alex Wright perform Still Life
• Kendra Villiger
• Sydney Sleadd and Mike Hood perform Last Night
• Carly Johnson performs Long Gone
• Tyrone Cotton and Nick Dittmeier perform Endless Roads
Created specifically for Old Forester by Breitenstein, the julep shuffle re-creates the steps of a crafted mint julep through the lens of a pop dancer. Breitenstein will teach the dance on the Plaza Stage and on the Big Board and award Golden Tickets to the dancers who master the dance. The Golden Tickets provide access to the luxury Old Forester Derby Throne, a white-glove restroom in the infield on Oaks and Derby days. Old Forester will also giveaway Derby Like a Local merchandise, host a green carpet at the World’s Largest Mint Julep for photographs next to the julep bar in the Plaza, and provide water on trikes throughout the track.
“Old Thaimer” Recipe
2.5 oz Old Forester Mint Julep
0.5 oz Ginger Liqueur
0.5 oz Lime Juice (store bought)
½ dropper Habanero Shrub
Combine all ingredients in shaker, shake with ice. Pour over fresh ice in glass. Garnish with mint sprig.
Thurby will continue the tradition of giving away a 2017 Oaks and Derby box to one lucky guest in the Thurby Classic Sweepstakes, which takes place before race 10. On-site guests will be invited to enter the contest via text until race nine. Prior to race 10, as many names as there are horses running in race 10 will be randomly drawn from the pool of entrants. Each name drawn will be paired with a single horse running in the race. The person who is paired with race 10’s winning horse will receive a free six-person box to this year’s Oaks and Derby.
Recommended attire for non-dining areas is whatever reflects your Kentucky spirit–from casual to Derby-inspired.