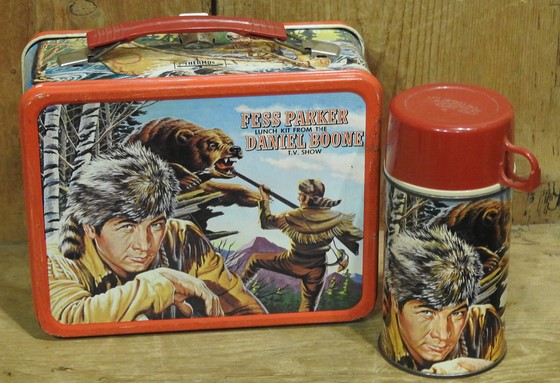 The Daniel Boone Memorabilia Collection represents a lifetime of collecting for Buckberry. The Bowling Green, Kentucky, native collected all things Boone. Realizing his collection had gotten too large to be stored comfortably in his home, Buckberry donated the collection to The Fort Boonesborough Foundation so that it could be enjoyed by Fort visitors.

The pieces range from a limited-edition bust of Daniel Boone to coloring books and lunch boxes from the Fess Parker TV series. Prints, posters, children’s toys, coffee mugs, and other items now line the walls in one of the cabins at the fort. A display case has also been added at the park campground.

An entire generation grew up with Daniel Boone, played by Fess Parker, on television and younger generations continue to learn about Boone. Although the foundation acknowledges that not all the items are correct to the time period, it is still a valuable look at the impact Daniel Boone had on the American public.

Fort Boonesborough was one of the earliest Euro-American settlements in the lands that would become Kentucky. Established by Daniel Boone in 1775, the fort was located along the Kentucky River near the route of the Wilderness Trail from the Cumberland Gap into central Kentucky. The large rectangular fortification was a temporary home and sanctuary to many families who found protection there from British and Indian attacks during the Revolutionary War. After the war ended, settlers attempted to establish a town there but the venture failed and the site was abandoned by 1820. The original fort site, marked with a stone memorial, is preserved in Fort Boonesborough State Park.

The fort is open 9 a.m.–5 p.m., Wednesday through Sunday, April through October. Other cabins feature period-dressed interpreters who can talk with visitors about life in the 18th century. For more information, call (859) 527-3131.