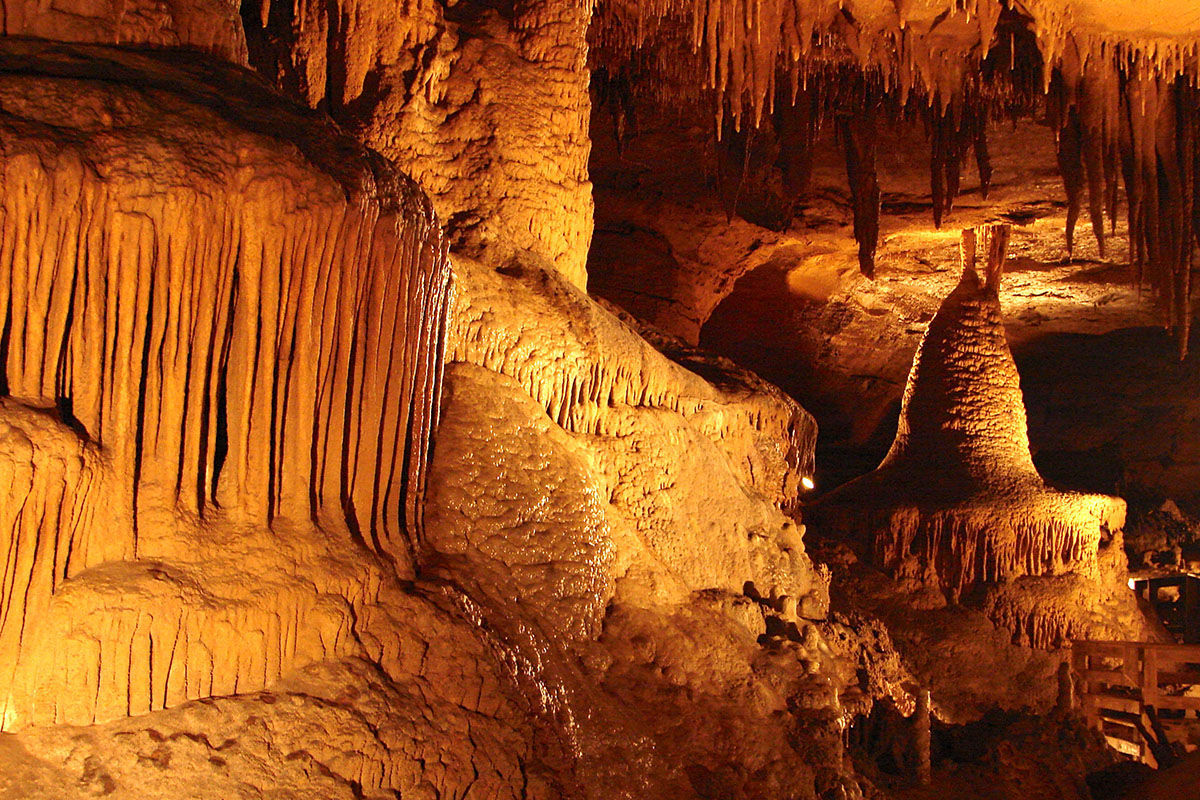 Hart County, mid-August 1950: folks were either wet from the frequent rains or sweatin’ standing still in the heavy air. The weather kept two teenage farm boys, Kenneth Childress and his cousin, Rancel Logsdon, just sitting on the porch with no chores. To alleviate their boredom, the boys took to wandering the countryside in between showers.

On August 18, with lanterns and shovels in hand, the two boys walked to Otter Spring where on an earlier visit they had found a small hole in the side of a hill with a sensational blast of refreshing cold air coming out of it. Now they were determined to enter the unknown and solve the mystery.

They dug their way in and crawled about 220 feet through the narrow passage, emerging into something extraordinary—a massive room laden with formations so beautiful they were beyond description. The boys were dumbfounded with the sudden realization they had discovered a cave of great importance.

In the coming months, explorers concluded that this cave may not be as long as nearby Mammoth, but its awesome beauty would rival any cave in the world. Seeing the financial opportunity, the landowner above the newly named Cub Run Cave opened it for tourism in 1951. But there was a problem. Cub Run Cave ran under two adjoining landowners. A bitter ownership dispute ensued, and in 1952 a judge ruled that the cave was to be permanently closed because there was no answer to the ownership issue.

More than 50 years later, new light would come to the closed, dark cave. Judy and Terry Schneble and their children, Blake, Drew, and Lance, acquired all the land above the cave: no more ownership disputes. Cub Run Cave was finally re-opened to the public in 2006.

Today, walkways and modern lights showcase thousands of stalactites and stalagmites, leaving visitors to ponder the vastness of time it took to form them with each tiny drip of water. The tour continues past crystal-clear pools of water holding blind crayfish, a super-achievement of evolution, and sleeping bats hanging motionless from the ceiling.

After visiting this cave myself, I too am of the opinion that it rivals any cave in the world—and this August is a great time to visit Cub Run Cave, not only to escape the heat but to also remember the contribution two school boys accidentally made to the world, also in August many decades ago.

As I toured the cave, ironically in August a few years back, I listened to a volunteer guide describing the features of the cave. The tall, slim, elderly gentleman with a soft-spoken voice seemed humble yet passionate about what he was showing us, almost as if he had some connection to this place. Indeed, it was Kenneth Childress, still loving the cave more than 60 years after he crawled into the unknown and into history.

For more information on guided tours and the gift shop at Cub Run Cave, visit www.cubruncave.net or call (270) 524-1444.