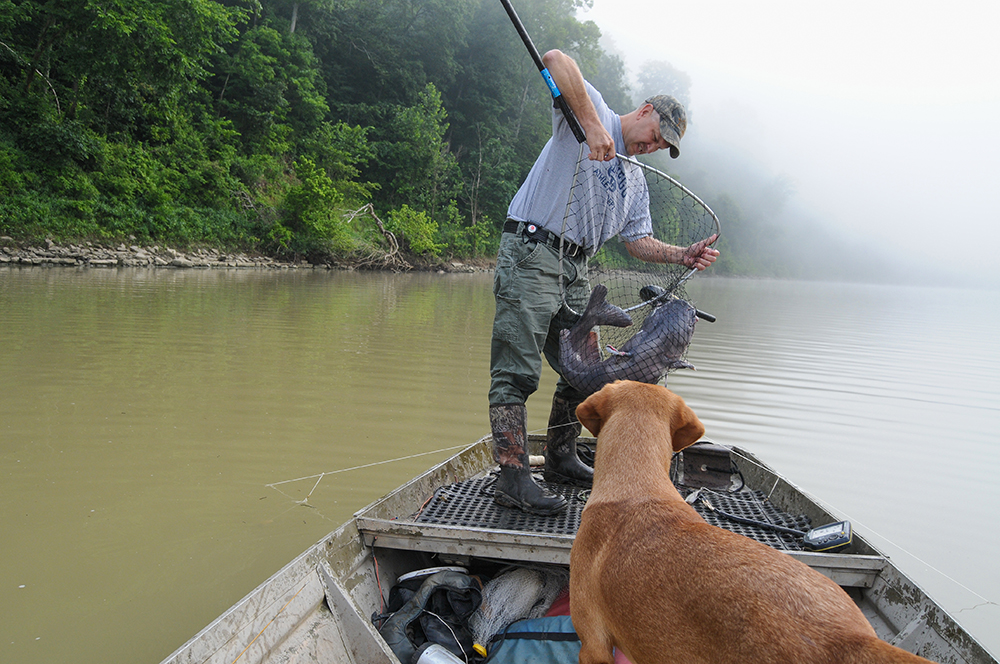 Fisherman and photographer Joe Lacefield shares this self-portrait from a day on the river catching catfish. Lacefield is also a private lands biologist for the Kentucky Department of Fish and Wildlife Resources.

Catfish have been called “the poor man’s fish” or “the lazy man’s fish.”

That’s because you can find a lot of them in almost any body of water and they are relatively easy to catch. Your first successful experience landing a catfish might involve tackle as simple as a pole, a string, a hook and a worm. You don’t even have to be present to win with a baited and weighted trotline stretched between two points, or with jug fishing, which uses a line attached to a plastic jug or a swim noodle.

Catfish also have been called “dinner.” Many, many, many times.

“I like it fried, but sometimes I blacken it, and my wife likes to grill it,” says Joe Lacefield, a private lands biologist for the Kentucky Department of Fish and Wildlife Resources. He lives beside the Kentucky River in the Clifton community in Woodford County. He’s 53, and has been pulling fish from the river since he was a boy. He catches muskie and stripers and sauger and crappie—even buffalo and carp during the summer when everything else is slow.

But his favorite is catfish, “because it puts meat in the freezer and they’re fun to catch.”

So let us consider catfish and the joys of catfish fishing, a pastime enjoyed the world over.

First, catfish are odd animals—fish without scales, but with whiskerlike barbels that inspired their feline name. They come in many sizes, from the tiny cory catfish that keep algae under control in our aquariums to the endangered, adult human-size Mekong giant catfish of Southeast Asia.

Catfish are found on every continent except Antarctica. They usually are fine in their home waters, but can be trouble elsewhere. Consider the walking catfish. It is a Southeast Asian import that escaped from fish farms in south Florida in the early 1960s. It doesn’t really walk; it wiggles, but it can move itself into a pond where other species of fish are being raised, and eat them.

The three species you are likely to catch in Kentucky water are channel catfish, flatheads and blues. The state-record channel cat weighed 32 pounds. The largest flathead was 97 pounds. The state-record blue catfish for Kentucky and Indiana was caught in 1999 between the two states, in the tailwaters of the Cannelton Dam on the Ohio River. It weighed 104 pounds, which also makes it a world record for its line class. It was pulled in by Bruce W. Midkiff, who said he had spent a decade dreaming about a world-record fish. He died two years later at 53. For the last several years, there has been a Bruce Midkiff Memorial Tournament in the same Ohio River pool.  (Check out Kentucky Fish & Wildlife’s Fishing in Neighborhoods program)

State fishing regulations classify the catfish as a “rough fish.” That means with the exception of a relatively few ponds and lakes, and the Ohio River, there is no limit on how many or what size an angler may catch in a day.

You can catch catfish year-round, but the best time of the year for catfish is mid-May, Lacefield says. The second-best is mid-October. From decades of experience, he knows that a rising river brings better fishing than a falling river. And he knows that as summer wears on, anglers are less likely to find catfish on the bottom, because there’s less oxygen there.

There’s been a change in the catfish population in Lacefield’s area of Kentucky since he was a boy. There were no blue catfish there then. In 1997, a state fish hatchery in Franklin County was overrun by floodwaters, and some blue catfish fingerlings escaped. Now he’s catching blues that weigh more than 50 pounds. The state is stocking blues in other places, such as Taylorsville Lake southeast of Louisville and Dewey Lake in eastern Kentucky.

Phillip Crane is a retired conservation officer whose territory covered the upper portion of Taylorsville Lake. A consumer-member of Blue Grass Energy, he lives in Anderson County and still jug fishes the lake for blues, which he thinks are the best-tasting catfish.

“They are a good fish to fight on a rod and reel because I know guys that that’s all they do,” he says.

He’s caught one 50-pound-plus blue this year, and knows of at least two caught by others that weighed more than 60 pounds.

Come and get it

Catfish will bite on a hook baited with a wide variety of things: worms, live or cut-up panfish, or any number of stinky bait concoctions sold commercially. And consider this: A lot of the people you see buying chicken livers at the grocery don’t eat chicken livers. Yep, catfish bait.

Lacefield says he has used soap, especially when the water is clear and gar are stripping other kinds of bait off his hook. Another advantage of soap, he says, is that “you will pretty much catch nothing but blue cats and channel cats on it.”

He has used hot dogs. He has tried grapes. He has melted Velveeta cheese, mixed it with some cattail fiber and added garlic—and it worked. He has even had success crinkling small strips of aluminum foil into the shape of a minnow.

His favorite bait? The green worms, also called sewer worms, that he digs from the loamy soil along riverbanks in the spring. “They have a really strong smell,” he says. “People usually use a rag to wipe their hands because of the slime that gets on their fingers, but they’re fantastic bait.”

In the summer, Lacefield searches catalpa trees for fat catalpa worms, which are caterpillars that turn into sphinx moths. They are 2 or 3 inches long, with tough skin so they stay on a hook well. “When they’re available, they’re hot bait for channel cats,” he says. He uses shad in the fall.

Crane uses green sunfish, bluegill and shad for bait. In his years as a conservation officer, he says he talked to anglers who were using all kinds of things to catch catfish, including hot dogs soaked in Kool-Aid.

Jo Ann Reynolds is a retired Frankfort bank employee who fishes for catfish in the Kentucky River from her houseboat, the Gutentag. She favors cheese hot dogs. Specifically, Oscar Mayer cheese dogs.

“They work better than the plain wieners,” she says. “We probably had some left over one night and decided to use them. I don’t know why they work, but they do.”

Reynolds fishes a lot, both in the Kentucky and on trips to Green River Lake, and releases most of what she catches. But when she keeps catfish, it gets fried.

“We like to just filet them and dip them in Larry the Cable Guy’s beer batter,” she says. “But I don’t like that as much as the Kentucky Kernel seasoned flour. I dip them in egg, then dip them in the flour. That’s the best way.”