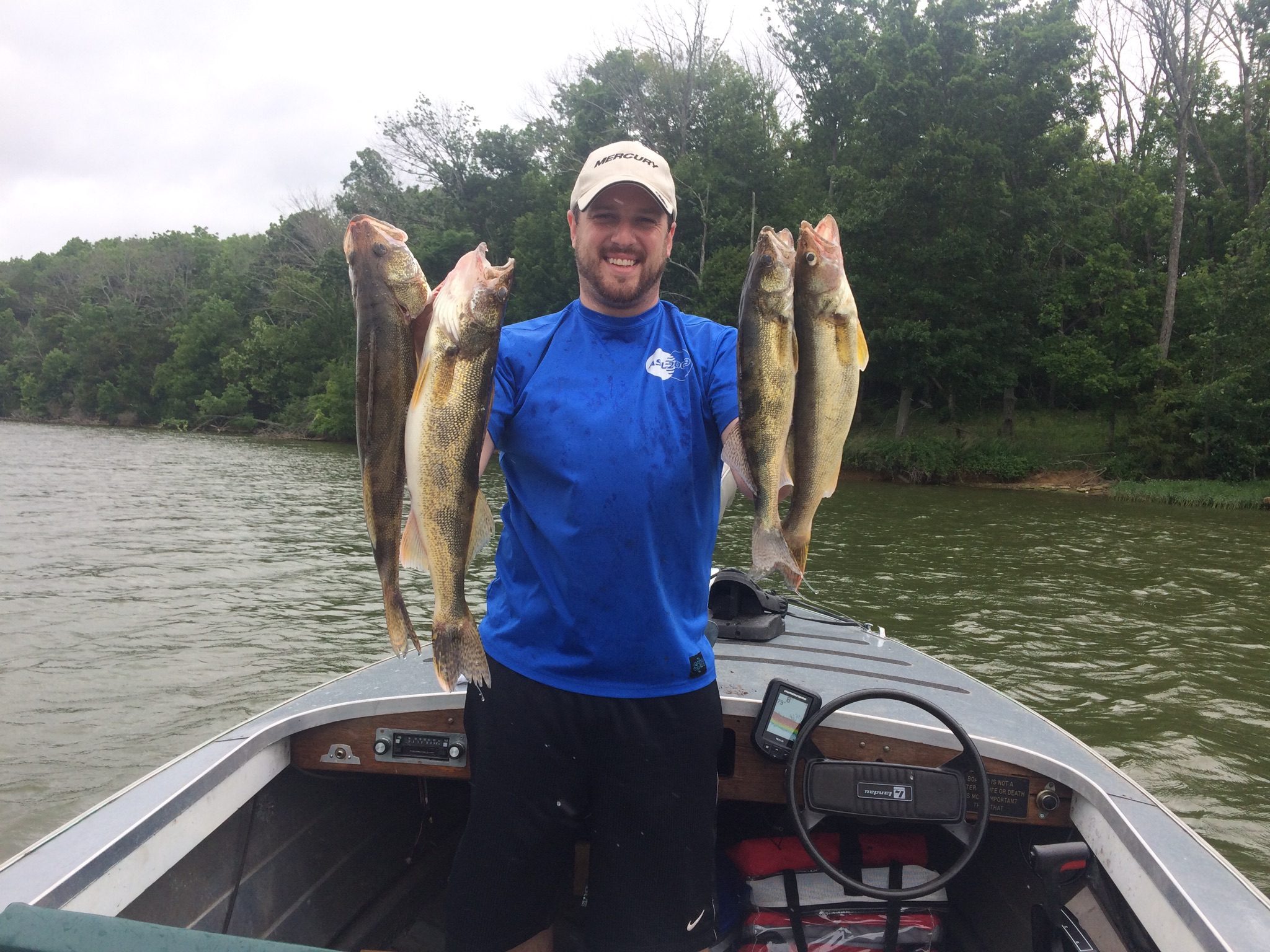 FRANKFORT (July 6, 2017)–With every passing season, anglers are building their knowledge base about how to catch saugeye stocked in a handful of central and northern Kentucky lakes.

A saugeye is a fast-growing cross between a walleye and sauger that can reach 15 to 19 inches in its second year. The hybridization is evident in the species’ physical appearance. Saugeye display the faint saddle markings of a sauger and the white fin tips of a walleye. Unlike either, it features black smudges on its dorsal fin.

Three lakes–317-acre Guist Creek Lake in Shelby County, 148-acre Bullock Pen Lake in Owen County and 175-acre A.J. Jolly Lake in Campbell County–received experimental stockings of the species in 2013 and five have been stocked this year by the Kentucky Department of Fish and Wildlife Resources.

Paul Wilkes and Dane Balsman had never tried fishing for saugeye before they visited Guist Creek Lake one day in late June. They spoke with other anglers and studied bottom contour maps available on Kentucky Fish and Wildlife’s website at fw.ky.gov beforehand.

“We were able to identify some flats that we wanted to hit and then went out and graphed some baitfish near the drop-offs of those flats,” said Wilkes, fisheries program coordinator with Kentucky Fish and Wildlife. “We went out there with a mindset of if we caught one or two we were going to be pumped because this was a new species for us.”

The two reeled in 11 saugeye, including one that weighed 4.5 pounds and two others that weighed better than 3 pounds.

“We went out there and tried it and tried a few different drop-offs we mapped,” Wilkes said. “We stuck to the basics of jigging slowly in the areas we had identified. Strikes were kind of a thud, where you almost thought you were hung up until you really pulled it in. Once we found the fish, it seemed like they were in small schools. You’d catch several.”

Minnow or worm-tipped jigs or small shad-imitating crankbaits are good options for saugeye, as are small suspending jerkbaits or swimbaits in gray and white. Wilkes and Balsman, urban fisheries program coordinator with Kentucky Fish and Wildlife, found bladed jig heads with chartreuse bodies worked best for them.

“If you look at the fishing reports from saugeye lakes in Kentucky and Ohio, you see a lot of reports of anglers finding them in shallow water on crankbaits,” said Hardin, assistant Fisheries Division director with Kentucky Fish and Wildlife. “For a long time, I looked and looked and fished extremely shallow water jigging and picking up the occasional saugeye.

“We pulled off the bank and found wads of baitfish in 8 to 10 feet of water and it was game on. Fish close to the bottom, just like walleye fishing.”

He’s also caught saugeye on Taylorsville Lake. Fisheries biologists believe good saugeye fishing could be in the cards this fall on Salt River above Taylorsville Lake based on population sampling from last fall.

“It seemed like there was definitely a push up there in the river. There’s going to be crappie and saugeye and bass, a little bit of everything,” said David Baker, Central Fisheries District biologist with Kentucky Fish and Wildlife. “Honestly, I think we’re going to be getting a lot of phone calls about saugeye in Taylorsville here in the next year or two.”

This year, the Kentucky Department of Fish and Wildlife Resources stocked more than 150,000 fingerlings in five lakes with Taylorsville Lake receiving more than 115,000 saugeye fingerlings.

“It was a ton of fun and we were able to get on some really nice fish,” Wilkes said. “It definitely exceeded our expectations.”

For more information about saugeye fishing in Kentucky, including special regulations, consult the current Kentucky Fishing and Boating Guide. It is available online at fw.ky.gov and wherever licenses are sold.