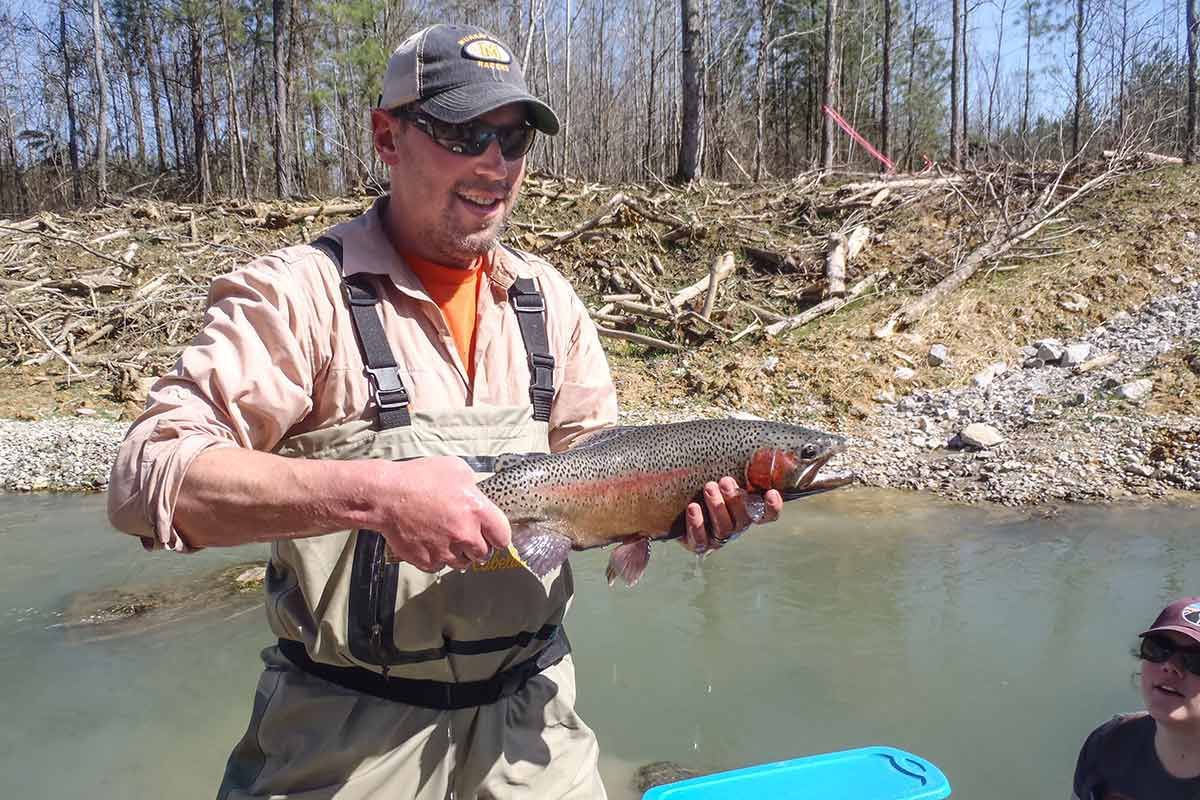 Nature can take millennia to carve the perfect trout stream from the landscape. In Kentucky, it only took contractors 18 months.

Hatchery Creek, a newly built man-made stream that draws its cool waters from the depths of Lake Cumberland, opens for fishing this month.

What was once a stream flowing through a muddy, deep gully in Russell County has been transformed into more than a mile of pristine creek with boulders, gravel bottoms, and wetlands on its flanks.

“Hatchery Creek will not be like fishing in a swimming pool,” says Mike Hardin, assistant director of fisheries for the Kentucky Department of Fish and Wildlife Resources. “There are lots of submerged stumps, logs, and places for fish to hide. It’s full of all the habitat that a fish would want.”

Local residents Larry Gillock and Jeff Powers first proposed rerouting the outflow from the Wolf Creek National Fish Hatchery—where all the trout stocked in Kentucky are raised—from a drainage creek into a specially built meandering stream through the valley below Lake Cumberland’s dam. Their proposal, made more than a decade ago, never gained traction because there wasn’t money to build it.

The idea didn’t die. Years later, officials began considering Hatchery Creek as a Mitigation Fund project. Companies or developers who fill in streams or wetlands can pay into a special fund to mitigate the loss of these areas. Kentucky Fish and Wildlife manages the fund to pay for projects designed to decrease sedimentation flow into streams and rivers—a leading source of habitat loss.

An interagency review team, including the U.S. Fish and Wildlife Service, U.S. Army Corps of Engineers, and Kentucky Division of Water, considered Kentucky Fish and Wildlife’s revised version of the stream plan in 2009. The $1.85 million project would not only significantly reduce the amount of mud flowing into the Cumberland River, but its entire cost would be picked up by the Mitigation Fund.

Biologists and engineers with these agencies partnered with contractors Ecogro, Ridgewater and Stantec. Water first flowed into the new stream in November 2015. Within days, trout from the Cumberland River were already migrating into its waters.

If the design works as planned, trout might be able to reproduce in Hatchery Creek—a rarity in Kentucky. “We built this creek in such a way that trout can spawn, but we won’t know whether they’ll spawn successfully until it actually happens,” says Dave Dreves, Kentucky Fish and Wildlife fisheries assistant director.