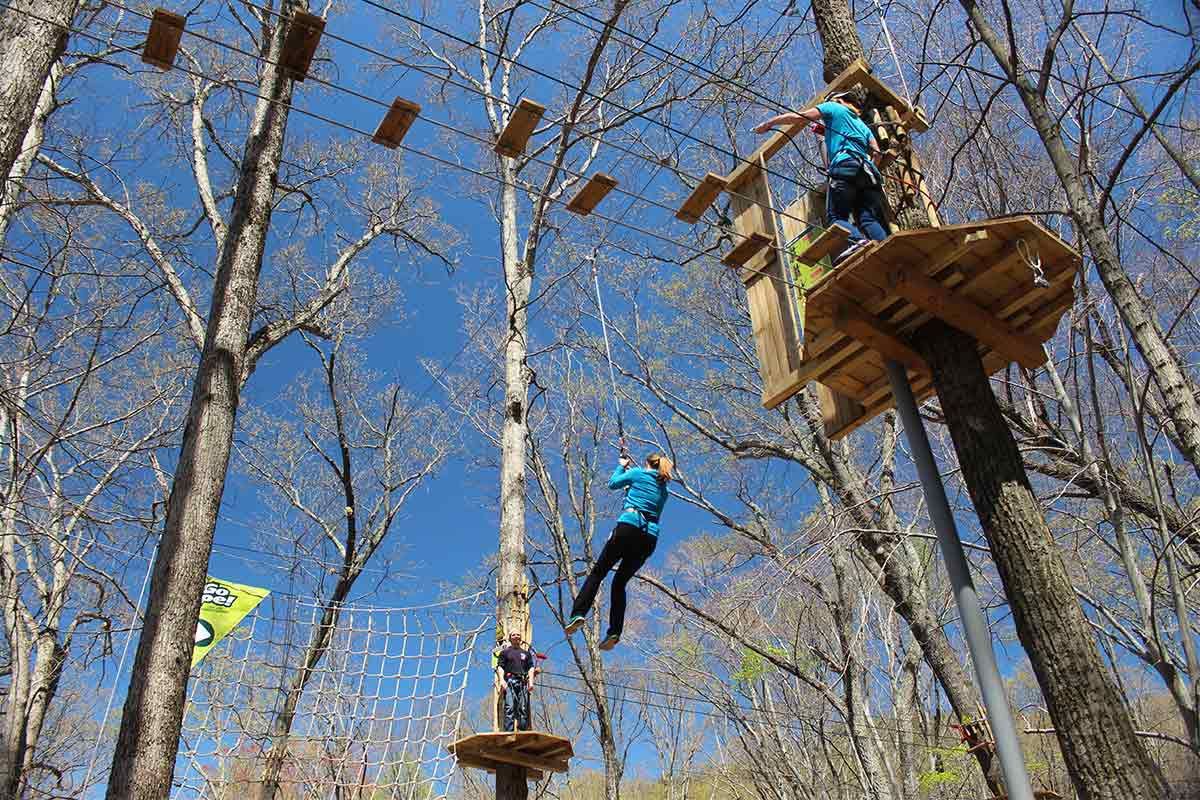 It takes place in the massive, towering trees of an aging second-growth forest. An obstacle course of multiple rope ladders and 39 spine-tingling forest crossings, including the wobbly ladder, a plank crossing with plenty of nerve-racking space between the planks, a log swing, two Tarzan swings, and five breathtaking zip lines, takes challengers from the ground to points higher and higher into the canopy—to a height of 50 feet. Maybe that doesn’t sound that high—until you look down. Even though the course is safe (participants are equipped with safety harnesses and carabiners) and staffed by experienced instructors, adrenaline and survival instincts still kick in and nobody, absolutely nobody, is yawning from boredom.

Go Ape Treetop Adventures is a national company with 14 locations and more on the way—all in forested, publically owned parks. The company is the brainchild of USA Managing Director Dan D’Agostino of Frederick, Maryland. “We saw a niche in that we’re not only offering people an outdoor experience they won’t soon forget, but we’re also helping the nation’s parks by giving them a portion of our revenue,” says D’Agostino.

“You feel as if you’re very far from Louisville. In these magnificent trees it’s almost like you’re on a canopy tour of the Amazon rainforest,” he says. Jefferson Memorial Forest is the largest municipally owned forest in the United States and a designated Audubon Wildlife Sanctuary.
The course takes two to three hours to complete, and it’s open to anyone 10 or over who is at least 55 inches tall, as well as groups interested in confidence and team building. If a participant is uneasy about some of the sections, less challenging routes can be taken or you can go at your own pace and let others pass in front of you. Staff members will also help those who are afraid of heights conquer that phobia.

In just a short time, Louisville’s Go Ape Treetop Adventures has become so popular that advance reservations are recommended throughout the season, which runs from March until December.
So, don’t be afraid. We are primates after all, and before you know it you’ll be swinging and flying through the trees masterfully. Here you can even practice your Tarzan call, which probably needs some work.