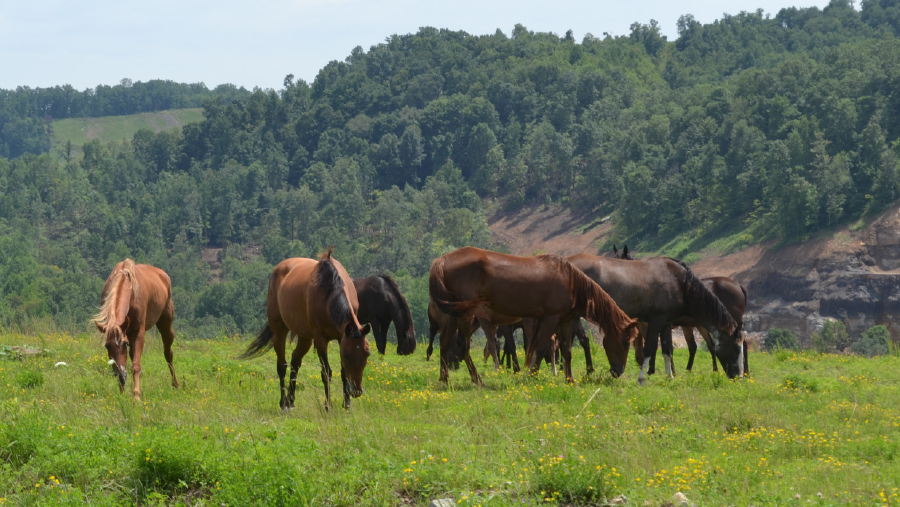 Wild horses have roamed the American West since the Spaniards reintroduced them to this continent in the 16th century. Free-roaming horses also survive in a land far from the Western plains—herds can now be found in the mountains of eastern Kentucky, primarily on reclaimed mine lands.

For decades, farmers turned out their horses for grazing with a gentleman’s agreement not to release stallions. Due to the 2008 recession, some could no longer afford to keep their horses, so they let them go in the mountains, including stallions for the first time. Breeding took place and now feral horses number early 1,000 across five eastern Kentucky counties. Just one of the herds, approaching 400 horses, is on reclaimed mine land in Breathitt County.

“You can even walk up and pet about half of the horses,” says Ginny Grulke, the executive director of the nonprofit Appalachian Horse Project. “But the other half will run away if you get too close, because they were born in the wild and have never interacted with humans.”

AHP, in cooperation with the Breathitt County Horsemen’s Association, maintains the health of the herd, sets out salt blocks and hay in winter, and is planning an effective way to geld free-roaming stallions. AHP will also offer guided horse tours beginning this summer, to help offset the cost of herd maintenance. Imagine riding up a mining or logging road with a camera looking for wild horses.

AHP’s future plans include building a horse center in cooperation with Breathitt County government. The center will include an arena and provide equine education and therapy programs. It will also serve as a temporary holding facility for injured, malnourished or problem horses until they recover or can be adopted out.

The feral horses of eastern Kentucky have become like other wildlife. They fatten up in spring, summer and fall, and lose weight in winter. “We work with the local animal control office to pick up and relocate horses that have come down from the mountaintops and found better winter grazing on the side of the road,” Grulke says.

Along with AHP, several animal welfare organizations are trying to manage and watch over the herds, including the Kentucky Humane Society, which drops off hay and salt blocks at known herd locations. All of the groups, and many area residents, worry about the population getting too big—a danger to the health of the horses and motorists on the road.

On the upside, it’s nice to know you can go on a guided wild horse tour or hike out on a trail and see these majestic creatures—without having to go to Wyoming.