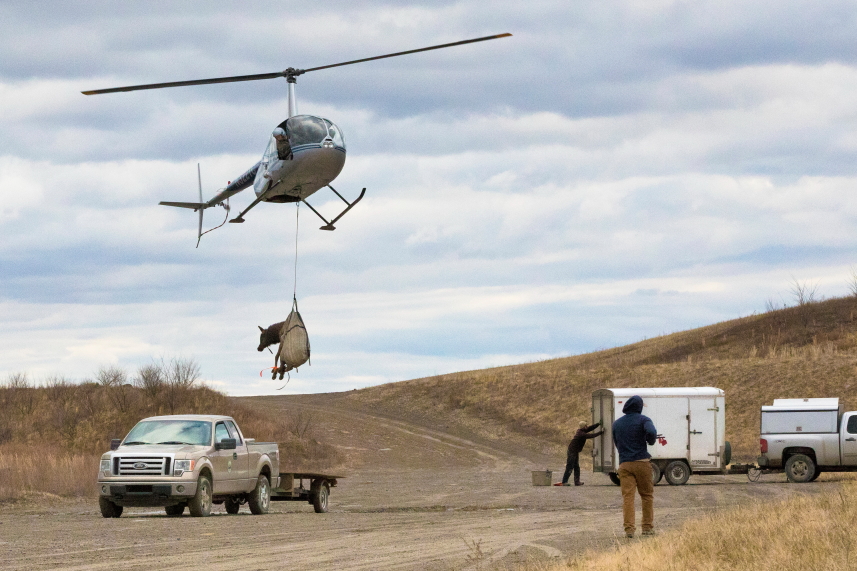 FRANKFORT (Jan. 26, 2018) — Visitors to the Cumberland Gap area of the state soon will experience the majesty of elk in much the same fashion as when Daniel Boone blazed the Wilderness Road.

The elk herd in Bell County is regaining a solid foothold through a partnership between the Kentucky Department of Fish and Wildlife Resources and the Appalachian Wildlife Foundation. The effort involves relocating elk from areas of southeast Kentucky with denser populations to the southern extreme of the 16-county elk zone where fewer animals are present.

“We appreciate the opportunity to work with the Appalachian Wildlife Foundation and others to help create a memorable wildlife viewing experience for residents and visitors to southeastern Kentucky,” Kentucky Fish and Wildlife Commissioner Gregory K. Johnson said. “This project is yet another step in our continuing efforts to broaden the distribution of elk in this part of the state and promote tourism and economic opportunities in eastern Kentucky.”

The department’s recently approved, long-range management plan calls for making it easier for the public to see elk in the wild, but the benefits of a healthy and robust elk herd extend beyond tourism.

The elk released at the proposed site of the Appalachian Wildlife Center near Pineville also will serve as a source herd for future trapping and relocation efforts to increase populations and hunting opportunities in targeted areas of the elk zone and offer excellent research opportunities for the department.

Managing elk in Kentucky sometimes requires moving small numbers from different sites. Traditionally, Kentucky Fish and Wildlife has captured elk with corral traps. In this instance, the Appalachian Wildlife Foundation contracted with a helicopter capture crew that worked with the department using an aerial capture technique familiar in western states but employed for the first time in Kentucky.

The technique is less stressful for the animals. The crew locates a herd of elk, maneuvers to isolate one elk and deploys a net from the helicopter. A crewmember secures and blindfolds the netted animal before placing it in a sling bag. The helicopter then hoists the bag with the elk in it and flies a short distance to a staging area, carefully placing the elk onto a flatbed trailer.

Researchers used the same helicopter technique to capture elk in Utah, Arizona and New Mexico, which were later trucked to eastern Kentucky for the state’s restoration effort from 1997-2002.

In recent weeks, Kentucky Fish and Wildlife biologists transported elk captured in Kentucky by helicopter from the flatbed trailer to a stock trailer parked nearby. Each animal received a tag and health check. Once a small group was collected, the elk were moved by trailer to the unfenced property and released.

Several of the captured elk have been fitted with either GPS collars that download the location of the animal every few hours or VHF radio collars that allow biologists to track the animals with an antenna. The collars will help Kentucky Fish and Wildlife monitor for mortality but also provide important movement data over the coming months and years.

The proposed Appalachian Wildlife Center site spans 19 square miles on a reclaimed strip mine off U.S. 119 that offers stunning views of Cumberland Mountain and surrounding hills. Slated to open in Spring 2020, the center will offer visitors museums, a theater, a hall highlighting the natural history of elk and the species’ restoration in Kentucky, bird natural history and watching, and a 15-mile, self-guided scenic loop road for wildlife viewing, hiking trails and picnic areas.

When it captures elk for relocation, Kentucky Fish and Wildlife is careful to take only a few individuals from any one herd. Department personnel visited sites across nine counties – more than half of the elk zone – and had collected 130 elk through Wednesday for this project. Most have been cow elk but both sexes and all age ranges are represented in the capture data.

“It’s been 20 years since we started returning elk to Kentucky,” said Gabe Jenkins, deer and elk program coordinator with Kentucky Fish and Wildlife. “The number of elk transferred to this location in Bell County is small compared to the total number of elk estimated to be on the ground in the elk zone. It speaks to how far we’ve come that we’re now able to establish a research and source herd while providing the public with a prime location to see these magnificent animals in the wild.”

After receiving public input, Kentucky Fish and Wildlife approved a new elk management plan in 2016. It is designed to serve as a road map for the long-term goals for the management of Kentucky’s elk herd through 2030. Doing what is necessary to provide the public with quality viewing opportunities has been one of the goals since restoration efforts started in 1997. It remains so today and into the future.

The 2015-2030 Kentucky Elk Management Plan is available on the department’s website at fw.ky.gov.