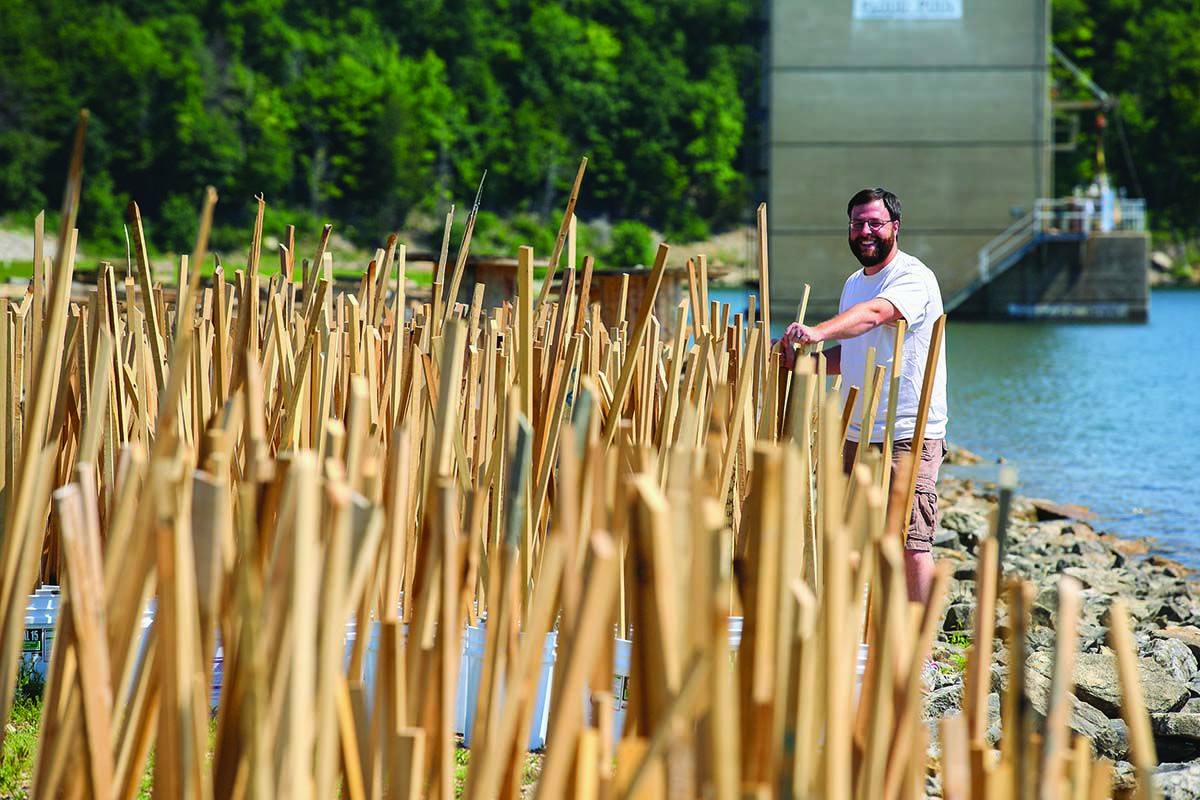 Sections of Cave Run Lake flourished with underwater forests when the U.S. Army Corps of Engineers dammed the Licking River to create the lake, which became operational in 1974. The submerged branches formed canopies where predator and prey fish could thrive.

Much has changed beneath the surface in the ensuing 41 years. “Cave Run Lake still has a lot of timber standing in some areas, but they’ve basically become telephone poles,” notes Northeastern District fisheries biologist Tom Timmermann. “It’s not what it was when it was impounded decades ago.”

Kentucky’s lakes are going bald underneath the waves. “Our reservoirs are aging,” says Kentucky Fisheries Division Director Ron Brooks. “After 40, 50, 60 years, the structure below the surface, such as trees and stumps, breaks down and decomposes.”

Last year, the Kentucky Department of Fish and Wildlife Resources launched a pilot project to add some stubble to the state’s lakes. It began in Cave Run Lake near Morehead.

Employees collected discarded items such as cable spools, wooden pallets, plastic trays, Christmas trees, and plastic buckets to be recycled into new habitat for fish. Local artist Stephen Tyrone brought what is probably the most unusual item ever used for a fish attractor in the state: an unfinished bronze statue to be sunk into the lake.

“He sank the statue so he would know where to find it, then returned a few weeks later to fish it,” Timmermann says. “He caught a muskie off of it.”

Traditionally, fish attractors consist of small brush piles scattered around a lake. What made the Cave Run Lake project different was its scale. Employees, assisted by volunteers, sank two, mile-long sections of fish cover in the lake.

Tossed-out Christmas trees will provide cover for young fish and baitfish. Some of the larger pieces, such as concrete blocks and cable spools, provide hiding spots for larger predators, including bass and muskies. Algae growing on this new cover will give invertebrate creatures a source of food—and provide a food source for younger fish.

“From what the anglers are telling us, fish moved onto this cover a lot quicker than we thought they would,” Timmermann says. “Everything we’ve heard so far has been positive.”

Cave Run Lake will receive several miles of new fish habitat in the coming years. Eventually, Brooks wants to expand the program to major lakes elsewhere in the state, especially in eastern Kentucky.

“The lakes all have good fisheries,” Brooks says. “It’s just that fish are not always easily accessible. This kind of habitat work will make it easier for anglers to find the fish.”

Insider Tips
Keep up with the latest news from the Kentucky Department of Fish and Wildlife Resources on Twitter at www.twitter.com/kyafield.