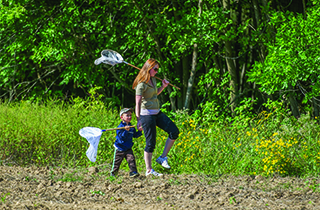 Little did I know how critically important lowly milkweed plants are to the balance of nature back when I was weed whacking them down at every opportunity.

Monarch caterpillars—the larval stage of the spectacular monarch butterfly—feed on the leaves of the milkweed species as its sole food source, especially the common milkweed, Asclepias syriaca.

Most folks, including me, thought the milkweed was just that—a weed. We destroyed so many with herbicides, weed cutters, and bulldozers that they are harder to find than before. That means the monarch butterfly is on the decline as well, and alarmingly so.

In 2012 alone, the monarch population declined 59 percent from the year before and 2013 brought more disturbing statistics. Many scientists fear the orange-and-black butterflies may go extinct without the help of a lot of people, from backyard gardeners to farmers and ranchers.

“The monarch butterfly has one of the most unique migration events in all the animal kingdom,” says Ellis Laudermilk, invertebrate biologist for the Kentucky State Nature Preserves Commission. “This little butterfly somehow manages to fly some 3,000 miles from southern Canada and the Eastern U.S. all the way to Mexico to overwinter, and then begin the journey back north in the spring to produce the next generation of monarchs. It would be a tragedy to lose them.”

Three generations of monarchs emerge every spring and summer, each living just two to six weeks. In its fourth generation during August and September, while biologically the same as the other three generations, monarchs live eight months longer and make the flight to Mexico, leaving scientists scratching their heads to figure out how they do it.

The monarch is also important as a pollinator. “This is leading us down a path we don’t want to go,” Laudermilk says. “Without the ecological services of pollinators like butterflies, moths, and bees, crop yields would go down, which in turn would affect our own food supply.”

National and international organizations such as The World Wildlife Fund, Monarch Watch, Wild Ones, and, closer to home, The Garden Club of Kentucky, are asking people to create monarch “waystations.” These are butterfly gardens that provide essential milkweeds and nectar plants for monarchs, as well as habitat and shelter for other butterflies and pollinators. The Garden Club is also encouraging folks to get waystation certification through MonarchWatch.org by going to the group’s Web site and following the links.

Even the leaders of nations have expressed concern over the plight of the monarch. In February 2014, U.S. President Barack Obama, Mexico President Enrique Peña Nieto, and Prime Minister Stephen Harper of Canada met and discussed ways to preserve the monarch migration.

It’s a lot of commotion over a little butterfly. But perhaps we should have made the same fuss over the passenger pigeon and all too many other species that are now gone forever.

For more information on how you can help save the monarch butterfly, go online to www.gardenclubky.org, www.monarchwatch.org, or www.wildones.org.