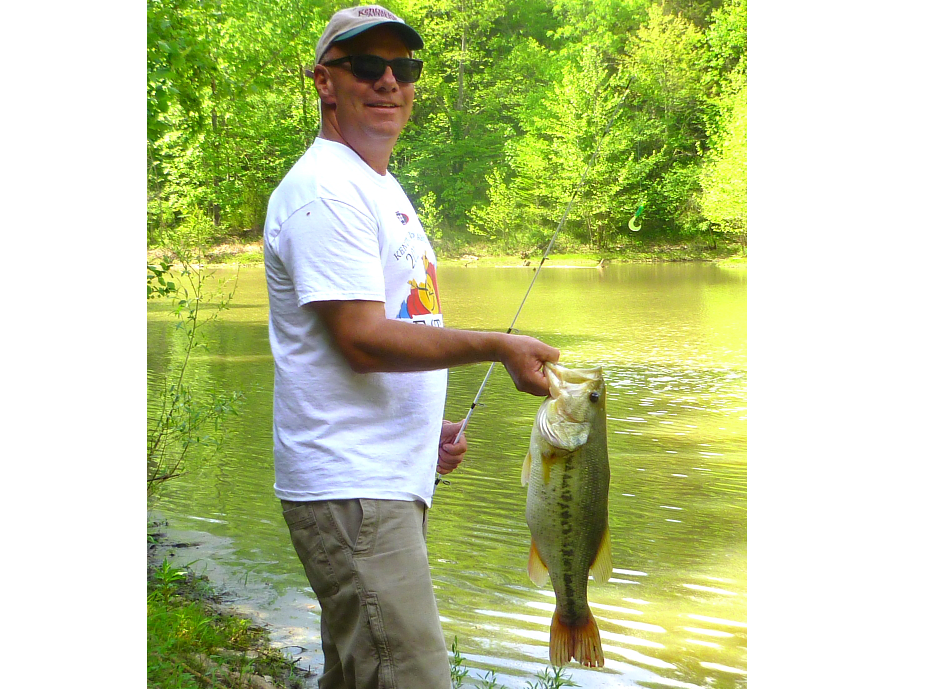 FRANKFORT (June 1, 2017) – June is one of the best months for outside activities such as fishing. However, many predator species, such as largemouth bass, have already completed their annual reproductive ritual and kind of sulk through June.

It can be a tough month for fishing in lakes and reservoirs, but two options will produce fishing that compares to the marvelous weather.

June is a transitional month for largemouth bass in our larger lakes, but the confined nature of a farm pond ups the odds in the angler’s favor.

“You can catch largemouth bass all summer in a farm pond,” said Jeff Ross, assistant director of fisheries for the Kentucky Department of Fish and Wildlife Resources.

Successful summer largemouth bass fishing in farm ponds is all about timing and changing approaches as the day progresses. Wake up early enough that dew soaks your shoes as you walk to the pond.

Old-school topwater lures such as the Hula Popper or a Jitterbug in the bullfrog color draw vicious strikes when slowly worked along the edge of vegetation in the low light of early morning.

As the sun rises, switch to fishing a weightless 7-inch ribbon-tailed worm in the junebug color. “Bass hold tight to cover during the middle of the day on a farm pond,” Ross said. “Fish the shady side of the pond if there is one.”

The weightless ribbon-tailed worm slowly falls through the cover attracting largemouth bass snuggled deeply in it. If the pond has no cover, fish the worm slowly along any weedlines or under any floating vegetation.

As day fades into night, the topwater bite again comes into play. Anglers also catch many farm pond bass in the dark on a 1/4-ounce black spinnerbait with a round Colorado blade.

Fish the spinnerbait just above bottom and let the Colorado blade thump. Hold on tight as largemouth bass often savage this presentation.

Channel catfish spawn in Kentucky mainly in June. “They are cavity spawners,” Ross said. “You often find them near riprap or chunk rock.”

Riprap consists of cantaloupe-sized rock used to protect the face of dams, bridge abutments, and marinas from erosion caused by the pounding of waves. A 3/8-ounce slip-sinker rig with a 4/0 circle hook is a good choice for catfish when fished on or near riprap or areas of chunk rock lining the banks.

A slip-sinker rig consists of an 18-inch fluorocarbon or monofilament leader with the circle hook on one end. Tie the other end of the leader to a barrel swivel. After threading the main line coming from your rod through an egg sinker followed by a glass bead, tie the main line to the open loop of the barrel swivel.

A circle hook prevents gut hooking catfish. Resist the temptation to set the hook, simply reel in slack line until you feel the catfish swimming and keep your rod tip high. The catfish will hook itself in the side of the mouth with a circle hook.

Ross also said any cavity near a root wad or stump also holds channel catfish in June on our lakes and reservoirs.

The many creeks coursing through Kentucky hold surprising numbers of channel catfish. Those with rocky bottoms and water at least chest deep are best.

Undercut banks are key to finding channel catfish in streams. Use a slip-sinker rig with enough weight to hold it in place in current. Use a 3/0 circle hook with a piece of cleaning sponge impaled on it.

Drop the sponge into a tub of commercially made stink bait, also called dip bait, and push it to the bottom with a stick. Hold it there to soak up as much of the smelly dip bait as the sponge can hold and cast it to an undercut bank. The sponge emits a plume of funk downstream that channel catfish follow back to the sponge and eat it.

You can also use chicken livers, nightcrawlers, or rancid cheese for this presentation, but the dip bait sponge is hard to beat in a stream. You will catch many 16- to 21-inch long channel catfish in streams, perfect size for a dinner. Channel catfish from a cool stream offer fantastic table fare.

June is a wonderful month weather-wise, but a transition time as predator fish move into their summer locations. Farm pond largemouth bass and channel catfish provide excellent sport during this unpredictable month.