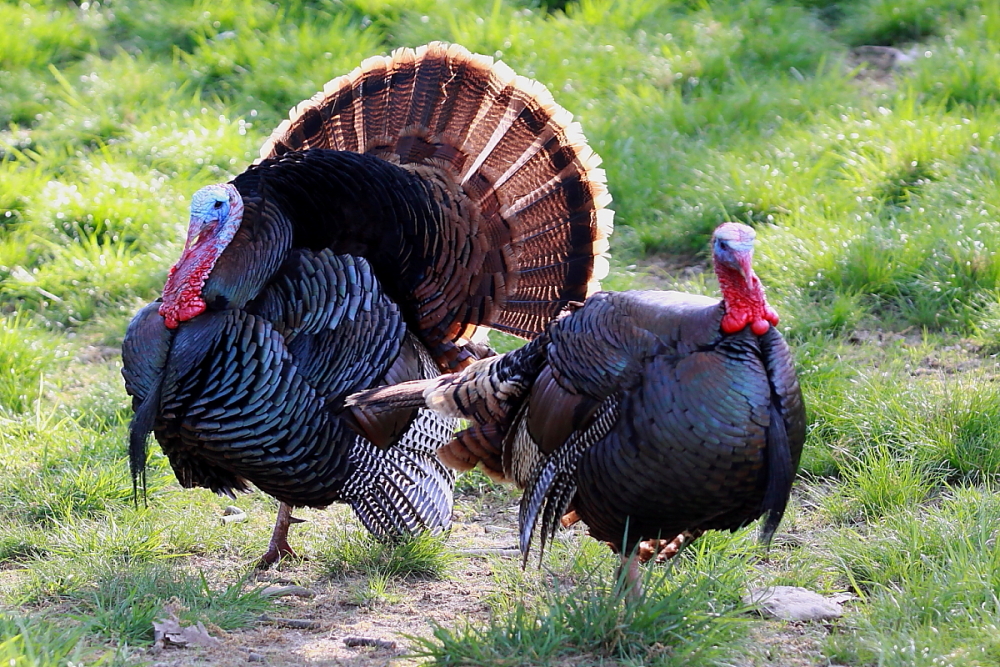 FRANKFORT (March 23, 2017)–Spring turkey hunting is slipping into position before daybreak and sitting still as the sun eases over the hills.

It is breaking the silence with a call and getting a response that sends a shock of excitement down your spine. It is coaxing a love-struck gobbler closer and keeping your wits as it struts into range.

“There’s something about that drumming, spitting, gobbling turkey in front of you that makes the ground shake,” said Jason Lupardus, Midwest Conservation field supervisor with the National Wild Turkey Federation who has regional biologist duties in Kentucky. “I live for those moments. Favorite time of year, by far. You can’t beat it.”

The spring turkey season is something of an obsession among hunters who have experienced those magical mornings many times over or dream about it happening their first time out this year.

In Kentucky, the 2017 season is right around the corner. Hunters ages 15 and younger are first up. The youth-only season is the weekend of April 1-2. The general statewide season opens April 15 and runs through May 7.

The state’s turkey flock numbered fewer than 2,400 birds when restoration efforts began in 1978. The restoration continued until 1997, and today turkeys can be found in all 120 counties. The statewide turkey flock is estimated from 200,000 to 240,000.

A wet spring and early summer affected nest success and brood survival in 2016. The number of turkey poults per hen averaged 1.6 across the state, down from 2.3 the year before. What that means for this spring is fewer jakes but a strong crop of older, more experienced gobblers.

“We should have plenty of 2-year-old birds out there gobbling and providing good opportunity for folks,” Danks said. “I’m pretty excited about it. Of course, we’re going to cross our fingers and hope for good weather. The early season weather really impacts things. If we get good weather, people will get out and should have some good action.”

Lupardus is even more bullish about the upcoming season.

“We may have our banner year,” he said. “There were reports last spring of lots of jakes running around. That tells me that banner production from two years ago was still in place. Therefore, we should have a lot of 2-year-old birds out there gobbling this year. I’m thinking this could be our 10-year high.”

Kentucky’s spring turkey harvest has remained stable since the 2010 season when hunters took a record 36,097 birds.

Kentucky times its spring season to give gobblers ample opportunity to breed hens before subjecting them to hunting pressure. The mild winter and subsequent early green up this year has ramped up anticipation.

“I’m sure people have been seeing a lot of birds strutting, hearing some gobbling, and that may have them wondering why we don’t start hunting them sooner like some other states,” Danks said. “But we really feel like we have a good handle on our season. We’re trying to strike a balance between hunting opportunity and protecting the resources.”

A strong mast crop this past fall combined with the mild winter should translate into hens being in tip-top physical condition for the breeding season.

“Which hopefully could bode well for their clutch sizes,” Danks said. “When hens are in better condition, they lay better eggs with more yolk reserves and hopefully that leads to better poults. We would like to think that we’re coming into a really good spring in that respect.”

Hunters are allowed a limit of two bearded birds during the spring season. Any combination of male turkeys, or female turkeys with visible beards, may be included in the season limit. No more than one bird may be taken per day.

While many hunters focus their efforts on the early season and early morning hours, Bo Spencer does not overlook the mid-morning and late-season opportunities.

“I tend to really like mid to late mornings and the second half of our spring season,” said Spencer, who works in Kentucky Fish and Wildlife’s Information Center and is an avid turkey hunter. “The first week or two of the spring season, hens are roosting with and staying with gobblers until mid-morning. After about 9:30 or so, the hens have left the gobblers. Often times this will result in a gobbler becoming more willing to answer and come to calls.”

He continued: “The second half of our spring season, hens are on the nest and those gobblers are still in breeding mode. Late-season birds can be more willing to work to calls. They might not be as vocal and gobble as much as pre-season and early season but they will come looking. These late-season birds can come in quietly and all of the sudden there is a gobbler in range that you didn’t know was even in the area.”

Hunters are encouraged to consult the 2017 Kentucky Spring Hunting Guide before the season or going afield. The guide provides information about current regulations, licenses and permits, legal equipment, safety tips, and more. It is available online at fw.ky.gov and wherever licenses are sold.

Kentucky Fish and Wildlife helps take the worry out of finding a place to hunt. It owns, leases, or manages more than 80 public hunting areas across the state, and all but a few are open under statewide hunting regulations for the spring turkey season. These exceptions are noted in the guide. A complete listing of public hunting areas can be found on the department’s website.

Be sure to tune in to Kentucky Educational Television (KET) on Saturday, March 25 for a special Kentucky Afield TV half-hour call-in show focusing on the spring turkey season. The live show airs at 8:30 p.m. Eastern/7:30 p.m. Central.

Danks and a representative from Kentucky Fish and Wildlife’s Law Enforcement Division will join host Chad Miles to field phone calls from hunters across the state.