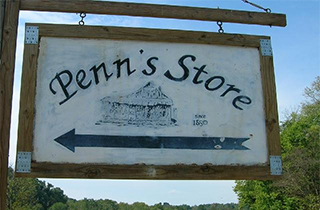 The May 2014 Kentucky Living Worth The Trip column, Selling nostalgia, did not include Historic Penn’s Store. Penn’s Store, located outside Gravel Switch, is the oldest country store in America in continuous ownership and operation by the same family. It has been a store site since 1845, and in the Penn family since 1850. It is on the National Register of Historic Places, a Kentucky Centennial Business, and a Kentucky Historic Site.

A major flood in 2010 temporarily closed the store for cleanup and repairs. The store has resumed weekend operations and hosts its annual Kentucky Writer’s Day Celebration, which, by the way, is celebrated each April 24, the birthday of Robert Penn Warren, who is related to the Penns of Penn’s Store.