First responders give their time to give others life

John May began his descent into Red River Gorge expecting to find a body.

He gripped the rope that was lowering him down a sheer cliff. He scanned the ground below for a 20-year-old man in a black T-shirt who had fallen from a cliffside cave about 170 feet up.

May is manager of Administrative Services for Licking Valley RECC, but on this day in 2010, he was working in his capacity as a member of the all-volunteer Wolfe County Search and Rescue Team. 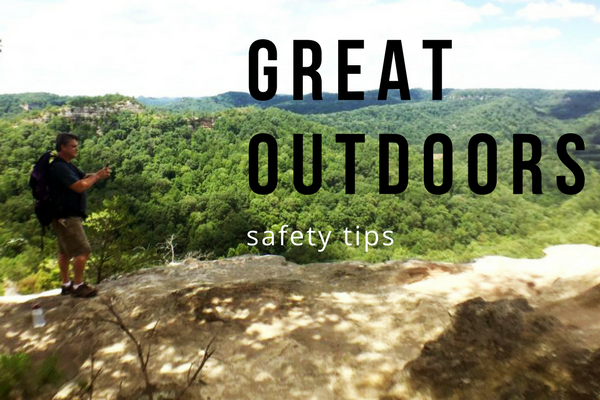 One of his favorite memories of his 14 years of rescue work is discovering that, somehow, the young man crumpled on an incline had a pulse.

“I couldn’t believe it,” he says. May radioed up with a new sense of urgency because the operation now was a rescue instead of a recovery. That young man is alive today.

Talk to Kentucky’s fire and rescue volunteers and you’ll find that while this story is dramatic, it is not unique. These are people who are willing to spend their free time risking their lives to help strangers in times of urgent need.

Emergency responders, particularly in rural Kentucky, are likely to be volunteers. According to the Kentucky Fire Commission, just over 14,000 of the state’s 18,000-plus firefighters are volunteers. Outside of cities, relatively few local governments have the resources to support a paid, round-the-clock fire department. And fire departments respond to emergencies that include floods, car wrecks, and, in at least one case, an injured man stuck high in a tree.

Billy Womble heard this particular call on the fire department scanner on Memorial Day last year. Womble has 15 years’ experience with the volunteer fire department in Melber on the Graves-McCracken county line. When he reached the scene, he saw that a tree cutter had been injured while chainsawing the upper branches of a tree.

The man, Womble says, looked to be unconscious and was delicately balanced on a broken branch “maybe 40 feet in the air.”

A lineman with Jackson Purchase Energy Cooperative in Paducah, Womble shinnied up and fastened the man and himself to the tree, while another first responder, Danny Thurston, who had arrived at the same time, called for additional help.

“I’m talking to him, trying to get a response,” Womble says. “He just kept saying, ‘I need a cigarette. I need a cigarette.’” Womble couldn’t oblige, but held the man securely in place until paramedics arrived with ladders long enough to reach them. Womble since has had no contact with the man he rushed up a tree to help. In fact, he says, “His back was to me the whole time. I never really saw his face.”

Too close to home

Ricky Fletcher is a lineman with South Kentucky RECC who’s spent 25 years as a volunteer firefighter in Burkesville. He prides himself on being able to stay focused in any circumstance. “I block my emotions out and do the job at hand. Some guys, if there’s a bad wreck, if there’s kids involved, they can’t do it.”

About 18 years ago, Fletcher arrived on the scene of a highway accident—inside
the mangled car, a man, woman, and child were all seriously injured. Fletcher helped cut open the car, and then he and other rescuers formed a human chain to carry the battered, bloodied, and unconscious passengers up the embankment to safety. Fletcher found the woman’s purse and checked for ID so they could contact her family.

When he saw the driver’s license, “I went into panic mode,” he says. He had just helped rescue his own sister. “I’d looked her in the face and had no idea it was her.”

Fletcher’s sister, brother-in-law, and nephew all made a full recovery. “We’re a close family and it just made us closer,” he says.

The painful incident didn’t complicate Fletcher’s feelings about answering another of the 70 or so emergency calls he responds to every year. “The more I do it, the more I feel I was put on this earth to do this,” he says.

The sense of mission and purpose is key to why many people become fire and rescue volunteers. University of Kentucky psychology professor Nathan DeWall says, “People who are searching for me

aning tend to not be very happy. People who have a strong sense of meaning and purpose tend to be happy, healthy, and helpful.”
Still, the work of a fire and rescue volunteer can take its toll. The images of bodies can linger. A volunteer’s sudden and unpredictable absences can lead his or her loved ones to develop a complicated mix of feelings like pride, worry, and frustration.

Plus, these volunteer jobs require hard work. The more active members of the Wolfe County Rescue Squad, for example, might each log over 100 hours a year in training on ropes, swift-water rescue, and more. Volunteer firefighters have similar requirements.

That’s a lot of hours for work that generally doesn’t pay beyond, in some cases, the $25 or so per call that a few volunteer fire and rescue operations can offer for life-risking work. Some can’t even afford that meager compensation.

Tim Carter still walks with a limp. He knows it’s a small price to pay for the 170-foot fall that should have killed him. From his home in Florida, he says his survival mystifies him as much as anyone and he finds himself searching for meaning. “Is it just good, dumb luck?” he asks.

In 2013, Carter and his mother returned to Kentucky so he could finally meet and thank the members of the Wolfe County Search and Rescue Team. “It was like meeting a celebrity,” Carter, now 27, says. “Like, ‘Oh, my God, it’s you.’”

May, one of his rescuers, says it’s rare and gratifying when someone comes back to say thank you. He also believes Carter is alive for a reason and maybe someday they’ll know what it is, but in the meantime, there’s no question of earning or owing. “I’m just happy Tim gets to live his life. He doesn’t owe us a thing,” May says.

“Sometimes I wonder if I’m doing enough with my life to earn what they did for me,” Carter says. “That’s why I’m back in school, to try to better myself so I can maybe do something to help other people.”

During their 2013 visit, Carter and May posed for few pictures from the very spot where Carter had fallen three years earlier. In one picture, the two are standing inches from the edge and May holds Carter by the arm to keep him from getting too close.

“Thanks,” Carter said, “wouldn’t want you to have to come get me again.”