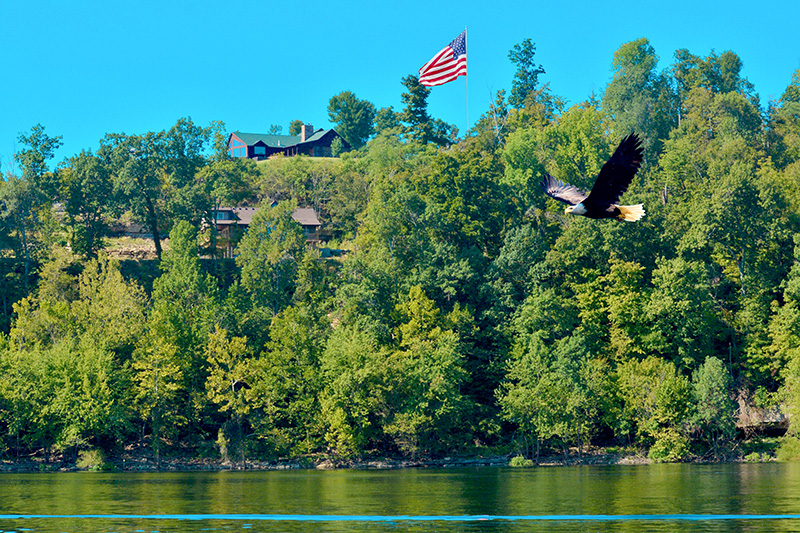 When talking about Rough River Lake, a scenic stretch of paradise in Falls of Rough, and the substantial list of enhancements and improvements made over the past dozen years, Charlie Corbett can neither hide nor contain his enthusiasm.

The president of the Friends of Rough River Lake helped bring this 5,100-acre reservoir and recreational hub spread across Breckinridge, Grayson and Hardin counties back to life after the fireworks show—a major draw to the area—was defunded by the state in 2006.

Now, the Friends of Rough River Lake raises funds to pay for the event, which is just one of the positive changes that the lake has seen in recent years. Among the others were moving a marina; remodeling a building used as a visitor center; creating a new public beach, picnic shelters and blueway trails; adding a half-dozen new events to the calendar; and more. A few years ago, Rough River Business & Tourism, also headed by Corbett, convinced the U.S. Army Corps of Engineers, which manages the lake, to keep it at summer pool level through much of October.

The result of all this? Rough River Lake extended its tourism season by 40 days and is now considered one of Kentucky’s favorite warm-weather playgrounds.

“I love this lake,” says Corbett, a builder and real estate agent who also spent eight years in the United States Navy Submarine Forces Atlantic Fleet. “Four generations of Corbetts have been on this lake. I’ve been on this lake since 1965 and have never missed a summer.”

In the past five or so years, the Friends worked to raise funds for construction of  a new beach/swim area at Laurel Branch Campground, picnic shelters at the North Fork and Cave Creek campgrounds and blueway trails for kayaking and canoeing. Campgrounds are operated by the Corps; a private marina and boat dock also hug the lakeshore, in addition to the state park facilities.

Besides those improvements, water/electric hookups were added to about 100 campsites. A marina was moved to a deep-water spot adjacent to the state park lodge—a feat that was three years in the making with the help of state funds, which also paid for upgrades to the airport at the state park.

“It’s obvious when people get here that the community thoroughly supports the recreational activities of the lake,” says Corbett. Friends of Rough River Lake  doesn’t receive any state or federal funding: “All funding is generated locally by the business owners and the people in the local area,” he adds.

Acting as a beacon to fun seekers is an illuminated 1,500-square-foot American flag perched atop the bluff overlooking the lake at Patriot’s Pointe. It flies continuously day and night and is visible for miles. Keeping lake life lively are six annual events that kick off in mid-March with the Ceremonial Filling of the Lake.

“This event is dedicated to educating kids of all ages about how the Rough River Lake flood control project actually works and features a tour of the dam control tower guided by the U.S. Army Corps of Engineers,” says Corbett.

The season concludes with a Lakeshore Clean-up the weekend after Labor Day. In between are several events, including the biggie—the Rumble over Rough fireworks show, held the closest Saturday on or before the Fourth of July. In 2018, a carnival midway was added.

“Last year we had the highest attendance ever recorded by the state park—with approximately 45,000 at the park, not counting a bay full of boaters, campers and neighborhood spectators,” says Corbett. “All in all, we had about 60,000 attendees.”

Currently in the works is a new picnic shelter at Laurel Branch Campground and the construction of the Cave Creek Mountain Bike Trail. The Friends group is also looking at raising funds for additional fall activities like picnic festivities and foliage peeping tours.

With near-summer pool level at the lake extended through the third week of October, the season now encompasses prime fall foliage time.

Because of expanded lake activity, the area has become a wedding destination. According to Rough River Dam State Resort Park Manager Michael Ricks, about 20 weddings are held at the park annually.

In 2018, Rough River Lake found itself starring in an episode of HGTV’s Lakefront Bargain Hunt.

“HGTV Googled ‘lakes’ and we came up on multiple tourism and real estate sites,” says Corbett. “That’s how they found us—and that’s when we found out the Rough River Lake’s Independence Day celebration was designated the ‘No. 1 Fireworks Show in Kentucky for Family Fun’ by Southern Living.”

It was icing on the cake for an inexhaustible group of Friends who love life on the lake and want to share it with others.