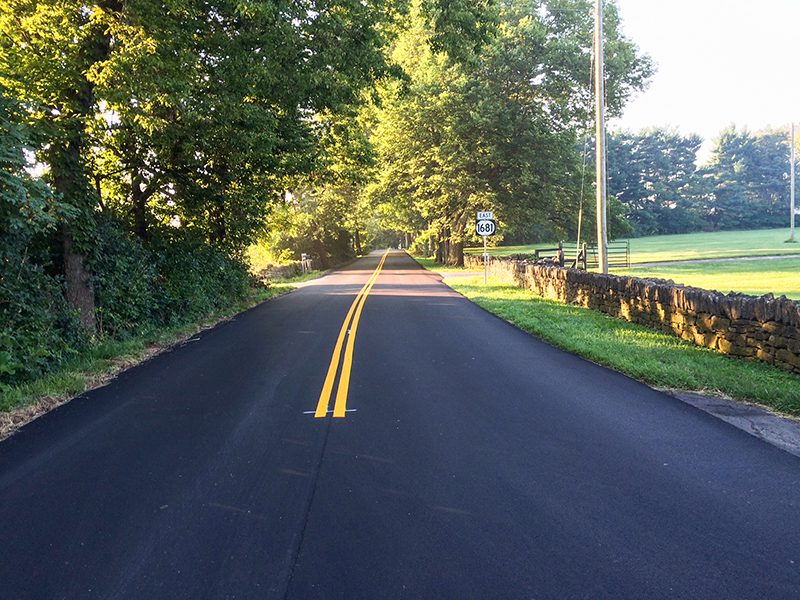 Cycling in the Bluegrass on country roads like Old Frankfort Pike is beautiful and peaceful. Photo: Rob Moore

Hitting the trails is heaven on wheels

Kentuckians who are choosing pedal power for exercise, competitions, bike-touring vacations or just plain fun have their pick of beautiful and diverse areas to bike ride in Kentucky. From flat, paved trails to country roads with challenging hills, the commonwealth offers thousands of miles for bicycle enthusiasts to enjoy.

A feeling of freedom

Pam Thomas, president of the Bluegrass Cycling Club, has ridden in many states, and even in New York City when she lived there in the 1980s. She says she loves riding in Kentucky.

“Kentucky is beautiful—one of the best places to ride a bike. The roads are well-paved, many have light traffic, and for the most part, drivers are respectful,” she says.

Thomas, who is involved in many cycling-related activities, says she enjoys the freedom of bicycling, “and the ability to cover a lot of miles. I like the social aspects of a group when I’m with one and the solitude when I’m alone.”

Troy Hearn, coordinator of the state Transportation Cabinet’s Bicycle and Pedestrian Program, echoes Thomas. “The main thing I love is the simplicity and freedom of riding the bike as fast and as far as your body can carry you,” says Hearn, who has loved bicycles and everything associated with them since he got his first bike at age 4.

Tom Hellmann says he became intrigued with cycling as an adult when his youngest brother and a friend decided on a lark to ride from northern Kentucky to Lexington. “I was in law school at the time. I thought that was pretty cool… After law school I moved to Frankfort and decided to buy a bike to take advantage of the many riding opportunities in the area,” he says. Hellmann has logged more than 150,000 miles since 1995.

Even though he is goal-driven, Hellmann still appreciates the beauty and freedom of his rides. He describes his favorite time to ride, on a warm weekend morning:

“The sun is out, the wind is calm, the roads are empty, and I’m just pedaling my bike past horse farms that might have a light fog in the low-lying areas of pastures. Occasionally, if there’s a group of horses standing near the fence along the road, one may be startled by my approach, and they will all start running along the fence with me, keeping pace and watching me out of the corners of their eyes. It’s a wonderful, enjoyable occasion.”

Bicycling can be enjoyed by everyone, from riders who live for long, challenging bike rides and organized events to those who prefer to meander on a trail, stopping to check out nature or a store along the way. There are dedicated rails-to-trails pathways, roads with bike lanes, mountain bike trails, city loops and country roads for cyclists to explore. Here are a few ideas to get you started.

To experience the Bourbon Trail by bicycle, Thomas recommends a loop tour that includes several of central Kentucky’s distilleries. Thomas, who has worked with the Kentucky Distillers’ Association to map cycling tours for Bourbon Trail visitors, recommends this route for experienced cyclists because of the 55-mile loop and some difficult terrain. For a shorter, easier trip, leave a vehicle at one of the stopping points or make arrangements to spend the night at an area hotel or bed and breakfast to enjoy a more leisurely pace.

Wild Turkey Distillery near Lawrenceburg is 11 miles down the road over a narrow bridge. Explore the distillery perched atop Wild Turkey Hill, where bourbon has been created for the last 75 years. The next stopping point is Four Roses Distillery south of Lawrenceburg, at mile 18 along the Salt River. If you’re traveling the 55-mile loop, there is an option at mile 46 to veer off for a visit to Frankfort and Buffalo Trace Distillery before heading back to Woodford Reserve.  View the loop

This total 15-mile round trip ride is a pleasant way to enjoy Owensboro as a river city. Ride the entire route or turn around a bit sooner to spend some time in nearby Western Kentucky Botanical Garden or Smothers Park. The park features a water-play area and fountains that put on a show throughout the day.

Paula Hayden, a member of Bicycle Owensboro, says this route is used as the 15-mile, family-friendly ride for the Bourbon & Bluegrass Century fundraising event held each August.

“This is a ride with very little elevation gain that parallels the scenic Ohio River,” Hayden explains. “It is on country roads with little vehicle traffic, which makes for not only a beautiful ride but also a peaceful one.” 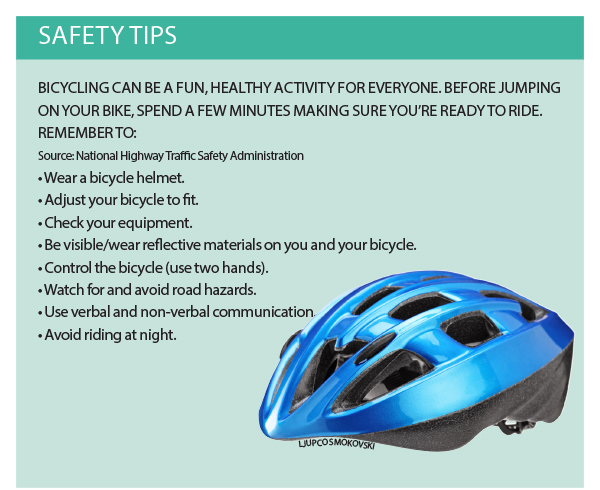 “Most people think of the Gorge as a great destination for hiking, but cycling on the local roads provides an opportunity to experience the area in a slightly different manner,” Hellman says. “The roads are lightly traveled, and during the summer, there’s the added benefit for cyclists of having a canopy of trees over many of the roads that protect against the direct sunlight.”

Climbing some of the hills can be challenging, he warns, but riders are rewarded with wonderful vistas at the top. To View the route

Would you rather bike on trails instead of sharing the road? Here are some trails throughout the state to explore.

This 10-foot-wide asphalt path, which meets Americans with Disabilities Act standards, encircles Owensboro and is near the Kenergy Corp service area. It links the city’s parks, neighborhoods, schools and businesses, including the Joe Ford Nature Center.

When completed, the Dawkins Line Rail Trail will be the longest rail-to-trail in Kentucky at 36 miles, near the Big Sandy and Licking Valley RECC service areas. The second 18 miles will stretch into Breathitt County. The trail currently runs from Hagerhill in Johnson County to Royalton in Magoffin County and features 24 trestles and the Gun Creek Tunnel, which is 662 feet long. The trail follows the old Dawkins Line railroad bed that runs from Hagerhill to Evanston.

The Clyde F. Boyles Greenway Trail, also known as The Greenway, is dotted with distance markers, shelters and benches. Near the Jackson Purchase Electric Cooperative service area, it links Paducah’s neighborhoods, parks and natural areas. There are plans to extend the trail along the Ohio River riverfront and through the Perkins Creek Nature Preserve.

The popular, shared-use greenway trail connects downtown Lexington with area neighborhoods, parks and historic sites, including the Kentucky Horse Park. About 8 miles is off of roadways and the entire route is paved.

The Louisville Loop will eventually be a 100-mile trail system that will encircle the city and link existing and new parks and neighborhoods. Currently, about 49 miles in the Ohio River Valley area and Floyd’s Fork area are open to cyclists.

Greenville, Powderly and Central City are the stops along this rural southwestern Kentucky trail. From Greenville, it runs along U.S. Highway 62, then turns into the woods in Powderly, runs through the everglades and then back into the woods of Central City, ending at the Central City Convention Center. Some of the region is in the Pennyrile RECC area.

Susan L. Moore is a freelance writer who makes her home in the capital city. She enjoys exploring Kentucky one story at a time.