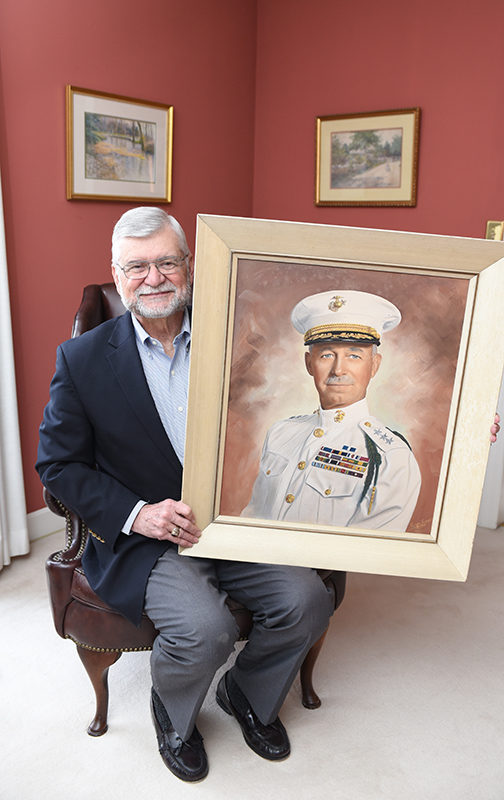 Robert S. “Bob” Silverthorn Jr. has a lot of his grandfather, Merwin Silverthorn’s, memorabilia, including this portrait, which shows many of his medals earned during his career. Photo: Jolea Brown

World War I Centennial commemoration at its peak this year

Merwin Silverthorn listened. The Marine lieutenant heard the distinctive bursts of machine gun fire as he and his platoon defended the Marne sector of France from the advancing German Army. Their mission: stop the Germans from crossing the Marne River at Château-Thierry.

Although still heavy and crude, machine guns were the latest technology when World War I began and were the weapon that defined the “war to end all wars.” With their intense machine gun fire, the Germans had Silverthorn and his platoon of Marines pinned down, according to Silverthorn’s grandson, Robert S. “Bob” Silverthorn Jr. of Louisville, who recounts the story.

But Lt. Silverthorn heard something else, too—an intermittent, short-lived quiet of the machine guns. He suddenly understood: It took time to pull the machine gun apart and load a new belt of ammunition on the gun’s belt—time when the gun couldn’t be fired. There also were times when the guns got hot and had to be cooled. Silverthorn timed those pauses and realized those slivers of time represented a small window of opportunity.

When he heard the next pause, Lt. Silverthorn moved forward, firing into the enemy stronghold. Other Marines followed, and they overran the enemy. Bob Silverthorn Jr. says his grandfather was wounded but alive when the French American counteroffensive forced German withdrawal, effectively saving Paris.

It was the second time he had been wounded. The first time was during the Battle of Belleau Wood in 1918. He was one of only four Marines in his platoon to make it across the battlefield on the first day, receiving a battlefield commission for his effort, his grandson says.

This act of courage and intelligence was only one of the many heroic acts he undertook. In WWI he was awarded the Navy Cross, Distinguished Service Cross, two Silver Stars and a Purple Heart. He retired from the United States Marine Corps as a three-star lieutenant general after 37 years of service, having also served in WWII and the Korean War.

A new way to remember

The WWI Centennial commemoration—which began April 6, 2017, and concludes in the summer of 2019—includes myriad activities as diverse and intriguing as the people who served.

“It is our mission to promote events, highlight important historic dates, and to honor our military and civilians who served and gave the ultimate sacrifice for our freedoms,” says Heather French Henry, deputy commissioner of the Kentucky Department of Veterans Affairs.

Step inside the war

One of the most ambitious projects included in the centennial is an extensive exhibit at the Kentucky State Fair, August 16-26 this year. The exhibit covers an array of topics, including WWI technology, animals in war, WWI medicine, volunteers, the home front and life as a soldier. It began last year and will continue this year with some new elements.

The kind of trench that might have sheltered Merwin Silverthorn is one example. Visitors can walk through a 40-foot trench created from approximately 480 sandbags donated by Fort Knox and filled by Boy Scouts with 20 tons of sand donated by the Louisville Metro Sewer District. In the trench, fairgoers will hear battle sounds and use a working periscope to see beyond the sandbag wall.

The life-size exhibit of a barracks at Camp Zachary Taylor will be in South Wing B. Built 6 miles from downtown Louisville in the late summer of 1917, Camp Zachary Taylor was the largest WWI military training camp in the U.S. at the time, according to Louisville’s Filson Historical Society. More than 150,000 men were trained there and a total of 250,000 were housed there at some point during its three-year history. The exhibit includes an actual cot from the era that visitors can try out. (See page 30 for more).

Among other WWI attractions at the fair exhibit, the medical and African-American displays feature listening stations on WWI-era phones; authentic WWI artifacts, including bolt-action rifles issued to soldiers and pistols issued to officers; and a county-by-county list of Kentuckians who died in WWI.

The KY Poppy Project is another program of the Kentucky WWI Centennial. Created by Henry, this effort was inspired by the 5,000 Poppy Project in Australia, where schoolchildren handcrafted poppies in remembrance of Aussies who fought in the war. After the war, the poppy was adopted worldwide as a symbol of WWI remembrance, largely because of a Canadian doctor-turned poet. In spring 1915, Lt. Col. John McCrae was inspired by the sight of poppies growing in battle-scarred fields and wrote a now-famous poem called In Flanders Fields.

“This activity is for people of all ages, groups and organizations,” Henry says. “Everyone can get involved in honoring our history in WWI. Throughout our website (www.veterans.ky.gov) Kentuckians will find information, links and ideas about how they can become an official ‘Poppy Partner.’ Visitors to the Kentucky State Fair can also stop by and create a poppy.”

Other organizations are also spotlighting WWI to acknowledge the war’s centennial. The Filson Historical Society in Louisville has an exhibit documenting the construction of Camp Zachary Taylor. Visitors can follow the construction of the camp through a large group of photographs showing its progress. The photos detail how the land was cleared, including the burning down of old houses and barns, the construction of barracks and mess halls, and snapshots of the first recruits going through processing stations.