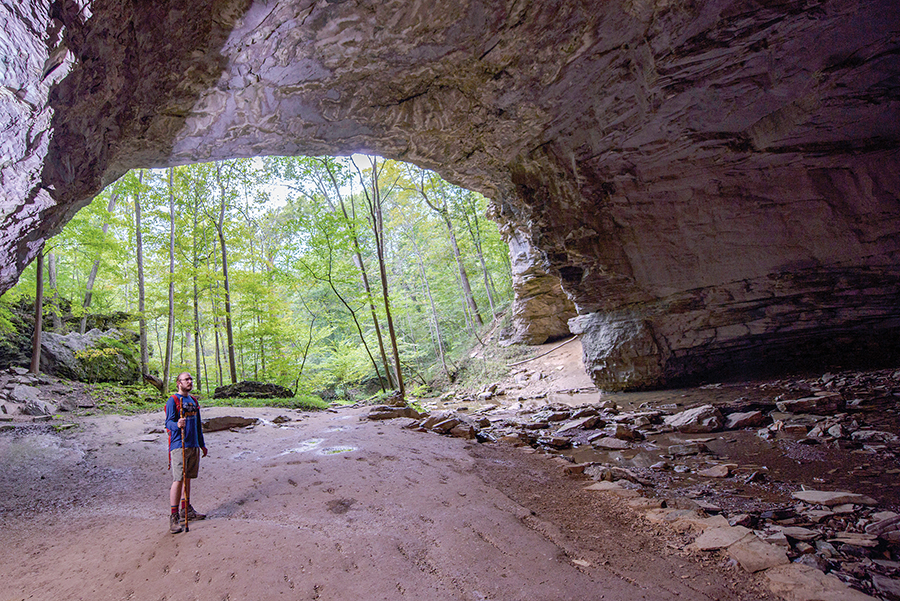 Enjoy adventures above ground and below

Whether it’s exploring underground, hiking a trail, paddling a kayak or revving up your all-terrain vehicle, if you’re looking for outdoor fun, Carter County in northeastern Kentucky has something for you.

Carter Caves State Resort Park has been attracting visitors since 1940. There’s also Grayson Lake State Park, with its popular golf course and the 1,500-acre lake created when the U.S. Army Corps of Engineers dammed the Little Sandy River in the 1960s. And now in its seventh full season is Rush Off-Road, which offers more than 100 miles of trails for all kinds of fat-tired vehicles.

The county, named for state Sen. William Grayson Carter, was formed in 1838 from sections of Greenup and Lawrence counties; parts later were split off to form Boyd and Elliott counties.

Native Americans once lived in what is now Carter County. Salt deposits along the Little Sandy River began attracting European settlers to the area in the late 1700s and salt extraction was a major industry for decades. Saltpeter was mined there during the War of 1812 and coal mining began in 1850. Iron furnaces operated in the 1800s. Later, there were brickyards and a chewing tobacco factory.

Today, large portions of the county are in the Grayson RECC service area.

A broad, upward fold of Mississippian limestone, combined with water and time, has resulted in at least 20 caves beneath the 2,000 acres of Carter Caves State Resort Park. Two caves are open for tours year-round. Two open only in the summer because endangered Indiana bats hibernate in them during the winter.

“We also have a lot of above-ground natural features that are sometimes overshadowed by the caves,” says park naturalist Coy Ainsley. “We have seven natural bridges that are highlighted by our trail system. And we have a box canyon.”

One of the natural bridges, Fern Bridge, has a 120-foot span. Ainsley says that ranks it in the top five among natural bridges east of the Mississippi River.

There also is a rappelling and rock-climbing area, plus 30 miles of trails, half of which can be used by people on horses or mountain bikes.

In early spring, when Tygarts Creek is flowing nicely and the wildflowers are in bloom, the park offers 6-mile canoe and kayak trips through one of Kentucky’s most beautiful limestone gorges.

For paddling fun later in the summer, there is a small lake at Carter Caves and the much larger Grayson Lake adjacent to the 1,512-acre Grayson Lake State Park. Grayson Lake also has a marina outside the park for larger boats. It is a good place to catch bluegill, channel and flathead catfish, and hybrid striped bass.

A big draw at Grayson Lake State Park are the bent-grass fairways of Hidden Cove Golf Course. But the lake’s 100-foot sandstone cliffs, caves and waterfalls are increasingly drawing paddlers.

“Kayaking has really taken off in the last few years and it really helps keep our campground full,” Park Superintendent Steven Kennedy says.

The main draw is a place called The Grotto. Paddlers also can slip through a crack in the rock behind Hidden Falls to enter a “secret” cove.

For a different kind of park, there’s Rush Off-Road’s 7,000 acres near the unincorporated community of Rush on the Carter-Boyd county line. It’s a BYOORV (bring your own off-road vehicle) kind of place: That means motorcycles, ATVs, utility task vehicles, dune buggies and many other kinds of vehicles. The way it works is you buy a daily, monthly or annual pass for your vehicle and let ’er rip.

There are, of course, rules: No alcohol, drugs, explosives or littering allowed, and no riding double on ATVs designed for one. Extra safety features such as roll bars and helmets are required in some circumstances, and everyone must sign a liability waiver.

E.B. Lowman, who owns Rush Off-Road with his wife, Lindi Lowman, says the park gets more than 40,000 visits a year. It has attracted people from every state and several foreign countries. But most come from a circle of states that includes Michigan, Alabama and Georgia.

“I’m a local kid and I grew up here,” Lowman says. “I think it’s neat to have people coming to this area.”