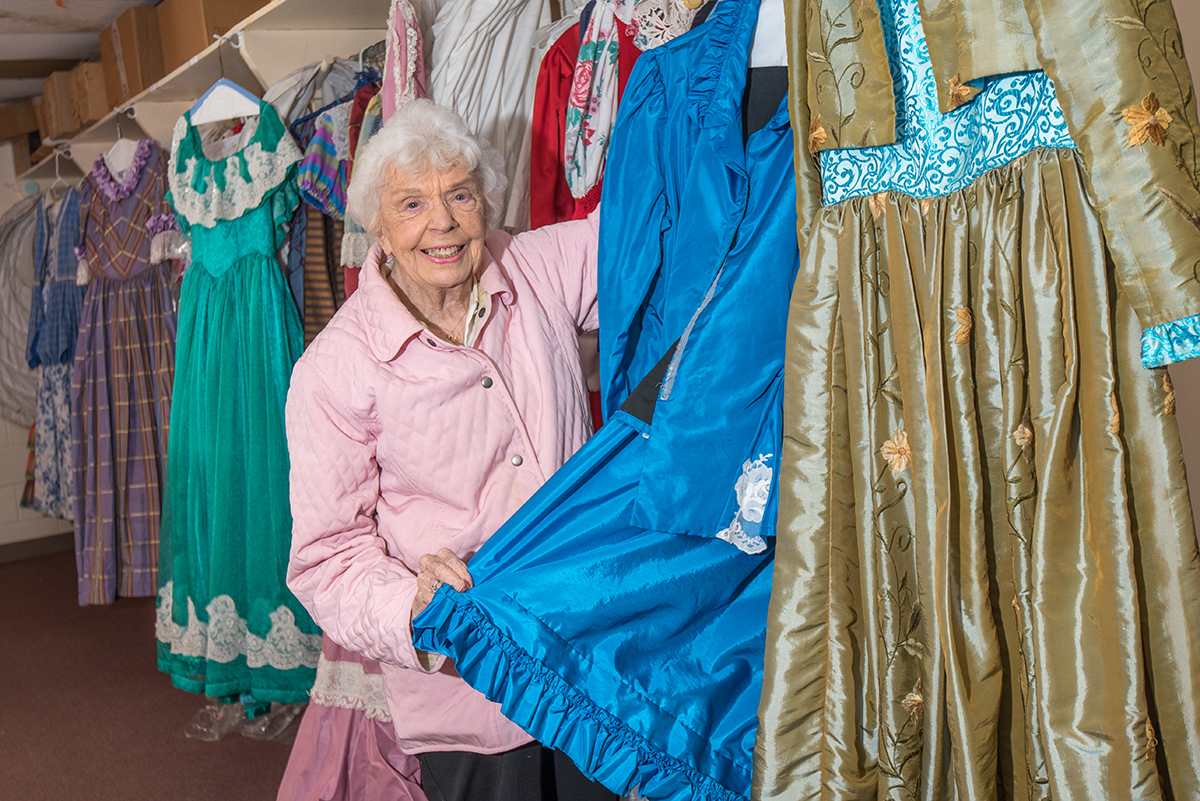 “I accepted the job, and then I called back to ask, ‘Oh, do I have to sew?’” says Si Arnold, costume designer for The Stephen Foster Story in Bardstown. “I wanted a job, but not bad enough to sew. They said I could hire seamstresses, that made me happy.”

Anne Salyers Arnold, who became known as Si while attending Western Kentucky University, was born in Frankfort and raised in Danville on a large farm.

Arnold says, “My mother wanted me to be a teacher, but I majored in Buddy Arnold,” referring to her husband from Bardstown. She says, “Buddy managed his family’s two movie theaters at night, the Melody and the Arco,” while Si raised their three children and volunteered by day teaching adults sewing in the Bardstown public schools.

“The Stephen Foster Story summer outdoor musical is in its 59th year,” says Johnny Warren, managing artistic director, and for the past 52 seasons Arnold has been designing the production’s costumes. “All my children are retired, but not me,” laughs Arnold, who turned 97 in January.

During the production season, Arnold spends evenings in the dressing room located behind the stage. “I serve a dual role: as a costume designer, then I turn into a wardrobe mistress. I keep the costumes in really good shape. If they tear, the cast members bring them to me and I mend them.

“I am here every night, from 7:30–11:30. I am the last one out of here. My clock is better at night,” smiles Arnold, who gets around exceptionally well as she leads us backstage, stopping to feed the resident cat. “The costumes are dry-cleaned once or twice during the performing season, and we wash the men’s shirts each night.”

Arnold says she plans to slow down a little this year and not be on site every night, only because she does not want to drive at night.

“There are two sets of each costume—one for the cast member and one for the understudy,” says Arnold. As she pulls out dress after dress in the dressing room, Arnold recounts why each costume is memorable as she shares where the fabric came from (her favorite bought while on tour in Japan), which character wears the dress, and the intricacies involved in creating each. The costume creation includes “accessories and making all the bonnets, along with adding rhinestones on the dresses—just not the shoes,” says Arnold.

She says there are more men’s costumes in the production than women’s. Arnold designed the men’s clothing up until four years ago, and now uses a tailor.

Arnold used to design the costumes for the season’s second production, but no longer does. “For Hello Dolly,” she laughs, “we literally costumed everyone out of the attics around Bardstown. We rented the apron and the embroidered and sequined bib from an Indiana production. I made the red dress that goes under it,” Arnold explains. “People are forgiving as long as we have the look. The productions didn’t use to start on daylight saving time. Now, there is more darkness, so you can get by with a lot more.”

The costumes that Arnold has designed over the past five decades fill a huge barn-like dressing area. “There are more than 100 costumes worn by 45 cast members on stage every night, and we have an attic full of costumes too.” Arnold says most of the costumes are still being worn, and she designs approximately four new costumes each year to add to the collection.

When asked what her favorite costume is from the hundreds, Arnold replies, “Well, I think the Lucy costume (from Stephen Foster). It is the most expensive and is still worn today. It’s the gray one that has the larger hoop, and the understudy wears the older one.”

Arnold’s eyes dance as she holds a hoop skirt and describes how the hoops for the dresses are made. “One of the first things I did the first year was to make good hoops because they are used every evening. The older ones would roll up as they were on tape. But we invested in good steel hoops. They are expensive and are covered with a cheesecloth

material, which are sewn into sleeves made at the bottom of the dresses.”

Her advice for teaching a young person to sew: “Buy a really good machine, about a $500 one.”

Only once has Arnold tried on one of her costumes—Sharon Brown’s—“due to a dare by one of the guy cast members in ‘The Minstrel Show’ scene of Stephen Foster. I walked out on stage, and sat on the benches with the other cast. Director Horace Kelly met me at the side. He just looked at me, but I knew never to do that again.”

Arnold explains the costumes for the Stephen Foster production do not require an updated look. “No, the look has to be the same. While we take artistic liberty to use different fabrics and decorations, we cannot change the overall silhouette and impression of the costumes for the time period.”

Arnold treasures when The Stephen Foster Story was taken on the road. “Twice the entire cast went to Japan for two weeks, in 1985 and 1997. That was under artistic director Scott Ray. They paid our way and gave us enough money to eat.”

She explains that back then Stephen Foster was taught in the schools, and in Japan he was very popular. “We were treated like royalty, wined and dined. My youngest daughter, Mary Beth, who was in the production at the time, went the first time. We played in two theaters in Tokyo, one in Kyoto, and one in Osaka. It was performed in English, and along the sides they had a tall board that had translation in Japanese.

“The most exciting thing that ever happened is when the bus got loose. A Greyhound bus had brake problems. Everyone on stage looked up and here comes this bus, down the right side of the hill. It stopped right before crashing into the cast. It tore down walls, and the audience didn’t even see what was happening.

“Another time we got caught in a flood during a performance. There’s a creek that is located at the side of the stage area and we had to pack up and move to the high school in Bardstown.” Arnold explains that during rain or storms, the regular performance is held indoors there. “Everybody takes their own costumes.” The Saturday matinee is performed at the Bardstown High School, where a complete stage set remains on location.

Arnold researches her costume design using an extensive book collection, noting that it keeps her on the straight path. She says, “In that period, women did not dance onstage, but these costumes are made to move. The cap sleeves do not come down as far on the arm and are made a little wider.”

When asked if she sketches her designs, Arnold giggles. “Let’s put it this way, I draw stick figures. I put my time in on the fabric, not on paper. I cut the patterns out of anything, although I don’t have to do that anymore as I have a huge collection of designs on file.”

What’s the best part of Arnold’s job? “The people. I have made such good friends from all over the place.” And what are your tricks of the trade? “It’s all trickery—it’s all an illusion.”