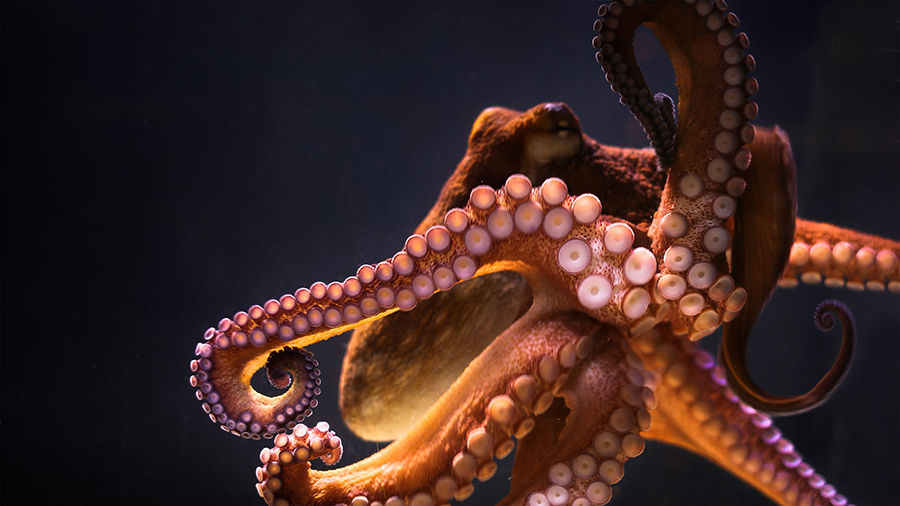 Dive into the World of the Octopus at Newport Aquarium

Gently drifting moon jellyfish, their tentacles trailing through the water. A leggy, crunchy-looking Japanese spider crab, its body fully armored to protect it from predators. A shape-shifting giant Pacific octopus, the quick-change escape artist of the cold-water coastal kingdom.

Enter the Ring of Fire: World of the Octopus, the newest exhibit at the Newport Aquarium, and step inside the Octopus Den. Here, the darkened hush of this cave-like environment is broken periodically by glowing light and low rumbling that help immerse visitors into the deep—the special effects inspired by the volcanoes and earthquakes that carved the sea floor, caves and other rock formations of the Pacific Ocean.

As Newport Aquarium Executive Director Eric Rose describes this mysterious underwater world, visitors experience what it is like to live “deep under the ocean and the ocean trenches around the Ring of Fire with these animals.”

There are three zones in the exhibit—the Octopus Den, a picture-window display of the moon jellyfish and a cylindrical tank that affords a 360-degree view of the Japanese spider crabs. Videos and interactives narrate the story of this ever-changing ecosystem and its extraordinary inhabitants.

The Ring of Fire exhibit takes its name from the horseshoe-shaped geological area around the edges of the Pacific Ocean that is characterized by nearly constant volcanic and seismic activity (not the 1963 Johnny Cash song of the same name).

It’s among Newport Aquarium’s 65-plus exhibits, all awaiting at the bottom of the entrance escalator visitors glide down to begin their journey, starting at World Rivers.

“The aquarium is like visiting another world,” says Rose. “The underwater experience is so different, it really captures the imagination and takes visitors out of their day-to-day lives and makes them slow down a little.”

Located at Newport on the Levee, the aquarium is among numerous entertainment options at this premier dining and attraction destination along the Ohio River. It is situated at the far end of the plaza level, treating visitors to a sweeping view of the Cincinnati skyline as they make their way across the square.

From penguins to shark rays

Major crowd pleasers at the aquarium include Penguin Palooza, particularly during show time when the tuxedoed charmers are coaxed into their most engaging behaviors; the 32-foot-long, see-through Amazon Tunnel where dozens of fish species swim around and above you, including one of world’s largest freshwater fish, the arapaima or bonytongue; and the magical Seahorses: Unbridled Fun exhibit with its colorful seahorses, sea dragons, razorfish and pipefish, with a giant video screen tracking their movements.

Among kid faves are the “please do touch” sea stars, horseshoe crabs and anemones in the Tide Pool in the aquarium’s Shore Gallery; and the Frog Bog, where 20 species of exotic frogs reel parents in for a peek while the kids romp on the giant frog statues, pounce on the frog pads at the Frogger game, play hide-and-seek in the maze-like Frog Bog jungle gym and zip from one interactive to another.

For all visitors, the rock stars of the aquarium are Sweet Pea and Scooter, celebrities of the first shark ray breeding program in the world.

“There are only about 10 shark rays under professional care in aquariums so we’re extremely honored to get to present Scooter and Sweet Pea to our guests every day,” says Rose.

Neither shark nor ray, these prehistoric-looking creatures have human-like eyes, endearing visages and magnificent grace, all of which belie the savagery of the jaw- and teeth-crushing eating habits when they belly up to bite into their beloved crabs and lobsters.

“We regularly interact with guests who had no idea these creatures even existed, so to introduce them and start them on a path of caring for the well-being of this species is really special for us,” Rose says.

Besides its 1 million gallons of salt and fresh water, hundreds of aquatic species and thousands of animals from around the world, the Newport Aquarium has Sharky’s Café and a well-stocked gift shop, the last stop before leaving.

Time permitting, plan to include a visit to Sweet Dreams Candy Co., next door to the aquarium. Sample a free piece of fudge while choosing among sweet treats like saltwater taffy, Dippin’ Dots ice cream, cotton candy, Swedish Fish and more.

Stroll through the streets of Newport, once known as Sin City—Las Vegas before Vegas was Vegas.

This storefront theater has a long tradition of exceptional theater staged in an intimate space. Five shows are produced, September through May.

Free 45–60-minute tours of the distillery include a complimentary tasting of a variety of spirits. Tours are noon–4 p.m. Tuesday–Sunday.

Newport on the Levee

Home of the Newport Aquarium and Sweet Dreams Candy Co., and lots of shopping, dining and entertainment options. The Live at the Levee free summer concert series will be in full swing: August 9, My Sister Sarah; August 16, Pandora Effect; August 23, The Menus; and August 30, Naked Karate Girls.

This circa-1872 bridge is now a pedestrian-only bridge stretching a half mile across the Ohio River.