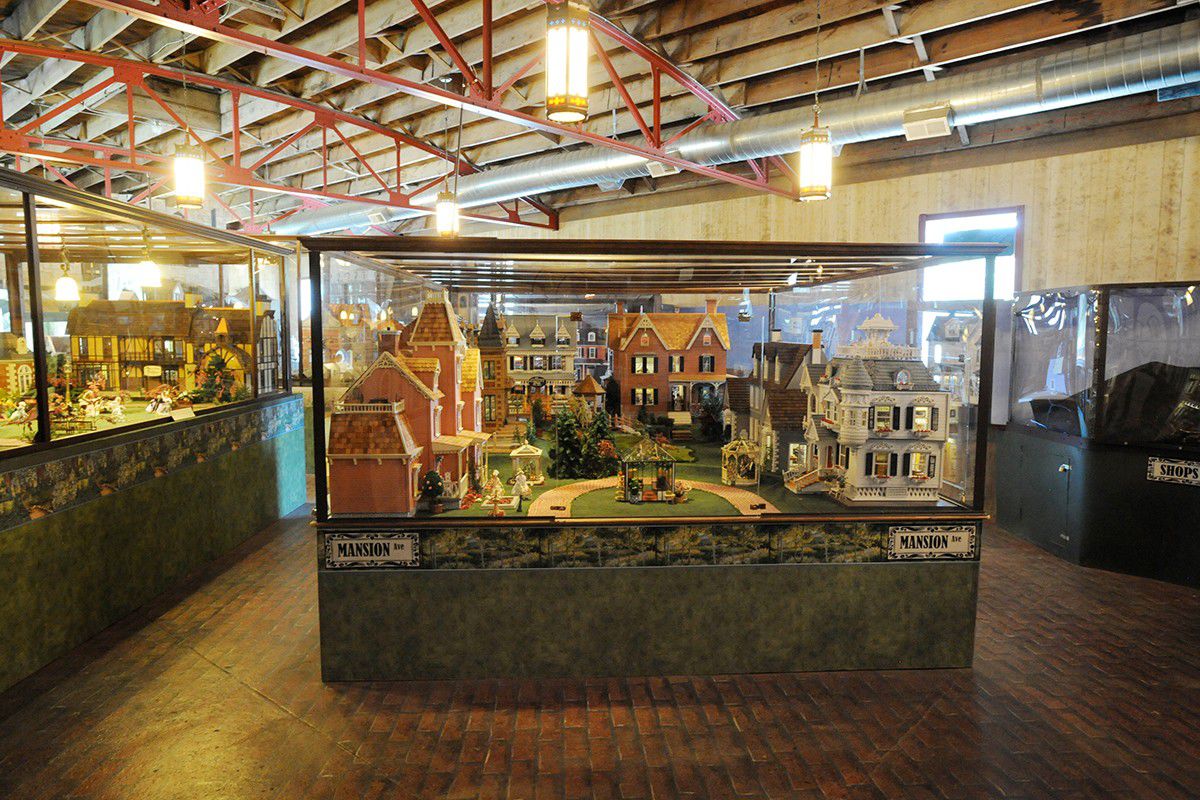 Out of a handful of dollhouse museums in the world, only Danville’s Great American Dollhouse Museum focuses exclusively on American social history. Photo: Clay Jackson

Sprawling but painstakingly detailed, enchanting yet reality-based, there’s only one like it in the entire world. The Great American Dollhouse Museum in downtown Danville is more than a carefully curated and displayed collection of dollhouses; it is the only museum of its kind specializing in portraying the social history of the United States through miniature vignettes that narrate the everyday life of ordinary people.

Even the 6,000-square-foot building housing these charming history lessons is significant: it is a 1939 National Guard Armory with 20-foot hardwood ceilings and steel bowstring trusses built by the Works Progress Administration—better known as the WPA—a program created by President Franklin D. Roosevelt that put millions to work during the Great Depression.

Inside are dozens and dozens of dollhouses and boxes that are set up as miniature rooms, from sweet relics made to be played with by generations of children to look-but-don’t touch contemporary artisan pieces, including several by Midwest miniaturist LaVerne Sullivan (known as the “Norman Rockwell of miniaturists”) and Brooke Tucker, whose room boxes are nothing short of masterpieces in miniature.

Call it “reality shrunk down,” as museum director and curator Lori Kagan-Moore does.

Visitors begin their journey at a Native American display and move along the museum’s timeline to the Colonial period, the Civil War era, the Old West, and the 20th century. When you enter the fictional town of Copper Hollow of a hundred years ago, you’ll find shops, churches, business and factory districts, Courthouse Square, and a neighborhood of mansions, all filled with the trappings of 1910 small-town America—not to mention people representing all socioeconomic groups and garbed in historically accurate raiment.

[pullquote cite=”Lori Kagan-Moore” type=”left”]”On one hand, you’ll visit the mansion districts, where opulent wedding receptions take place and hotel visitors dine on sweet-smelling pastries. But on the other hand, you’ll visit the wrong side of the tracks, where women and children work long hours in factories before the days of child labor laws.”[/pullquote]

Humor and historical detail are woven throughout the museum’s vignettes, from a circa-1959 Christmas setting advertising slingshots for 50 cents, to a modern scene with hot tub and cell phones, to enchanting displays near the walk-in dragon cave and Fantasy Forest, home to fairies, trolls, and witches. Not far from the posted warning, “Danger—Unnatural forest ahead! Turn back now!” there are captions posted on the bottom frame of the cases, treating visitors to the musings of two of fairy tales’ most famous denizens: the Evil Queen and Snow White.

“The castle has potential, but I don’t know what to do with that insufferable, fairer-than-thou Miss White!” the queen says.

“Stepmother is queen now and can redecorate as she pleases, but all the mirrors make my head spin,” Snow White confides.

Opened in 2008, this homage to daily life in miniature is one of a select group of attractions in the Bluegrass that can be found nowhere else in the world. Interestingly, it spotlights another unique Kentucky landmark in one of its exhibits: a dollhouse donated by Shaker Village of Pleasant Hill, 15 minutes away outside Harrodsburg.

The dollhouse is part of the museum’s Shaker Village at Copper Hollow vignette, a fictional village that captures the essence of the Shaker lifestyle through buildings, including a handmade circa-1900 Meeting House, with their architectural elements such as the double staircase (one for men, the other for women) and craft industries reflecting the Shaker principle of simplicity.

With more than 200 extraordinarily detailed dollhouses, miniature buildings, and room boxes, visitors are privy to plenty of stories and even a few secrets as they make their way from neighborhood to village to forest—from how we lived in days gone by, to dollhouse collecting and its changing meaning, to the goings-on in a fictional town of tiny people.

Vent Haven Museum, 33 W. Maple Avenue, Fort Mitchell; (859) 341-0461, www.VentHavenMuseum.com. Dedicated to the art of ventriloquism, it is the only museum of its kind in the world. Housing more than 850 dummies, Vent Haven offers visitors a one-hour guided tour to learn the history of ventriloquism, from 18th-century performers through today’s most well-known ventriloquists. Hours: Open May through September. All tours are guided and by appointment; times are flexible. Donation: $10 adults; $5 seniors, children 12 and under, and groups of 10 or more.
Kathy Witt from February 2015 Issue Keegan Andres and Clay Jackson