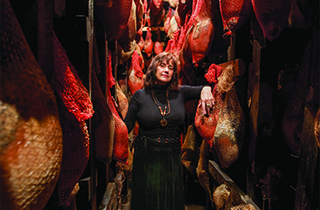 “Country hams are the culture and heritage of this area,” Nancy Newsom Mahaffey tells me as I sample a slice of her wonderful “preacher” ham that is slow cooked over a hickory pit for hours—not to be confused with country ham. (Preacher ham is so named by customer Betsy Hooks, who regularly served Newsom’s barbecue ham to evangelists visiting her and her Baptist minister husband.)

We’re standing at the deli case at Newsom’s Old Mill Store in downtown Princeton and I’d just asked Mahaffey, aka The Ham Lady, why she thinks there are so many marvelous artisanal ham makers tucked away on the back roads and small towns of scenic western Kentucky.

Her answer makes sense. Over the last few days, tracing what I call a culinary artisanal ham and bacon-crafters trail, I’ve met people who still cure and smoke hams in the slow, laborious way of much earlier generations.

Indeed, family genealogists traced Mahaffey’s family, the Newsoms—originally Newsham—back to 1642 when they arrived in Jamestown, Virginia. They most likely learned the curing process from Native Americans who used smoke and sea salt to preserve venison, and applied it to hams when the Spanish brought pigs to the country later in that century. The store where Mahaffey sells her hams, sausages, and other meats is in a building dating back to 1850. With age-darkened and worn poplar floors, shelves filled with jams, jellies, biscuit mixes, pickles, and barrels brimming with wrapped candies, it retains the spirit of the general store her grandfather first opened in 1917.

Back then, her grandpa didn’t sell his coveted hams, says Mahaffey, whose dry-cured hams, hand-rubbed with salt and brown sugar, and bacons have found their way into restaurants such as those owned by food magnate Bobby Flay and the venerable Brown Hotel in Louisville.

“Everyone made their own hams back then,” Mahaffey says. “But that changed as younger generations lost touch with the art of curing and people started wanting to buy hams.”

She says Kentuckians like her father refused to give up the old ways (mention grocery-store hams to artisan curers and you can definitely hear a sniff of disdain for those waterlogged pieces of meat) and instead went retail, using family recipes to create superior country hams.

Charles Gatton Jr. of Father’s Country Hams in Muhlenberg County near Bremen is one of a handful sticking with tradition.

“I was about 5 years old when I started helping my father and uncle dry-rub, cure, and smoke hams,” says Gatton, whose family still maintains the 1,000-acre farm started by his great-great-grandparents in 1840.

It was a time when putting up food for the winter was part of farm life and many families had their own special curing recipes and techniques. Now, Gatton, who took over the retail business started by his uncle and father in the 1950s, turns out not just country hams using a family recipe more than a century old, but also bacons, pork cracklings, and sausages.

The work is labor-intensive and the shrinkage from the yearlong process of curing and aging is about 30 percent, meaning a 20-pound fresh ham might end up weighing 14-15 pounds by the time it’s ready to be sold. Country hams can be salty—after all, most dry rubs are salt, with sugar and maybe a little pepper, which preserves the hams and keeps them from spoiling during the aging process—but Gatton says that his hams have less salt than many. They have a different taste than grocery-store hams, which are injected with water and preservatives.

“A lot of the way we do things hasn’t changed that much for more than 100-plus years,” says Gatton, as he takes me on a tour where we pass rafter after rafter hung with smoked hams, their color a beautiful, rich pecan. The wooden walls are stained almost black from years of smoking, and the aroma is of hickory wood and the salty, sweet, meaty flavor of the hams.

Broadbent B&B Foods has been curing and selling hams commercially in Kentucky since 1909. Ronny and Beth Drennan bought the company in 1999, learning the secrets to making a great dry-cure ham from Smith Broadbent III and moving the company headquarters to Kuttawa in 2008. Those lessons paid off in 2011, when the Drennans won their 15th purple ribbon for Grand Champion Ham at the Kentucky State Fair.

Others ham it up

There are others in the state who handcraft equally delicious country hams; most of these are also in western Kentucky’s “ham belt.”

As Amanda Meacham Coy tells it, back in the late 1800s, her great-great-grandmother dry-cured the family’s freshly butchered pork, creating rich, flavorful country hams on the family farm in Morganfield as grandson William Meacham (Amanda’s grandfather) watched. Before long, it was Meacham’s turn and for the next few decades he made more and more hams for neighbors and friends until he decided to open a store. The year was 1932, and Meacham Hams Inc. in Sturgis, served by Kenergy electric cooperative, still uses the original recipe passed down through five generations. When Meacham died in 2004, his son Rodman Meacham (Amanda’s uncle) and granddaughter Amanda couldn’t let the family business end. Now, she says her goal is to make “Granddaddy proud.”

Harper’s Country Hams in Clinton, served by Hickman-Fulton Counties RECC, may be one of the new kids on the block when it comes to hams, since it’s been in retail business “only” since 1952. Curing hams is a longtime family tradition in this third-generation operation. It was Curtis Harper, born in 1915, who took the techniques for curing hams that he’d learned on the family farm and put them to use, buying his own plot of land and making his own hams. A friend who worked on the railroad took Harper’s hams on train trips, delivering them to thankful customers along his route. As fewer people made their own hams, the demand for Harper’s Country Hams grew and 62 years ago Harper put up a sign: “Country hams for sale.”

As a country boy who went through the Great Depression, Curtis also knew how to make do. When the time came to build a smokehouse, he converted an old two-seater outhouse. His brining vats were shipping crates used to ship caskets from a local funeral home. This dedication and ingenuity paid off: using the original, hand-rubbed, hickory-smoked recipe, Harper’s country ham, with the business now run by Curtis’ daughter-in-law, Dolores Torian Harper, and grandson Brian, was named the 2013 Kentucky State Fair Grand Champion Country Ham.

Near Greenville, artisan ham winner of 18 national championships for its dry-cured hams, is Scott Hams. “We’re the only one producing hams that started (our) own business,” says Leslie Scott, who with his wife, June, launched their business in 1965 so that June could be at home with their children (their storefront was just a couple hundred feet from their home) and Les could continue farming. But like other country ham artisans, the Scotts use a recipe passed down from his grandfather, who purchased the farmland in 1910. Over the years, Scott Hams has won 18 national championships for its dry-cured hams. Les Scott also teaches the techniques of country ham making to 4-H members, keeping the tradition going into future generations.

As Gatton says, “It’s hard work, but it’s a great way to meet people and give them something they will really enjoy.”

WHERE TO FIND HAM

Trigg County Ham Festival Country ham lovers rejoice in all things pork at this festival, held each October in Cadiz. This will be its 38th year; www.hamfestival.com.

Along the ham trail

While stopping along the way on the “country ham trail” in western Kentucky, be sure to make time to visit these:

Hickman County
Columbus-Belmont State Park, on a National Scenic Byway, is a National Trail of Tears Site, and is a stop on the Civil War Heritage Trail. It offers a plethora of outdoor activities, including birding, boating, miniature golfing, camping, and hiking. It’s at 350 Park Road in Columbus; parks.ky.gov, pull down the Parks tab and find Columbus-Belmont under Recreation Parks; (270) 677-2327.

Kentucky Great River Road National Scenic Byway parallels the Mississippi River from Wickliffe in Ballard County to Halwell in Hickman County, and again from Hickman in Fulton County to the Tennessee border; www.hickmancounty.ky.gov/recreation.