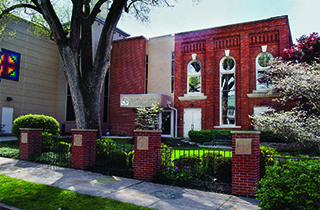 Daniel Boone, Harriet Beecher Stowe, and George Clooney have all told a tale or two about time spent in Maysville. Andrew Jackson, Henry Clay, and Marquis de Lafayette have visited, too—Clay’s signature is still visible on the register of Lee House where he stayed. Simon Kenton, the famed frontiersman who is said to have run nine gauntlets, sold some property to men who established Old Washington, the first Mason County seat. Somewhere between surviving indescribable torture and protecting new settlers in his fort or station, he saved Daniel Boone’s life.

Those are only a small number of names associated with Mason County’s 20-mile stretch of land bordering the Ohio River. The list goes on to include U.S. Chief Justice John Marshall, Supreme Court Justice Stanley Reed, George’s Aunt Rosemary, a Roman Catholic bishop, and a Miss America. They join countless pioneers, explorers, slaves, and activists who’ve forged Mason County’s richly varied history. All their stories are brought to life at the Kentucky Gateway Museum Center, where history, art, and research merge to create one of the most unique collections of Kentucky records, artifacts, and memorabilia in the Commonwealth.

Housed in three connected areas, the Kentucky Gateway Museum features the Regional History Museum, the Genealogical & Historical Research Library, and the Kathleen Savage Browning Miniatures Collection. The Regional History Museum is housed in the former 1881 Maysville Public Library building, where shelves of books have been replaced with more than 4,000 regional artifacts, dioramas, exhibits, and art pieces. A 25-foot-long timeline spanning 350 years connects an eclectic mix of facts and faces.

Maysville Mayor David Cartmell, who is on hand for an art exhibit, points out two people he knows well. “My grandmother, Rebekah Hord, was the first woman to be elected as mayor in Kentucky,” he says. “My mother, Harriett Cartmell, was also the city’s mayor.”

Honoring all their stories—courageous, sad, humorous, and inspiring—is curator Sue Ellen Grannis. While walking up the library’s original creaky wooden steps to the second floor, she throws out breadcrumbs of information. “A 1795 tall case clock was a major acquisition for the museum, as was the painting Mountain Preacher by James R. Hopkins…” A large 1880s photograph of the library reminds visitors of the building’s original purpose while another pays tribute to its first librarian, Bill Hixson. “He worked for three decades as the librarian here, starting in 1878,” says Grannis. “It’s said he lived some of those years in a shack behind the library.” Her insight into Maysville’s past and people makes a visit to the Kentucky Gateway Museum Center personal.

For many, the museum does, indeed, hold the key to unlocking family history. The Genealogical & Historical Research Library houses tens of thousands of books, documents, and photographs dating to Colonial times. The information spans seven counties and is considered one of the foremost historical research collections in Kentucky. Scholars, historians, and visitors from around the world join Kentuckians in their research here, uncovering everything from surprising family trees to the signatures of Patrick Henry and Sam Houston. “Houston’s was found on the inside of a portable map case,” explains Grannis. She credits Hixson for accumulating the library’s extensive collection of documents from the 1700s and 1800s.

History and art are also represented, albeit on a much smaller scale, in the Center’s Kathleen Savage Browning Miniatures Collection. Displayed in the museum’s 3,300-square-foot gallery, the finely detailed miniatures are reproductions of art and antique items created in one-twelfth scale (1 inch to 1 foot). The gallery features thousands of miniatures in its more than 100 room boxes, homes, and vignettes.

Maysville native Kaye Browning collected and commissioned the art pieces, several representing prominent Maysville buildings as they appeared in their heyday. The miniature of the town’s famous Russell Theatre advertises Rosemary Clooney’s 1953 movie premiere on its marquee. Browning, too, is a storyteller, describing Clooney’s insistence on having her best friend, Blanche Chambers, be part of the festivities that day. Chambers was a black woman and at the time segregation was still in force. Clooney insisted that Chambers ride in the parade with her, and she did, sitting with her on the back of the car. Later, they sat together in the “whites only” section of the theater.

It’s yet another wonderful story illustrating the indomitable spirit of people who have called Maysville and Mason County their home.

Maysville Uncorked!
June 14, 2014
4 p.m. to 10 p.m.
(606) 564-3666
www.maysvilleplayers.com
It’s the 11th year for one of Maysville’s most popular festivals. Held on Market Street the second Saturday of June each year, the event draws Kentuckians from far and wide to tour downtown Maysville while sipping wine from a dozen of the state’s leading vineyards. The Old Pogue Distillery will also be sharing samples of their craft bourbons and rye whiskies, produced with the same care and ingredients their forefathers used. The event features live music, food vendors, agritourism, and an art fair. Free admission. Wine samples start at 5 p.m. for $10.

Hats Off to History
June 4-July 12, 2014
www.kygmc.org
Explore the cultural significance of men’s hats and how they have changed throughout history in Kentucky Gateway Museum Center’s latest exhibit, Cowboys and Hatters: Bond Street, Sagebrush, and the Silver Screen. Presented by Deborah Henderson, costume designer for the Wittenberg University Department of Theatre and Dance, the exhibit focuses on the historical use of hats, hat-making techniques, hat wearing, and hat iconography. Hat-related articles of regional interest will be added to the exhibit for a local flair. For more information, go online to www.cowboysandhatters.com.

Add a Maysville tour
From bourbon to bridges, Maysville and the surrounding areas have something for everyone to explore. Call the Maysville-Mason County Convention & Visitor’s Bureau to customize your group’s tour. One week notice recommended, prices subject to change.

Maysville Floodwall Mural Project
Pick up a visitor’s guide at the Maysville-Mason County CVB and start your self-guided tour at the Limestone Landing located near the entrance on the river at McDonald Parkway and Limestone Street. Follow the murals west. Don’t forget to take a peek on the east side of Limestone Landing to see the mural dedicated to Maysville’s own Rosemary Clooney.